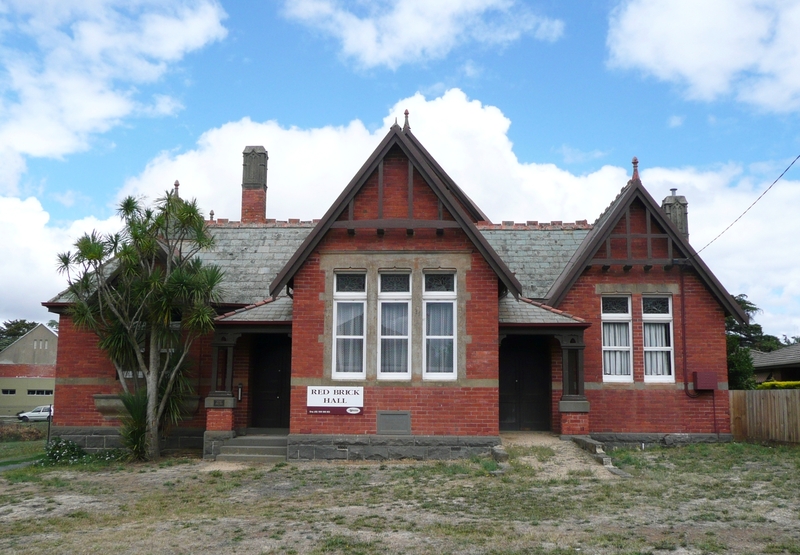 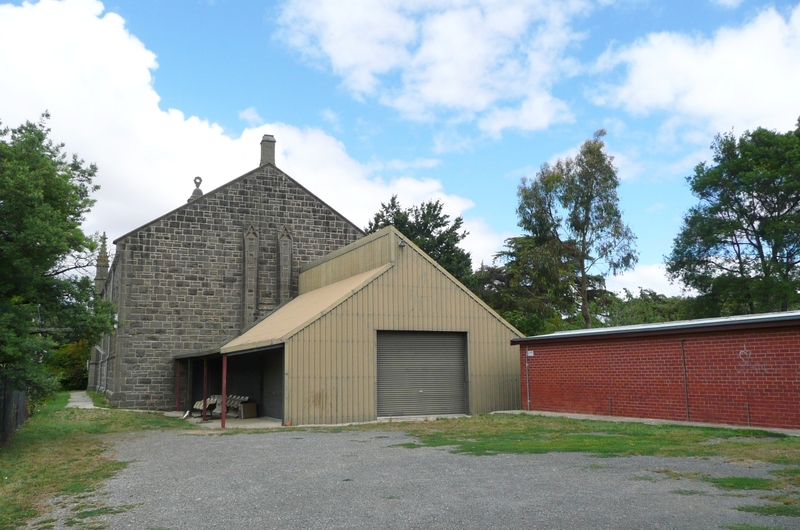 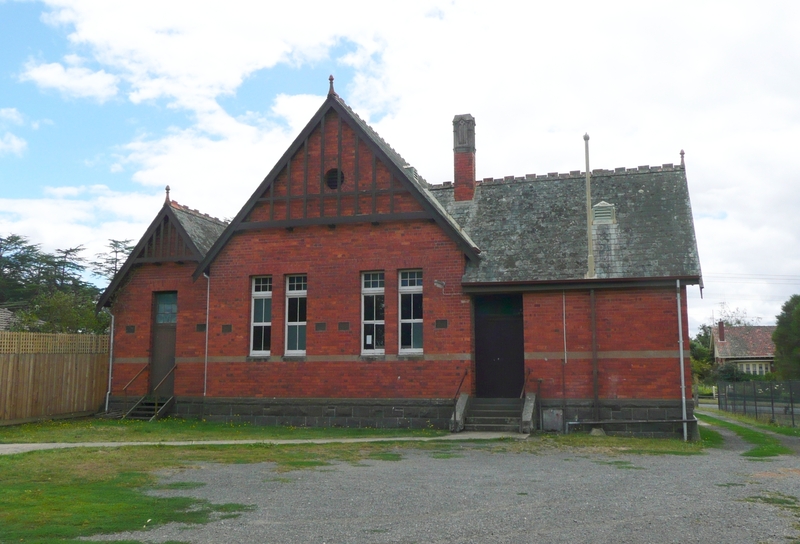 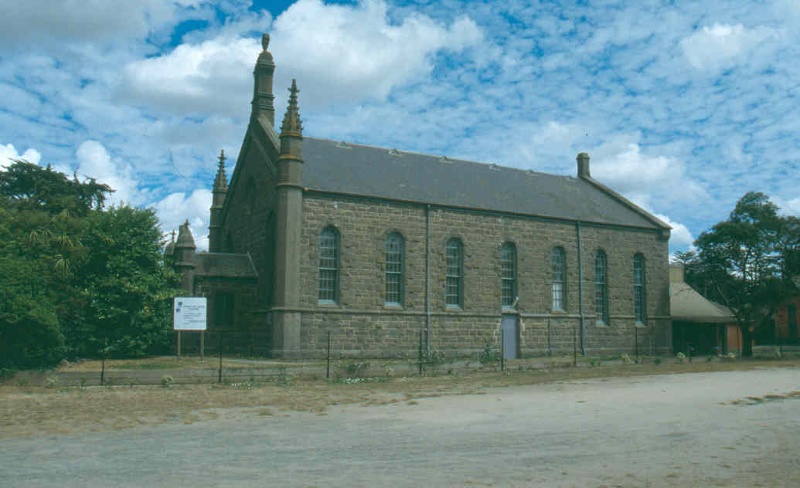 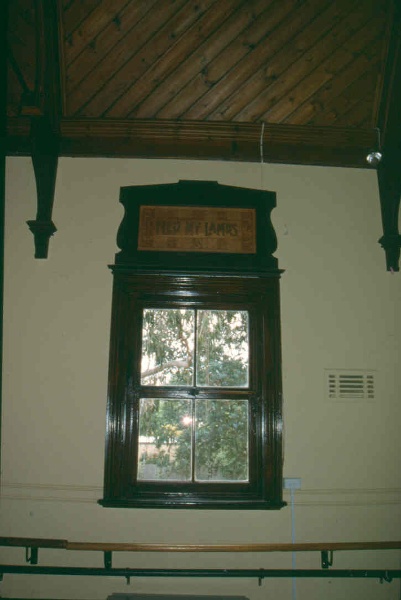 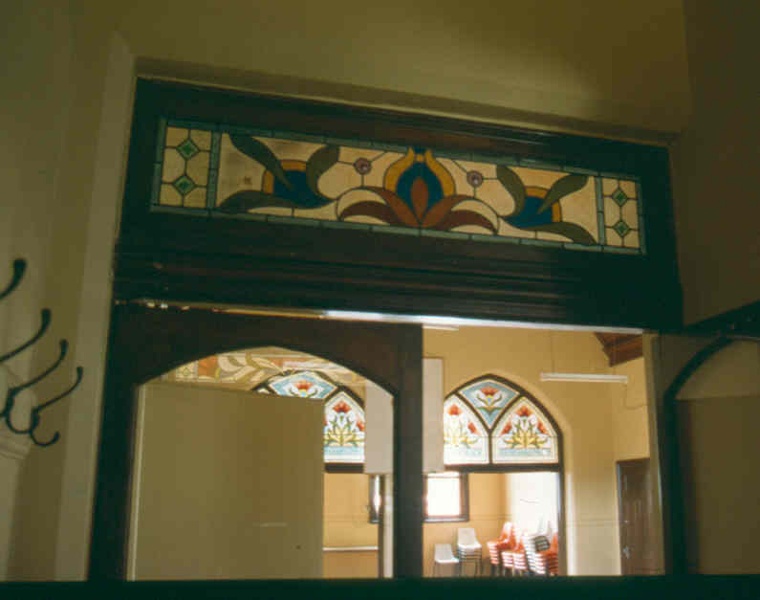 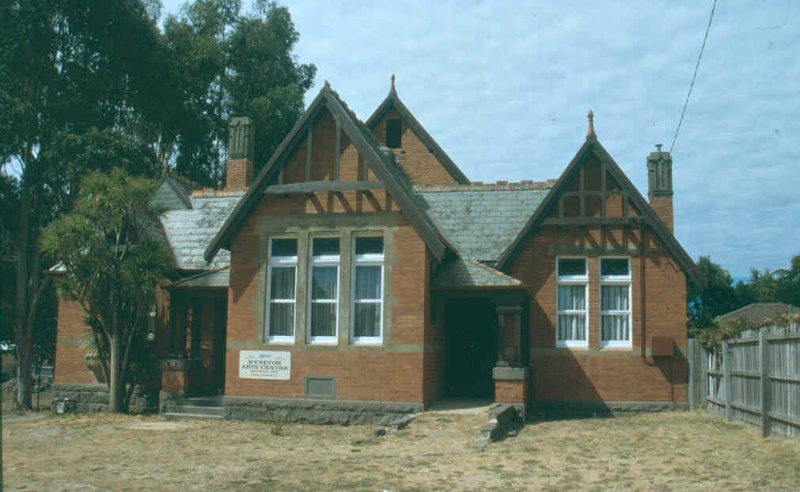 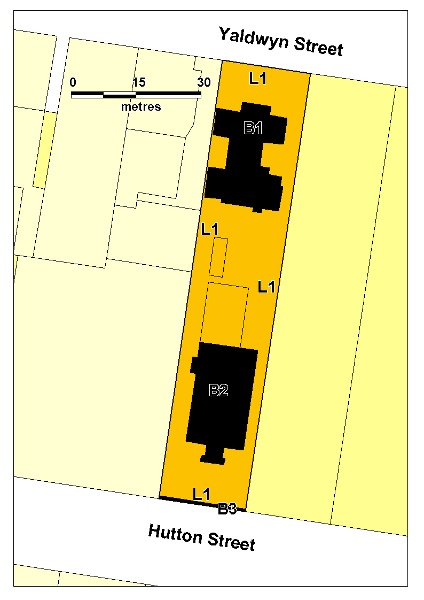 What is significant?
The Kyneton Arts Centre (Former Congregational Church and Sunday School) Kyneton was built in 1859-60 and, with its 1898 Sunday School, forms part of an important 1850s church precinct in Kyneton which includes the Anglican (1855-57), Uniting/Presbyterian (1857) and Catholic (1857-61) churches. The church, a rectangular gable roofed bluestone, building, is constructed in coursed rusticated masonry with smooth dressed corner piers. The octagonal corner piers to the main body of the church have heavily crocketted tops whilst those to the projecting central porch have a smooth top crowned by a heavily foliated finial. The belfry crowned by a perforated roundel surmounts the main facade. A chimney in the centre of the rear wall served the minister?s room, beneath the organ and platform. The original designer was architect William Douglas. Additions were made in 1871 to the design of Crouch and Wilson. At the rear is a 1980s metal sheet clad building for backstage facilities for the Kyneton Arts Centre now using the church as a performance space. No church fittings or furniture remain, apart from the organ.
.
The church contains an organ manufactured by George Fincham and installed in 1880. The only alteration to the organ has been the installation of an electric blower. The large and intact pipe organ retains its original stencilled and painted decoration and remains in its original location
The elaborate cast iron front fence and gates from Joseph Laughton?s Vulcan Foundry in Melbourne are fine examples and important elements in the streetscape.

The Kyneton Arts Centre (Former Congregational Church and Sunday School) Kyneton is a fine example of 1890s Arts and Craft architecture designed by the architectural firm of Laver, Pick and Vance and completed in 1898. The brick single-storeyed building is constructed in face brick on a stone plinth with a slate roof and timber windows. The main hall is roofed with timber trusses and a timber board lined ceiling. The hall has a number of leadlight windows. The decoration of the Sunday School, with religious texts executed in pokerwork over the windows and on the mantelpieces,
reflects its use. The blackwood mantelpieces were made by the Art Furnishing Company of Melbourne. Other furniture such as the lectern and seating has been removed.

How is it significant?
The Kyneton Arts Centre (Former Congregational Church and Sunday School) Kyneton is architecturally and historically significant to the State of Victoria.

Why is it significant?
The Kyneton Arts Centre (Former Congregational Church and Sunday School) Kyneton is historically important as an example of an intact church complex of the nineteenth century reflecting the strength of religious belief and practice in nineteenth century Victoria and the prosperity engendered by the gold discoveries which allowed for the construction of churches all over the State. The organ in the Congregational Church is associated with the prolific organ-manufacturer George Fincham who was the founder of the organ building industry in Victoria. The Sunday School is associated with the history of religious education and the socialisation of children in Victoria in the nineteenth and early twentieth centuries.

The Kyneton Arts Centre (Former Congregational Church and Sunday School) Kyneton is architecturally significant as an unusual Arts and Crafts design with decorative leadlight windows and timber window surrounds and mantelpieces with texts incorporated in the decoration to illustrate the purpose of the building.