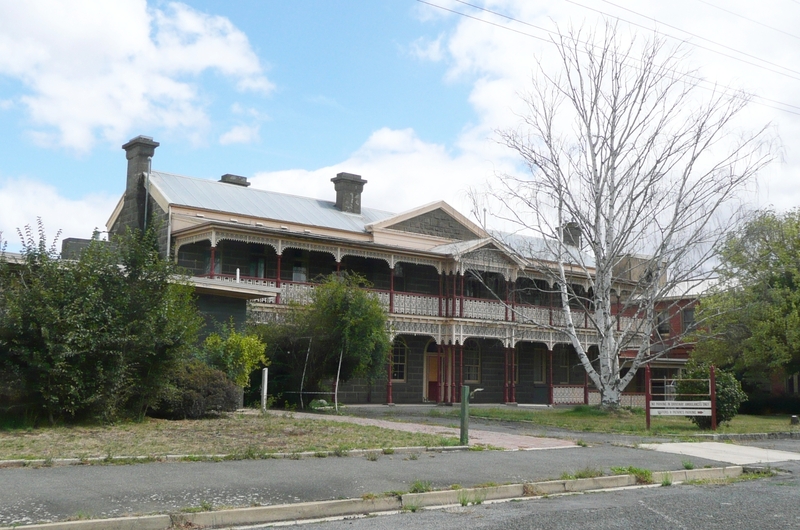 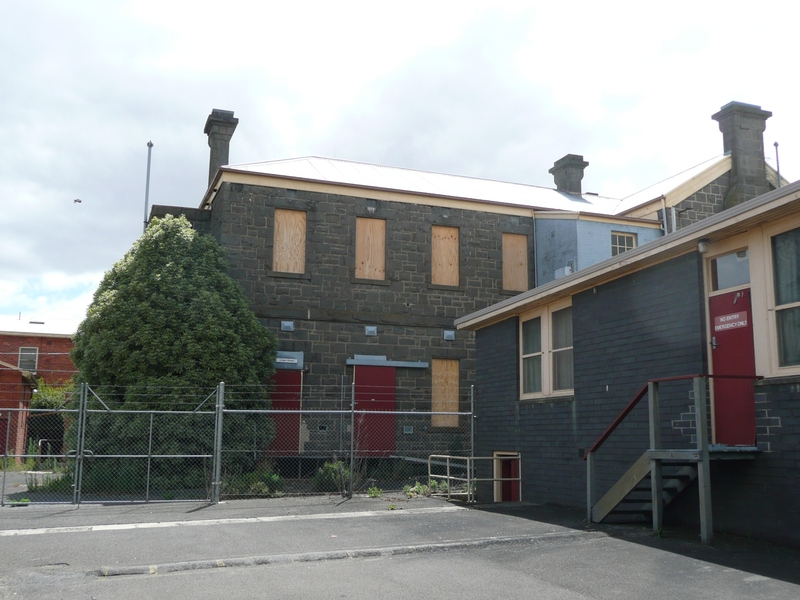 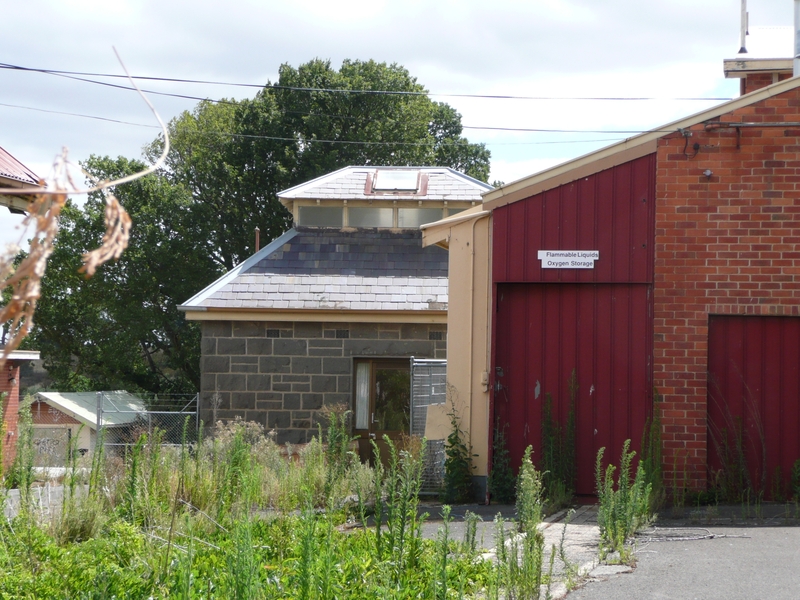 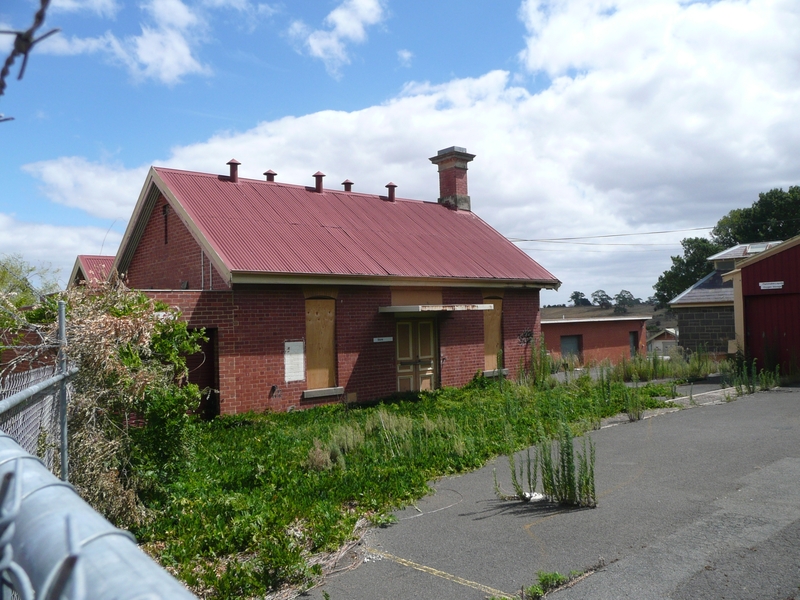 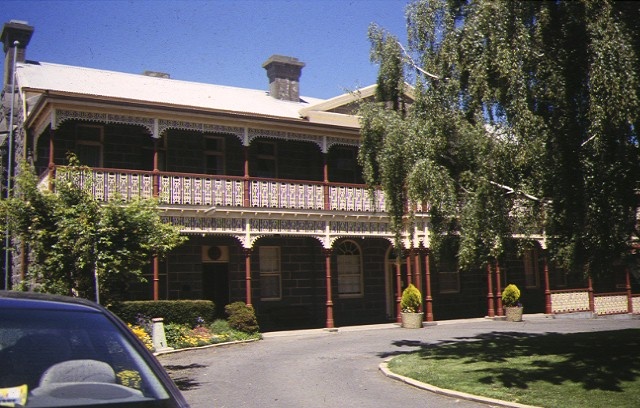 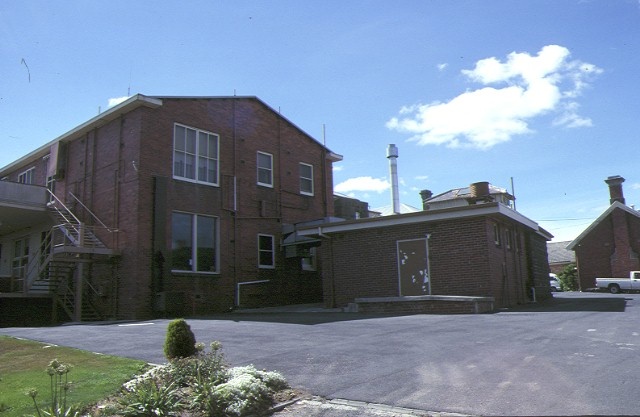 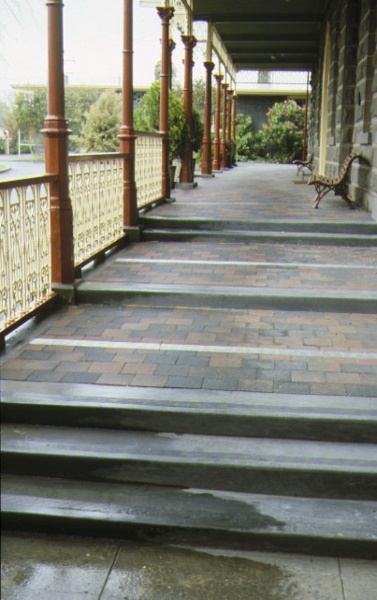 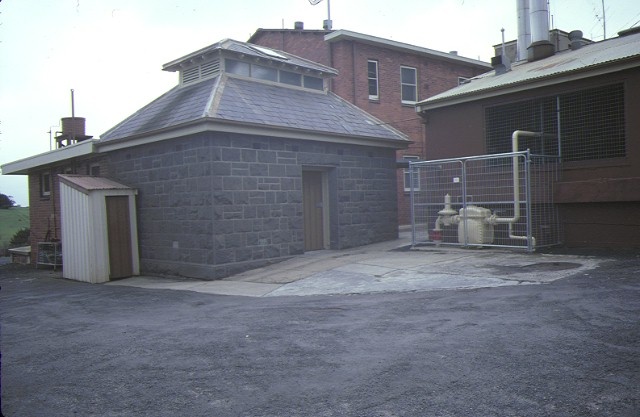 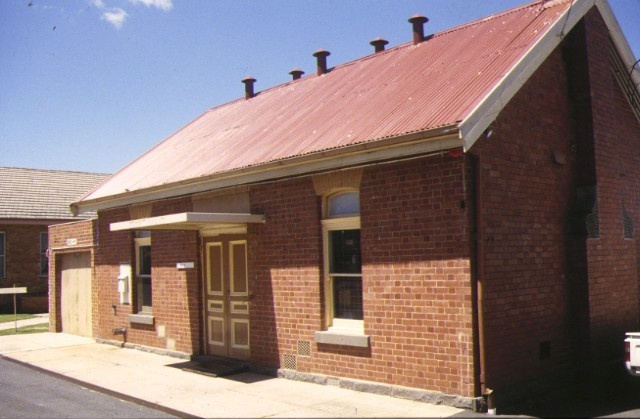 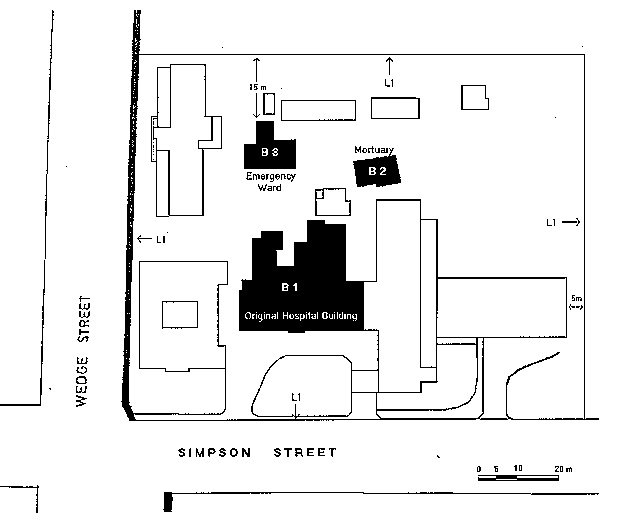 Kyneton District Hospital, Simpson Street, Kyneton, was erected in numerous stages, the two storey central bluestone wing being the first of these, erected from 1854 to 1856. Stonemasons Smith and Rogers constructed the building to the designs of architect Gabriel Fleck. Subsequent stages included an additional east wing and mortuary designed by the well known Kyneton architect William Douglas between 1859 and 1861 and further work by Gabriel Fleck in the extension of the west wing in 1864. An emergency ward was constructed separately on the site in 1894 to the designs of architect William Tonks who was also responsible for the addition of a cast iron verandah to the main building in 1910. Of bluestone construction the original building is symmetrical inform and Georgian in character with two flanking wings either side of a two storey central section. The central doorway is arched, with a semi-circular fanlight and arched windows on either side and there is a central pediment at the upper storey. The Georgian design is somewhat masked by the cast iron verandah added in 1910. The mortuary is of random range quarry faced bluestone construction and the emergency ward is of redbrick construction. From its early beginnings the hospital has remained the centre for health care in the Shire.

Kyneton District Hospital is of historical, social and architectural importance to the State of Victoria.

Kyneton District Hospital is historically and socially important for its association with Kyneton's boom activity of the 1850s when the town became a service centre to the surrounding goldmining activity. The hospital is one of the earliest of a group of Victorian country hospitals built between the early 1850s and mid 1860s. The only other country hospital in Victoria that pre-dates it is Port Fairy Hospital, which is less intact than the Kyneton example. The original building designed specifically as a hospital, performed that function for almost 90 years, fulfilling only ancillary needs after completion of the new main ward block in 1942. The different stages of the building's construction demonstrate the changing needs of the hospital and its development with the history of Kyneton.

Kyneton District Hospital is architecturally important as it demonstrates a range of architectural hands and styles, including Georgian, Gothic and Victorian. Of interest are the Gothic buttressed chimneys added by architect William Douglas contrasting with the Georgian style of the building and the Late Victorian cast-iron lace work added to the building in 1910. The stonemasonry demonstrates skilful craftsmanship with the quarry faced ashlar with drafted margins in the earliest wing of the hospital and random range quarry faced bluestone in the later sections. There were three notable architects involved in its construction Gabriel Fleck (1864 & 1854), William Douglas (1859-61) and William Tonks (1894 & 1910). The former emergency ward is architecturally important as it is relatively unaltered and demonstrates clearly the building/health regulations at the time it was built in 1894.