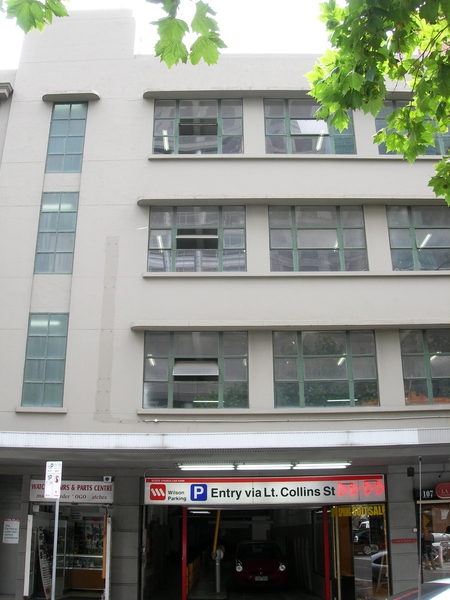 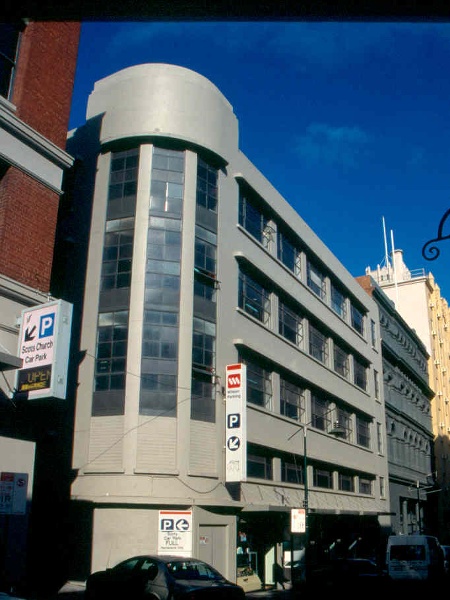 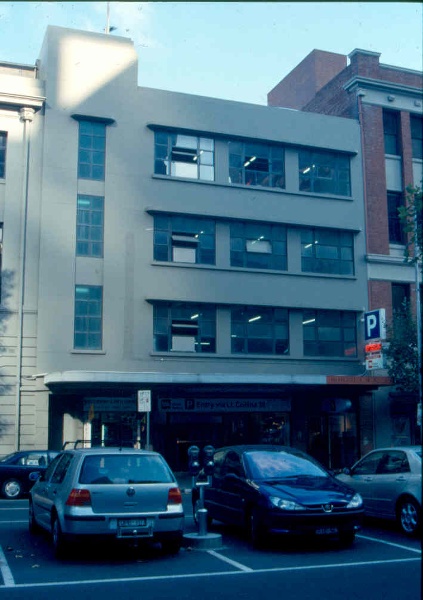 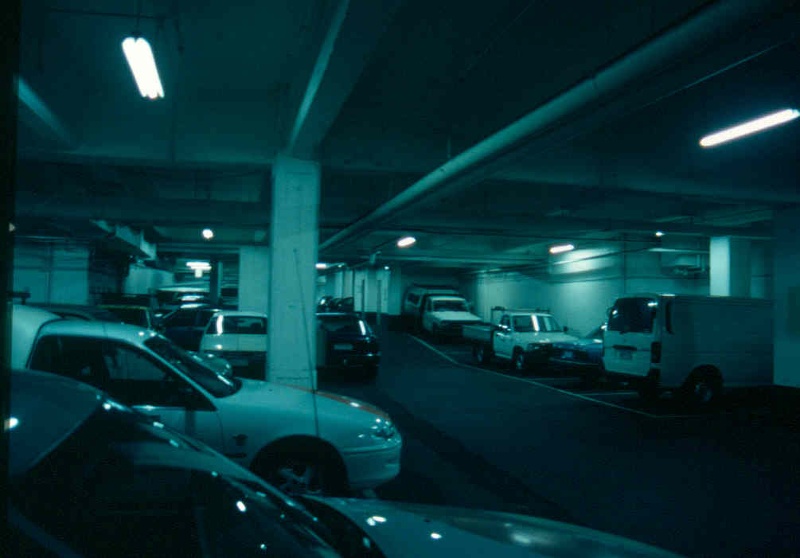 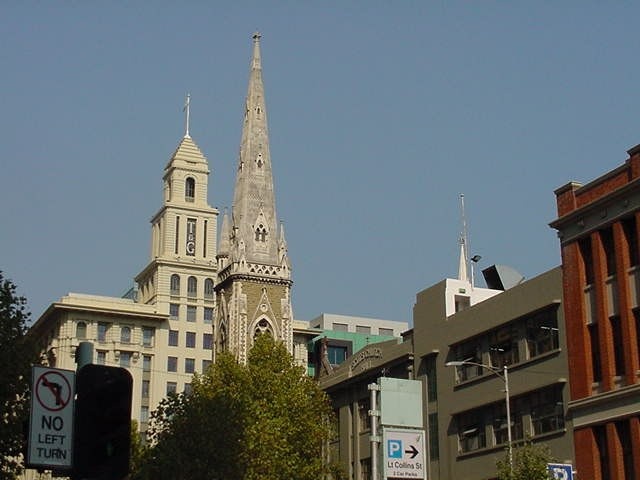 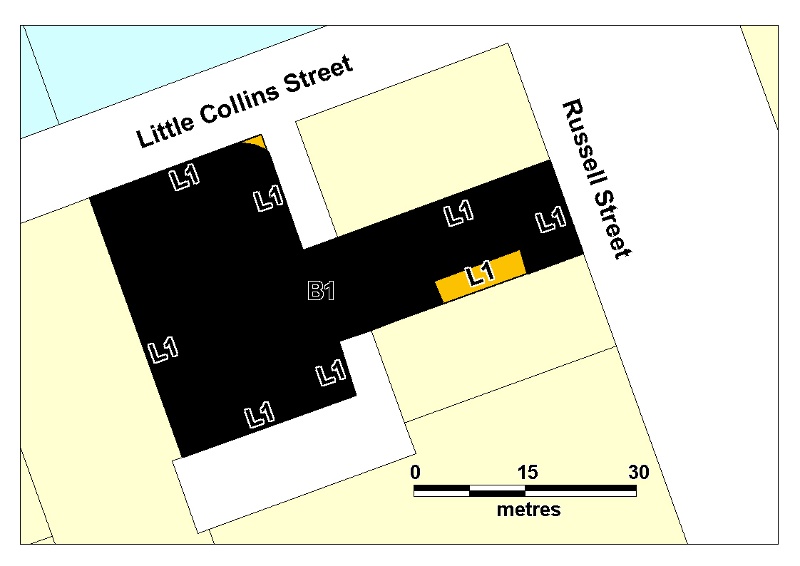 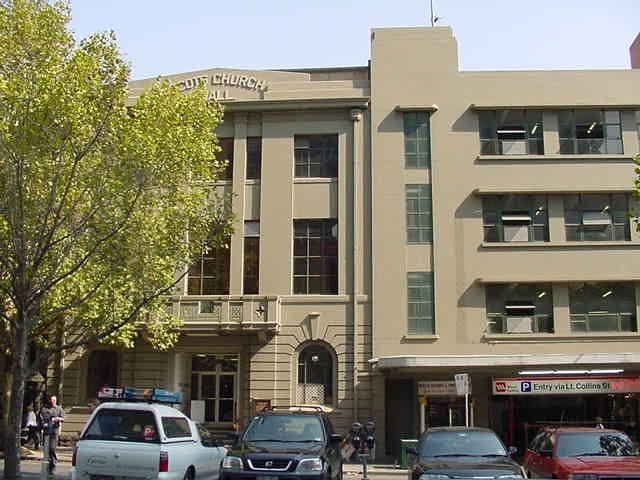 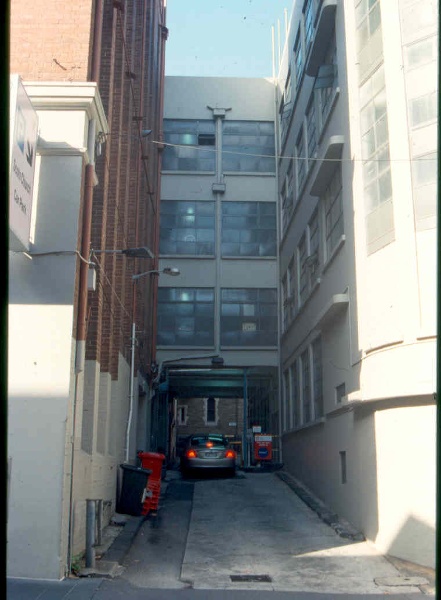 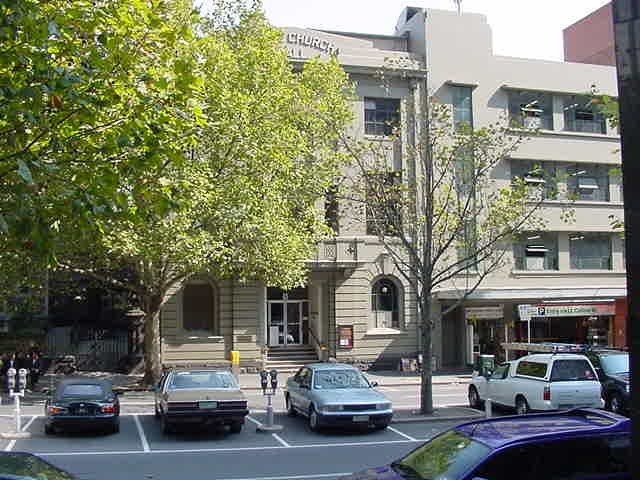 What is significant?
The Former Victoria Car Park was constructed in 1938 in reinforced concrete to a design by noted Melbourne architect Marcus Barlow for the Victoria Car Park Investments Ltd. Built in two distinct sections of four storeys, one facing Russell Street, the other facing Little Collins Street, the facades are in a restrained streamlined style, designed to look like an office or warehouse. The Russell Street facade has strip windows, contrasted with a vertical element, capped by a small square tower, and the car entry/exit at the ground level. The rear section, facing Little Collins Street, has horizontal windows, with a vertical curved corner element, includes long ramps with quarter-circle ends to access each floor. The painted off-form concrete interior includes space for 400 cars. On the ground floor there are two shops facing Russell Street and five facing Little Collins Street.

It was used as a car park until 1944. During World War II, the building was used by the Department of Labour and National Service and the Australian Women's Land Army and by a number of other government departments and agencies. Its conversion into office space for government presumably resulted from wartime demand for office accommodation and a reduced need for car parking in Melbourne because of petrol rationing.The building was later known as the State Government Annex, and included the architectural office for the Public Works Department, the Housing Commission and the Council of Adult Education. A car servicing and washing space remained on the ground floor, with car parking space in the basement used as the Public Works Department garage.The conversion of the building, which became known as the State Government Annex, for office space with a caretaker's flat, was designed by Percy Everett, Chief Architect of the Public Works Department in 1949.

When built, the car park was located in a small precinct very much given over to the motor car. The south-west corner of of Russell and Little Collins Street was occupied by Standard Motors, motor car agents. The south east corner was taken up by Preston Motors, and there were ground level parking allotments in Little Collins Street. The car sales industry was still predominantly a luxury trade and these businesses and the new car park were strategically located in the central business district close to the top end ofCollins Street. The place was therefore in one of the heartlands of wealthier Victorians who were more likely to be car owners and who frequented the quarter with its private clubs, theatres and cinemas, consulting rooms for leading medical specialists, exclusive shops and department stores, Town Hall and prominent churches. It was within easy reach of Bourke Street and Parliament House.

Its early demise as a car park may be attributed to several factors, including the possibility of design shortcomings and poor commercial judgement, but more particularly to the great reduction in car usage from early in the war, which failed to make the building profitable to its owners. The building was leased to the government and most of it was coverted into office accommodation (the ground floor and basement of the Little Collins Street remaining as a garage and car servicing areas).

How is it significant?
The Former Victoria Car Park is historically and architecturally significant to the State of Victoria.

Why is it significant?
The Former Victoria Car Park is historically significant in the history of motoring in Victoria as the first building purpose-designed as a multi-storey commercial car park in Melbourne, different in kind to previous garages and pre-dating the next multi-storey example by fifteen years. Its construction was a direct commercial or speculative response to an emerging need and opportunity for large scale parking facilities in the city area prior to World War II. Its construction marks a point that had been reached where motor car traffic had outgrown the capacity of the city to deal with it efficiently.It was for Melbourne a precursor of the post-war period when commerical provision of large volumes of off-street parking became essential to economic well being and growth of the Central Business District and the wider city area. At the same time, in its original conception and design, it demonstrated some clear differences between motoring before and after the war.

The architecture and fabric of the building, while undistinguished in the broader context, are of sufficient quality and intactness to demonstrate the historical significance. They were appropriate in scale and design to complement the quality of neighbouring buildings while the structure on Little Collins Street was able unambiguously to proclaim its purpose. The original design, which had some cubersome and impratical elements and was soon outmoded by developments in car park architecture, nevertheless seemed appropriate to the needs of the time and contained some ingenious solutions to a confined and irregular space.

In 2012 all but the Little Collins Street facade was demolished.