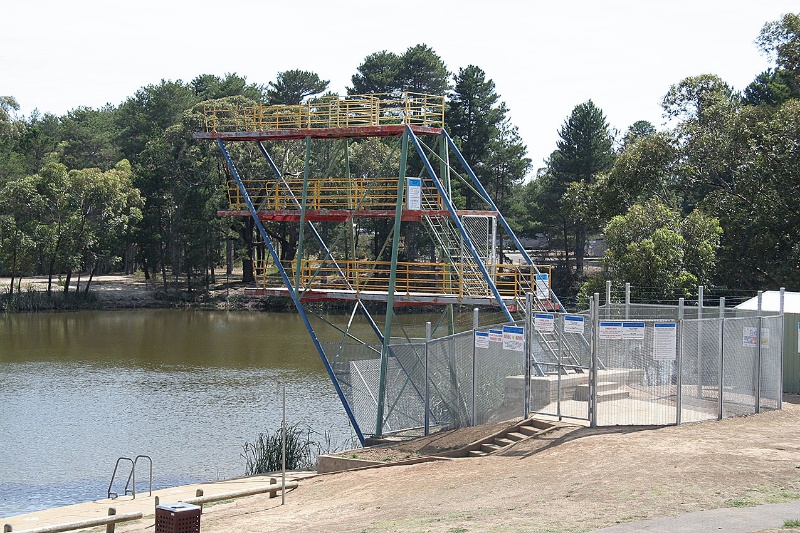 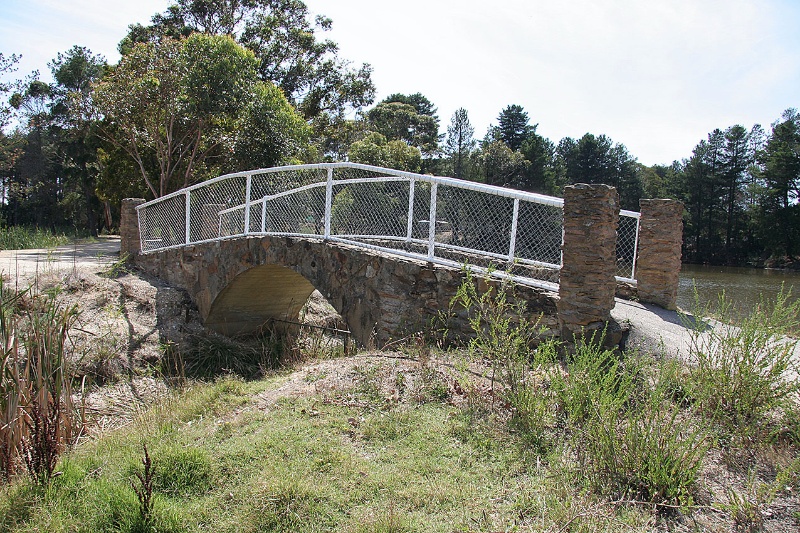 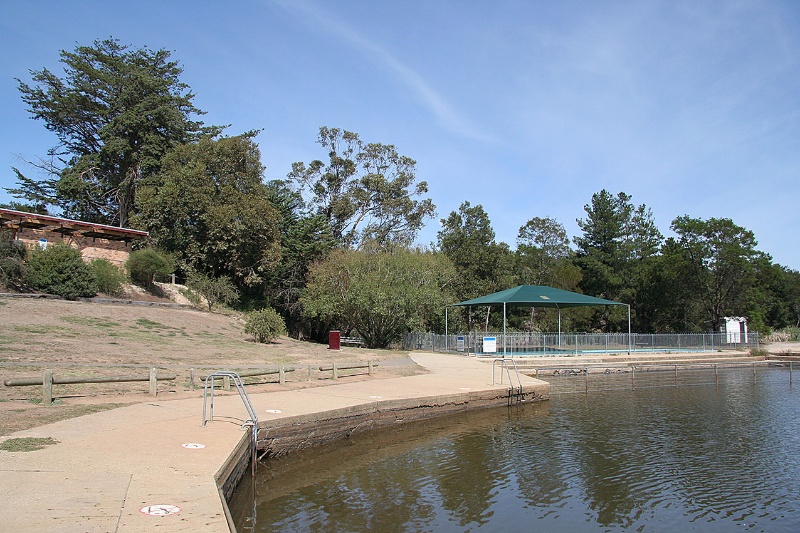 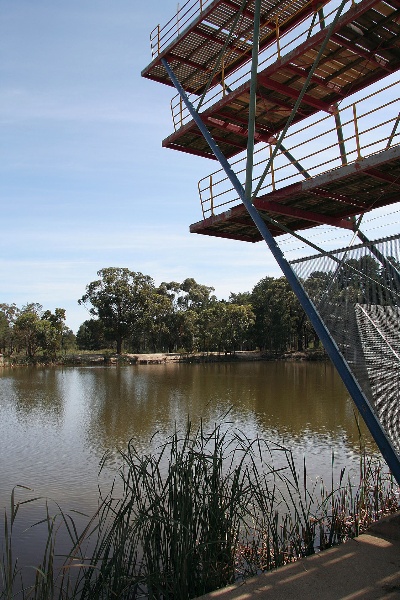 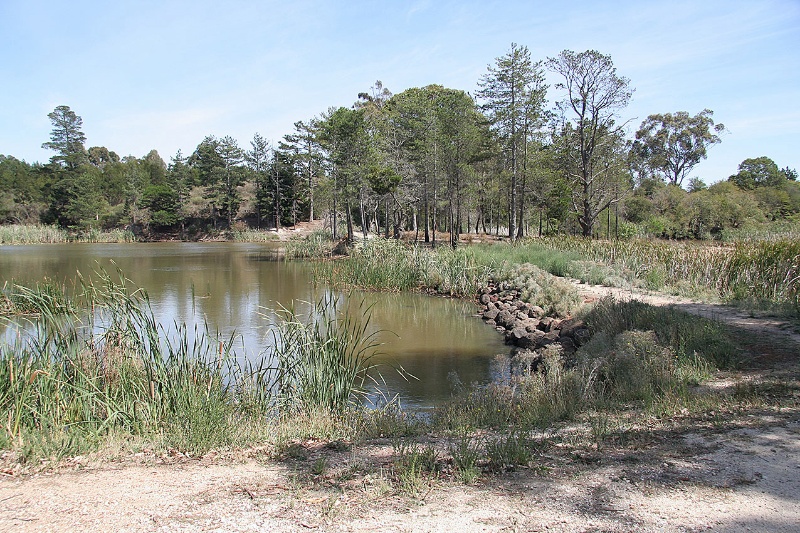 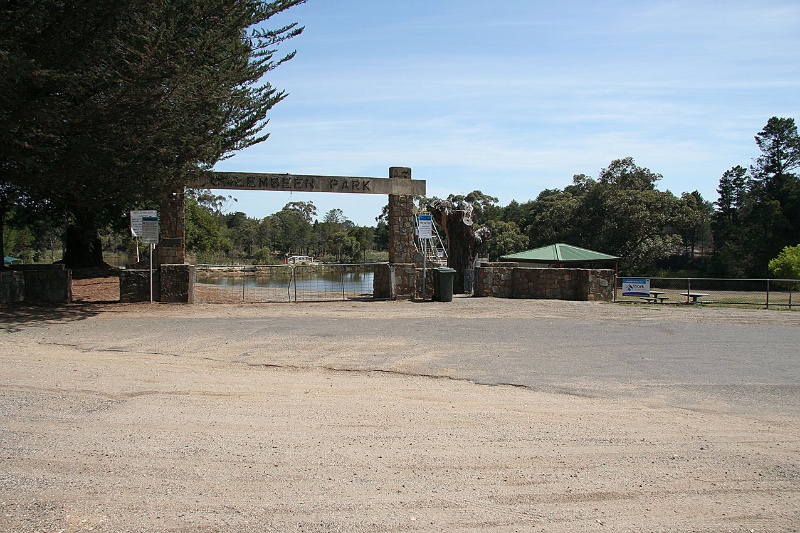 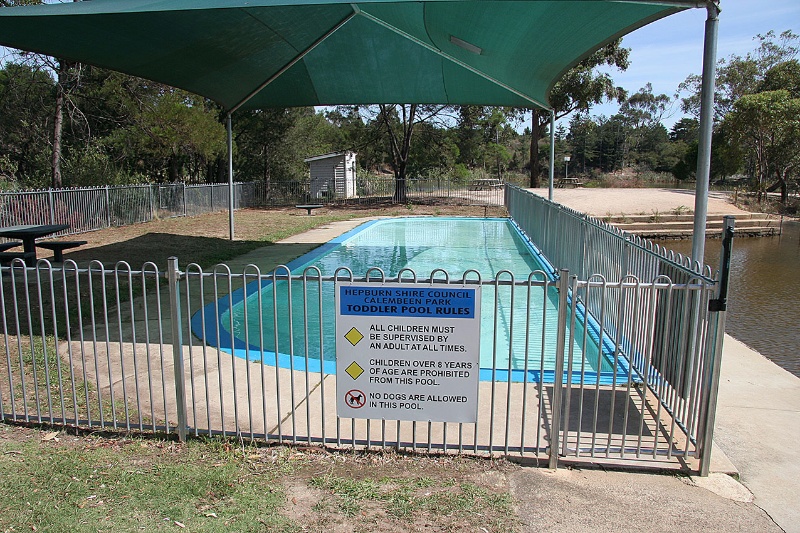 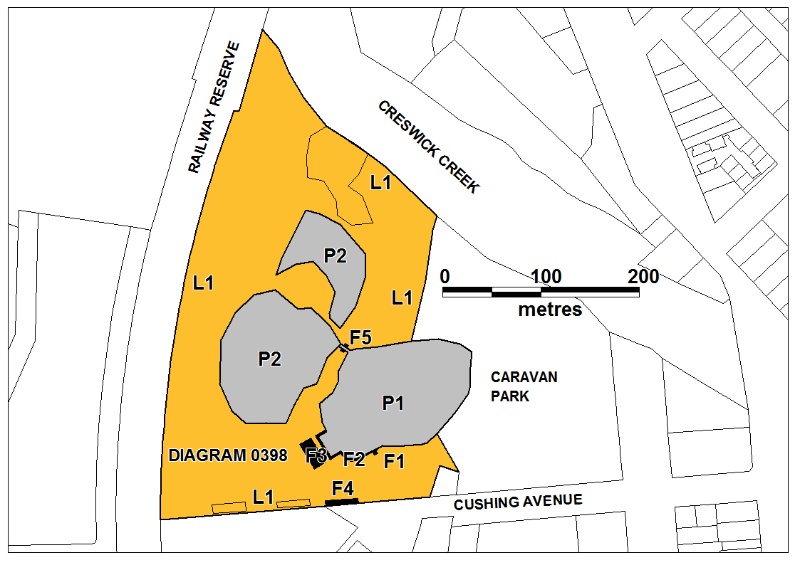 Calembeen Park is a recreation reserve of ten hectares on the western edge of Creswick. The reserve contains three ponds filling nineteen gold mining excavations. The park is approached on the south through a stone faced concrete gateway bordered on one side by a large California Redwood and a Cypress tree. A grassed slope containing picnic facilities forms an amphitheatre around the deepest and largest pond which is used for swimming. The south eastern edge of the pool is formed by a concrete platform, with a rectangular area marked of for a wading pool. A tubular steel framed diving tower with three diving platforms projects out over the pond. Above the wading pool is a toddler's pool with a separate water purification system. The shallower back pond to the north is stocked with fish for angling. An arched stone faced footbridge crosses a channel which links the two ponds. Another broad shallow pond is located at the north boundary. The north eastern part of the reserve contains a plantation of Corsican pine and Monterey pine from the 1910s and 1920s. A scattering of Southern Mahogany trees around the ponds probably date from the same period.

The park area and surrounds were mined for shallow alluvial gold between the early 1850s and the early 1860s. This area was worked over a number of times by Chinese miners, and it later became the site of a Chinese settlement which was occupied up until the late nineteenth century. In the late 1890s, the Black Lead Hydraulic Sluicing Company mined the black lead deposits which extend under the site, creating the large excavations which subsequently became ponds.

The first recorded use for swimming was around 1910, with an earth step cut in the bank for easier access and a wading pool bounded by a paling fence established in 1912. A temporary reserve for a public park was gazetted in 1916 - this included the area to the east now used as a caravan park. Primary schools began using the pool and 2,000 pines were planted. The local Progress Association set up a swimming club in 1926. A number of facilities were constructed over the next 25 years, including concrete dressing boxes, lockers, showers, a timber diving tower, two spring boards, rafts, kiosk, lighting and extensive seating. Annual carnivals were held, attracting national and international swimmers and large crowds . Frank Beaurepaire is said to have described Calembeen's pond in its heyday in the 1950s as "Victoria's finest inland swimming basin". The 'Junior' pool was separated off with a boardwalk which was also used to stage "Miss Creswick" competitions. A separate toddler's pool was added in 1940. The back ponds were stocked with native and introduced fish for angling. The entrance gates were built in 1952 and the existing steel diving tower replaced the original timber structure in 1960. A number of features, such as the concrete seating, dressing sheds and springboards have been removed. The park is still popular for swimming, angling and general recreational activities.

Calembeen Park Creswick is of historical and social significance to the State of Victoria.

Calembeen Park, Creswick is of historical significance as an intact and operational example of the group of pools which were developed as natural water features around the State. From the early to the mid-twentieth century swimming facilities on natural waters or remnant mining features were ubiquitous throughout Victoria. The pools varied from a majority of simple sites featuring a few basic facilities for diving and easy access to the water, to a small number which could cater for highly organised competitions with crowds of thousands. Calembeen Park represents these more developed sites which combined natural assets and facilities developed by the community to accommodate major carnivals and also acted as tourist attractions.

Calembeen Park, Creswick is of historical significance in the development of swimming as a sport in Victoria, and as a venue for major regional swimming carnivals in an era before artificial and 'Olympic' pools became commonplace.

Calembeen Park Creswick is of historical significance as an inland swimming hole and park which has been adapted from a landscape which was heavily altered by gold mining, and as the only such facility to make use of a remnant excavation from a hydraulic sluicing landscape, as distinct from a creek or river mined for gold.

Calembeen Park Creswick is of social significance as a community swimming venue which has been in continuous use since the early twentieth century and serving as an important component in the development of swimming as a sport in Victoria.