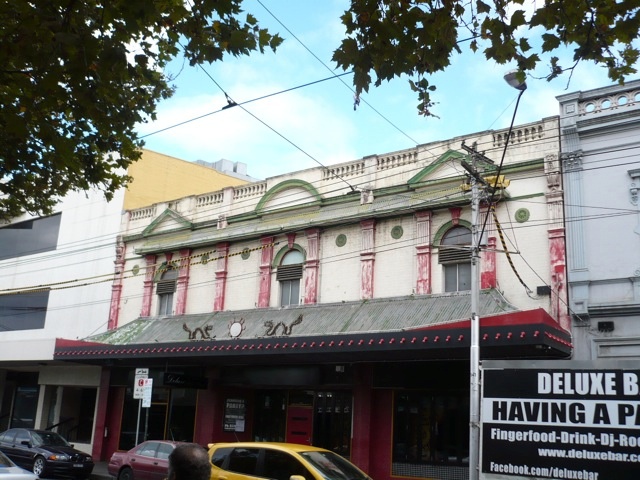 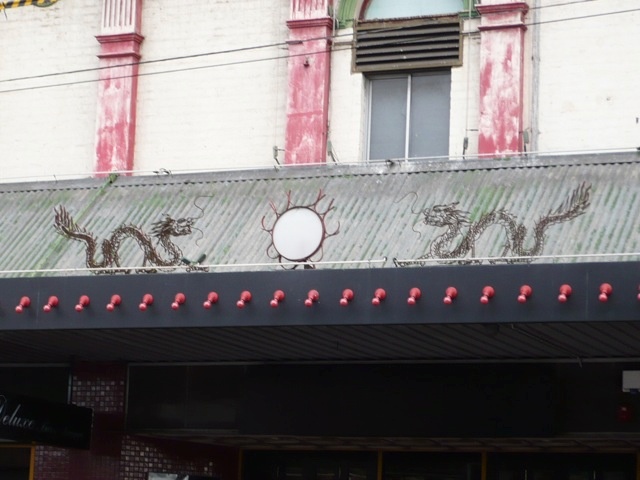 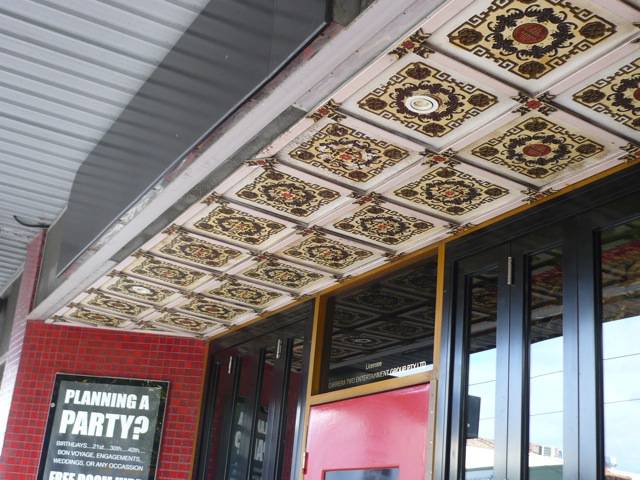 What is significant?
The building at 593-597 Mt Alexander Road, which was constructed c.1887 as three Victorian era shops and residences, and with later additions associated with the Chung On Cafe/Restaurant is significant. The upper facade has a Mannerist composition, which is divided into three bays by rendered brick pilasters. These pilasters, which incorporate decorative elements including masks and consoles, extend through the cornice to form the parapet. The parapet, which has pressed cement balusters, conceals the corrugated galvanised steel clad hipped roof of the building from view from Mount Alexander Road. Each bay of the upper portion of the facade contains a window. These windows have been unsympathetically altered. Flanking each window are moulded rendered pilasters that are similar to the others on the facade (but absent from these are masks and consoles, which may be extant but concealed behind the upper awning). Above the window at centre is a segmental pediment, and above the windows at each end are triangular pediments. A portion of the frieze, which is disproportionately deep, is visible at each end of the facade. Overlaid upon the original Victorian era decorative scheme are the alterations and additions for the Chung On Restaurant. This includes:

- A new steeply pitched awning with splayed corners. The fascia of the awning is lined in coloured lights and neon and remnants of the original neon signage including dragons flanking a circular motif sit astride the front above the entrance. There is a second, small awning, just below the original cornice.
- New shopfronts clad in red mosaic tile with large window openings. The wide, splayed, front entance is recessed and there are square tiles with Chinese motifs set into the undercroft above the entrance.
- Remnants of the restaurant colour scheme, which comprised red to the pilasters and green to the cornices and wall medallions.

Alterations and additions at the rear of the building, and any alterations made to the facade after the closure of the restaurant in 2007 are not significant.

How is it significant?
The former Chung On Restaurant is of local historic, social, and architectural significance to the City of Moonee Valley.

Why is it significant?
It is historically and architecturally significant as a typical example of a speculative commercial development associated with the land boom in Moonee Ponds. While Mt Alexander Road developed as a retail area prior to Puckle Street much of the early development has been lost and the significance of this place is enhanced by its rarity value as one of the few relatively intact nineteenth century shop rows to survive. (Criteria A & D)

The conversion to the Chung On Cafe/Restaurant is historically and socially significant as evidence of the influence of migration upon the post-war development of suburban Melbourne. Restaurants established by migrants, which offered an opportunity for social and economic advancement, profoundly changed public dining in Victoria and the Chung On Restaurant was one of the largest and most successful not only in Moonee Ponds, but also suburban Melbourne. While Chinese people have lived in the City of Moonee Valley since gold rush times there are few tangible places to illustrate this history and this building is a good and well-known example of a successful and long-standing business established by Chinese migrants, which is demonstrated by the distinctive additions made to the facade. It is also significant for its strong and continuing associations with the Doon family, in particular Dick and Danny who became prominent and influential members of the local and Chinese communities. (Criteria A, B, D & H)