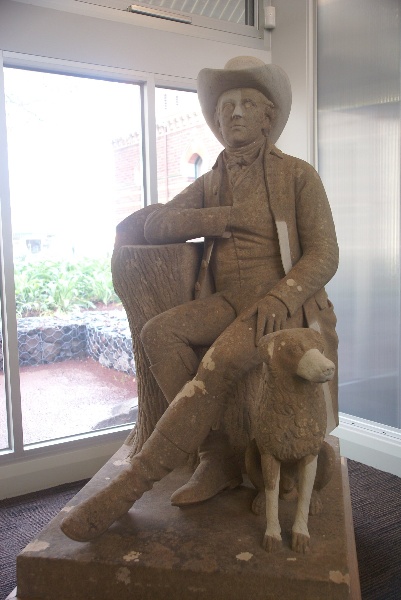 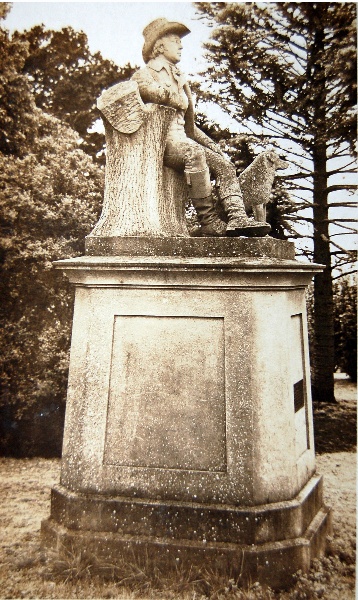 The life-size sandstone statue of the famous Scottish poet Robert Burns and his dog, titled Burns, carved by John Greenshields.

Robert Burns (1759-1796) was among the first of the Romantic poets, writing in both the dialect of lowland Scotland and in English, as then spoken by educated Scots. He incorporated the Scottish Enlightenment ideals of democracy, fairness, individual responsibility, and independence into his poems and songs. Burns received international recognition for the way he was able to weave his ideals, insights and political and social awareness into his poetry, which, with large-scale Scottish emigration, spread to the United States, Canada, Australia and New Zealand.

The statue of Robert Burns known as Burns was carved in Scotland in 1830, probably at Milton, on the Clyde River, Glasgow by John Greenshields (1792-1835). Greenshields based the work on a painting by Peter Taylor, a friend of Burns, which is documented as being from life and the earliest likeness made of Burns. The sculpture illustrates Burns' words: 'One night as I did Wander,/ When corn begins to shoot,/ I sat me down to ponder,/ Upon an auld tree root'. The statue was commissioned by William Taylor, a relative of Peter Taylor who had inherited the portrait in 1829. The statue was sent to Camperdown from London on 22 March 1883 by William Taylor's son William Andrew Taylor who lived at Renny Hill, Camperdown. In April 1883 he donated the sculpture for installation in the Camperdown Botanic Gardens, where it was placed on the ground. In December 1883 it was placed on a rectangular two-metre high rendered concrete pedestal. The Camperdown Chronicle reported on 22 December, 1883: 'The statue of the great Scotch poet, Robert Burns, now occupies a prominent position in the Park on the pedestal which has been erected under the supervision of Mr Hamilton, architect, of Colac. The statue is now seen to great advantage, and has a most imposing appearance'.

The 1830 statue of Robert Burns is life-size and carved from a block of buff-coloured sandstone with the appearance of Scottish Caen stone. Burns, wearing a countryman's hat, brim turned up at the sides, is shown seated on a forked tree stump, left hand resting on left thigh, and right elbow resting on the stump, with the right hand inside the waistcoat. Burns' dog Luath sits beside the left leg. The figures originally rested on a square pedestal constructed in 1883 and made of rendered 'rubble work cemented'. The render may have been coloured to imitate sandstone to match the sculpture. The statue was oriented so that the figure faced east towards the town. On the pedestal is a plaque made of gun metal (a type of bronze) with the words:

FROM AN ORIGINAL PAINTING BY HIS FRIEND,

PRESENTED TO THE PUBLIC PARK BY

The statue was vandalised a number of times, most recently and seriously in 2009. It underwent extensive repairs in 2011. The sculpture is now located on a low, turning base in the foyer of the Corangamite Shire Offices & Civic Centre, 181 Manifold Street, Camperdown. The detached fragments are in a showcase in the same foyer. The pedestal and plaque remain in the Camperdown Botanic Gardens.

The Robert Burns Statue satisfies the following criteria for inclusion in the Victorian Heritage Register:

Criterion A Importance to the course, or pattern of Victoria's cultural history

The Robert Burns Statue is significant at the State level for the following reasons:

The statue of Robert Burns is significant for its representation of the cultural influences of Scottish migration to Australia, and to Victoria in particular. The work demonstrates early nineteenth century Scottish artistic and cultural achievement and symbolises the ongoing sense of identity felt so strongly among the Scottish diaspora across the world. The statue is one of the oldest statues of Robert Burns in the world. (Criterion A)

The statue of Robert Burns is an extremely rare, and probably unique, example in Victoria of a sandstone statue carved in the 1830s, before the foundation of the Port Philip District in 1835. Other early outdoor sculptures in Victoria were made of either bronze or marble and date from the 1860s or later. (Criterion B)

The statue of Robert Burns is significant for aesthetic reasons because of the high level of skill demonstrated by the way the sculptor, John Greenshields, resolved the complex pose of the figure and dog. He displays masterly technique in details such as the realistic appearance of the boots, creases in the clothing, the suggestion of the notebook crammed into Burns' coat pocket, the shape of the hand under the jacket and the way the coat is caught up at the back. There is clear differentiation between the textures of the moleskin, leather, textiles, bark of the tree and the dog's fur. The sculpture also illustrates the pre-photography practice of creating sculptures based on paintings. (Criterion E)

The Robert Burns Statue is also significant for the following reasons, but not at the State level:

The donation of the Burns statue to the new Public Park in the small township of Camperdown is an example of the aspiration of citizens in the nineteenth century to beautify and decorate public parks with sculpture. The inclusion of a high quality statue in the botanic gardens would have increased the township's civic pride and added to the site's reputation as a beauty spot overlooking the nearby twin crater lakes. (Criterion A)