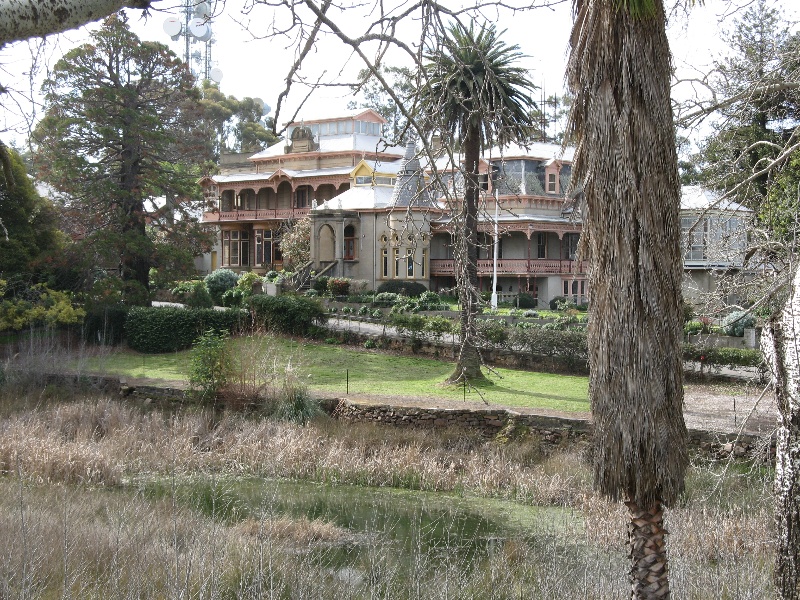 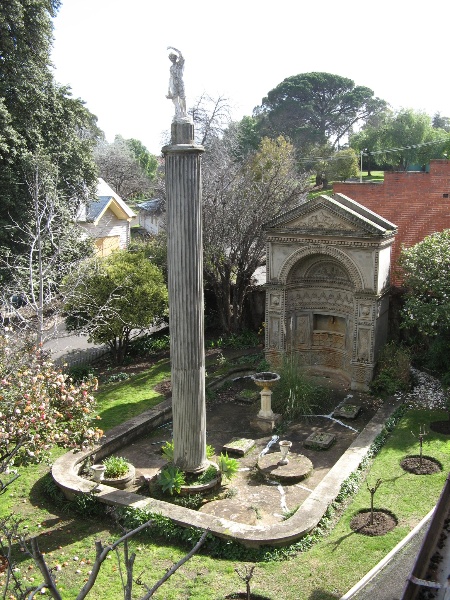 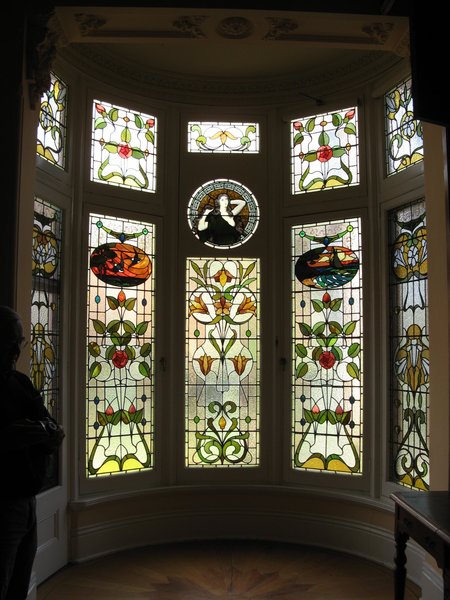 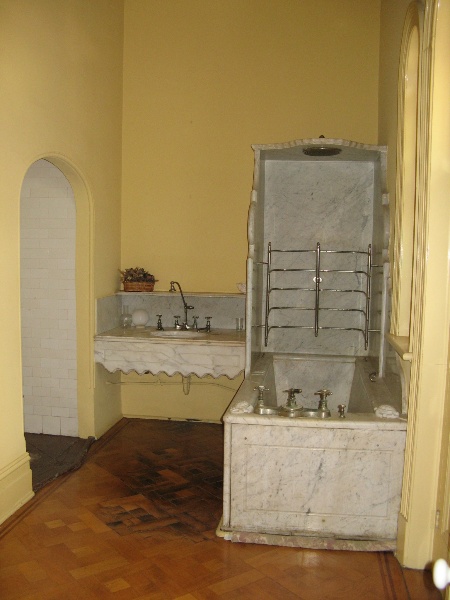 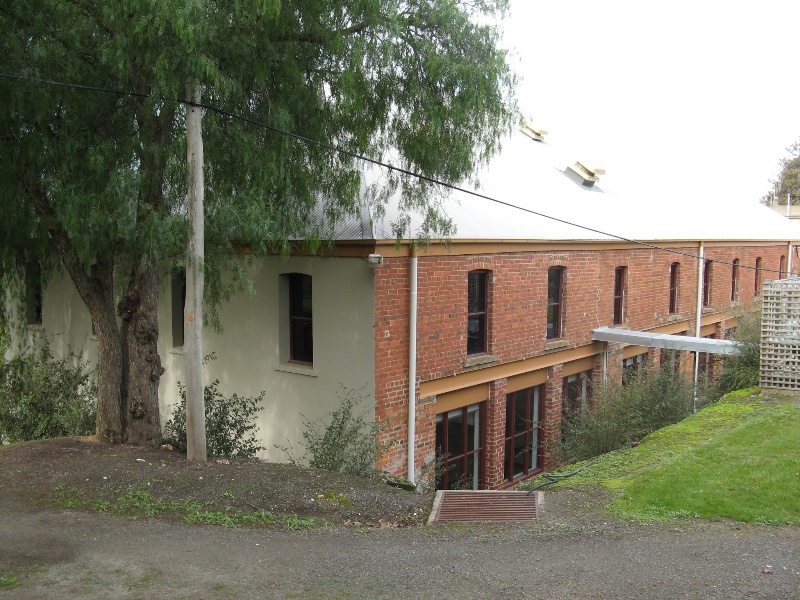 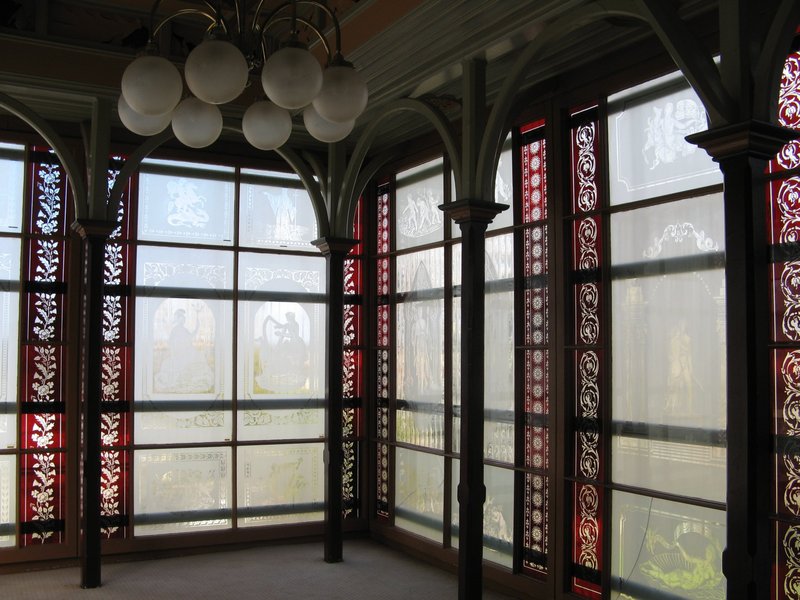 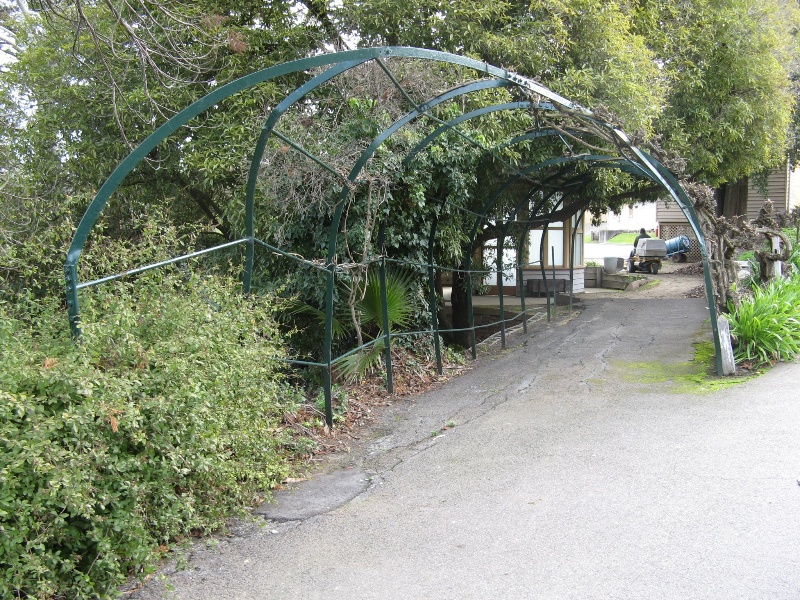 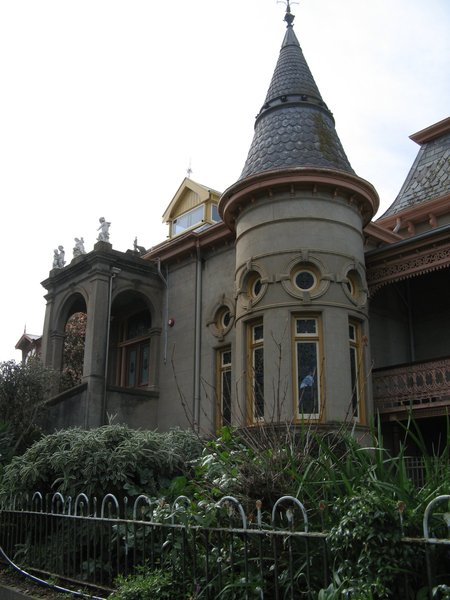 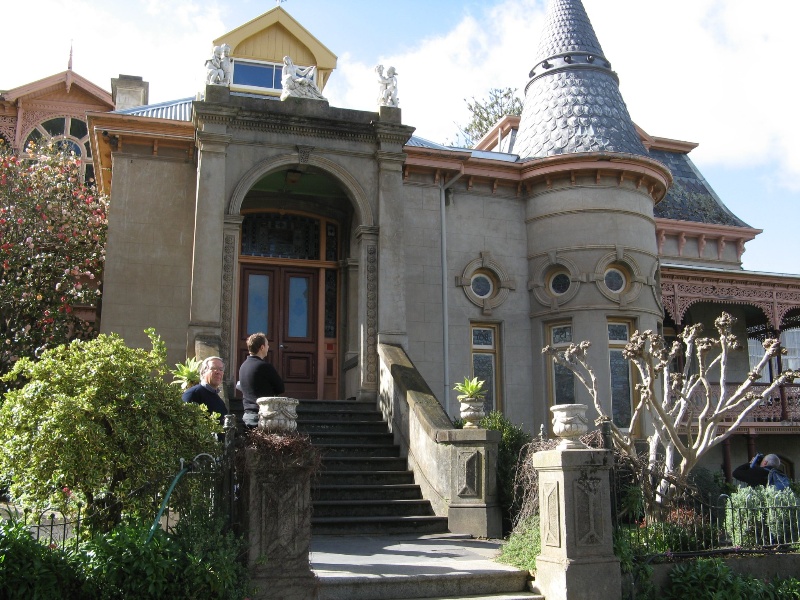 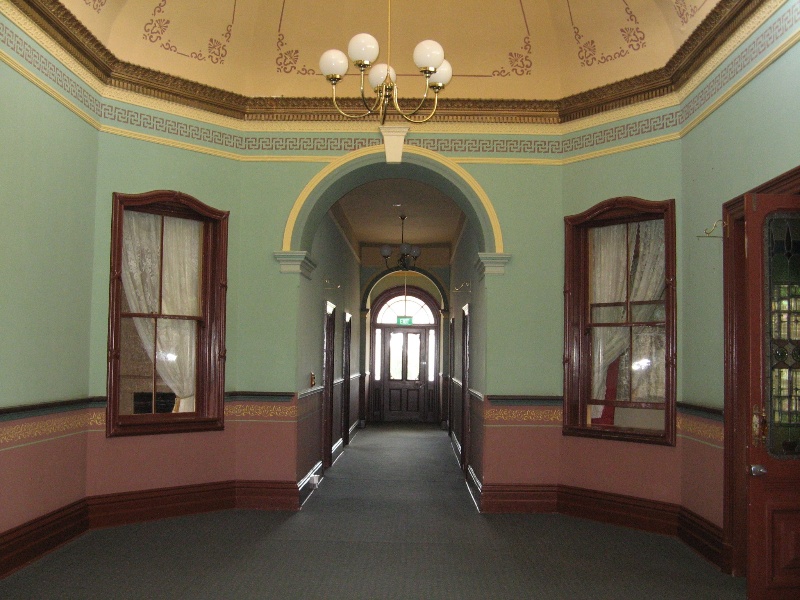 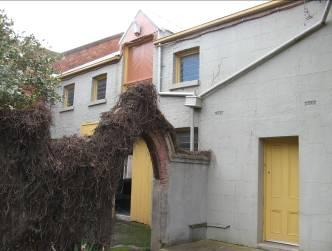 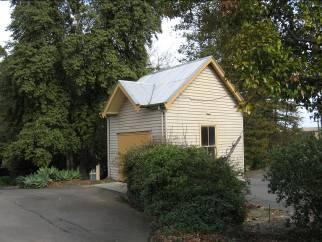 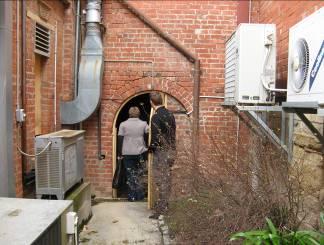 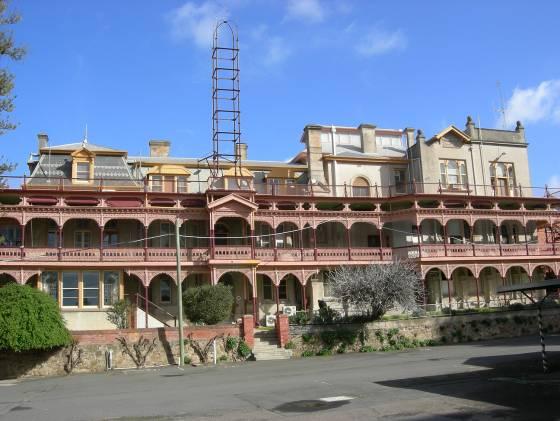 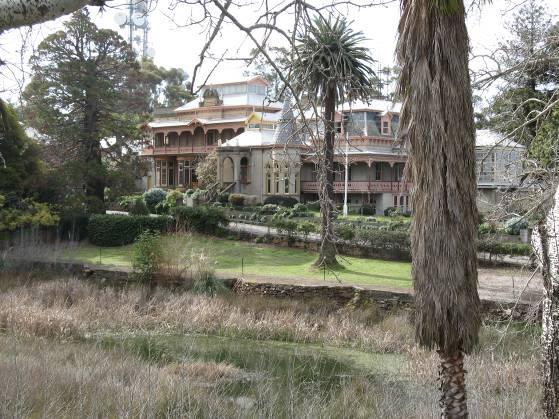 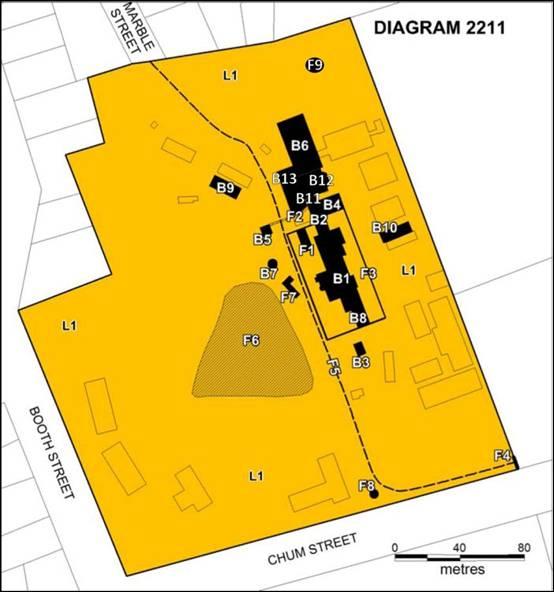 Fortuna is a picturesque nineteenth century villa and garden developed from 1857 by two of Australia's wealthiest gold magnates, Christopher Ballerstedt from 1854 and George Lansell after 1871. It was developed on the treatment site for ore from nearby gold mines. It comprises the villa, lake and garden at the centre of the site, with the former gold processing buildings to its north, and army structures which were added around the periphery of the site after 1942.

The Bendigo goldfields were discovered in 1851, and the surface gold was soon traced to gold-bearing quartz reefs, which proved to be the deepest and richest in the world. The German immigrant Christopher Ballerstedt and his son Theodore were among the earliest successful reef miners on the Bendigo diggings. In 1854 they bought for £60 a mining claim on Victoria (or Chum) Hill (VHR H1355) to the north of Fortuna, and obtained from it gold worth nearly £200,000. Christopher bought the Fortuna site in 1857 and by 1858 had built a quartz-crushing mill on the site, as well as a modest two-storey brick house, which he extended in 1869 to designs by the Bendigo architects Vahland & Getzschmann. Christopher Ballerstedt died in 1869 and in 1871 his son Theodor sold Fortuna and the mine on Victoria Hill to George Lansell for £30,000 and returned to Germany.

Lansell (1823-1906) had migrated from Kent in 1853, and from 1855 invested in quartz mining companies. His confidence in deep mining began to yield returns in the 1860s, and after acquiring Ballerstedt's mine he sank it even deeper, soon finding £180,000 worth of gold, which became the basis of his enormous wealth. He became a millionaire and was known as 'Australia's Quartz King'. He was to have interests in almost every mine in Bendigo and was famous for his tireless efforts to maintain the town's mining industry. He transformed the Fortuna site, with the villa continually altered and extended to successive plans by various prominent Bendigo architects: Vahland & Getzschmann, Emil Mauermann and William Beebe. By the early twentieth century the house had become a mansion of over forty rooms, one of the largest in Victoria, lavishly decorated and furnished with pieces collected from around the world. He transformed the industrial landscape of settling ponds and tailings dumps into spacious gardens with ornamental lakes, extravagant fountains and follies, pathways and exotic plantings.

On Lansell's death the management of his mining interests was taken over by his son, and his widow Edith continued to live at and develop Fortuna until her death in 1934, when the house and its contents were sold. The house was used for a short time as a reception centre until acquired in 1942 by the Commonwealth as the headquarters of the Australian Survey Corps, accommodating the army's cartographic and printing activities during World War II. From then until 1996 it was occupied by the Army Survey Regiment, which became a world leader in developing technologies for use in automated mapping systems, and from 2000-2008 by the Defence Imagery and Geospatial Organisation (DIGO). The Army made several significant changes to the grounds, including the construction of buildings for accommodation, messing and office space, the earliest of which are two c1940s P1 type huts, a building type developed by the military for temporary accommodation during World War II.

Fortuna is located on an elevated irregularly-shaped 6.74 ha site overlooking Bendigo. It is located on the New Chum Reef, where during Lansell's occupation there were several active shafts (though none on the present Fortuna property). The property is entered from Chum Street through wrought iron gates (1900) supported by granite pillars (c1880s) linked by a decorative iron archway bearing the Army Survey Corps crest. The driveway leads past an Army Survey memorial cairn (1996) to the villa, which is surrounded by a garden wall (1860s) which once separated it from the surrounding mining activity. The villa (1858-1907) is a rambling three-storey asymmetrical rendered brick mansion, in a variety of styles, predominantly French Second Empire and Queen Anne, reflecting the various periods of construction. Cast iron balconies (c1900) decorate the north, east and west elevations. Ballerstedt's original modest house is retained, though much altered, in the centre of the present house. The house has no original furnishings, but it is notable for its magnificent collection of leadlight and etched glass windows, including many incorporating Defence Department motifs, its plaster and pressed metal ceilings, parquet floors, its two unique bathrooms (1904), and its outstanding conservatory (c1880) with 'French antique' ruby glass imported from Italy and floor to ceiling windows of etched glass depicting mining scenes, Australiana and heraldic symbols. Adjacent to the house is the 'Pompeii Fountain' (c1879), a copy of the one in the House of the Great Fountain in Pompeii which was inspired by Lansell's trip to Italy in 1875, and a fountain and rockery in the south garden. The so-called 'Roman bath' is believed to have been an 1860s tailings treatment pool converted into a brick-walled swimming pool by Lansell (1870s-1880s) and roofed over by the Army. Other early structures associated with the house are a brick laundry (c1904 or 1907) and a former shade house (c1907) south of the house, a stable (1860s) and coach house (1880s) north of the house, and a c1904 garage north-west of the house, used for Lansell's Benz motor car, the first in Bendigo.

The only surviving mining structure is the former quartz-crushing battery (1874, extended 1899), used by the Army as a printing facility. A brick-lined tunnel north of the house may have been associated with the secure loading of bullion onto armed coaches, and may date from the Ballerstedt era. The period of defence occupation is reflected in a number of utilitarian structures, among the earliest of which are two 1940s P1 type huts, which are corrugated steel-clad buildings with low-pitched gable roofs. Archaeological evidence of the historical use and development of the site, including early gold processing activity and residential use, may still remain.

Fortuna satisfies the following criterion for inclusion in the Victorian Heritage Register:

Fortuna is significant at the State level for the following reasons:

Fortuna demonstrates key historic phases of Victoria's history, notably the gold mining era, the development of the City of Bendigo and the history of defence in the state. The Fortuna cultural landscape is associated with the gold mining industry of Bendigo, particularly the extraction of gold from the richest quartz reef in the world in the nineteenth century, which had a significant influence on the settlement of Bendigo. (Criterion A)

Fortuna is an outstanding demonstration of the wealth and prosperity of Bendigo and Victoria during the gold rush period. The quartz-crushing works attached to the mansion represent a direct link between its owners' wealth and its source. Fortuna is historically significant as the home of two of Australia's wealthiest gold-mining families, Christopher and Theodore Ballerstedt, the earliest successful reef miners on the Bendigo goldfields. These men are often referred to as Australia's first mining magnates, and George Lansell, known as the 'Quartz King', one of Australia's most successful and adventurous nineteenth century mine owners. Although there were no mines on the Fortuna site, the estate was developed largely on the waste from Lansell's 180 mine, north of Fortuna, which was one of the richest mines in Bendigo. The ore treatment site was gradually transformed into a picturesque landscape of lakes and gardens. Fortuna demonstrates the lavish lifestyle of the very wealthy families of Victoria's gold-rush period. (Criterion A)

Fortuna is an example of the large private properties appropriated by the military during World War II, and has been in Defence control since 1942, when it was acquired as a base for mapping activities. It was the headquarters of the Survey Corps, later the Army Survey Regiment, until 1966 when it became the Defence Imagery and Geospatial Organisation (DIGO). The work of the regiment was highly important for the war effort, as preparing maps was a matter of urgency. New techniques based on American methods were developed at Fortuna, including innovations in aerial photographic surveys, and cartographic and lithographic techniques. (Criterion A)

Fortuna has a number of features which are rare in Victoria. It was rare for such a lavish house to be built so close to the industrial works that were source of the wealth that created it, in this case the crushing works for the ore from the Ballerstedt and later the Lansell gold mines. This reflects the need for security to protect the gold produced on the site. The survival of a nineteenth century villa estate, with a grand house surrounded by its original garden, is also unusual in an urban setting, and many of Fortuna's garden structures, such as the iron fountain, rotunda and iron arbour are now relatively rare. Other rare features at Fortuna include the Pompeii fountain and the Roman bath, whose significance is increased by its origin as a tailings treatment pool built by the Ballerstedts in the 1860s. (Criterion B)

The area in the direct vicinity of the house has the potential to contain historical archaeological features, deposits and objects associated with the construction and use of the place, including sub-floor deposits, refuse and garden or landscape features. (Criterion C)

Fortuna is aesthetically significant for its decorative architecture, its remaining interiors and for its landscape setting and garden buildings and structures. The picturesque landscape extensively planted with trees, shrubs, garden beds and lawns is located on high ground that retains an undulating and modified land form of a former mining site with terracing, walls, steps, fences and gates, roads and paths and a lake, being a former settling pond. The contrasting and extensive plantings consisting of conifers, evergreen and deciduous trees, palms, shrubs, herbaceous plants, camellias and roses form a garden of aesthetic significance. Fortuna's gardens, at their peak, were a marvel of aesthetic design, and many significant plantings remain. (Criterion E)

Fortuna is inextricably linked with George Lansell, the 'Quartz King', Australia's first gold mining millionaire, who is credited with being the driving force behind much of Bendigo's early prosperity. Lansell made a significant contribution to the mining industry in Bendigo and is credited with the introduction of technologies such as the diamond drill for quartz mining. Fortuna Villa and its grounds were Lansell's passions and he decorated them extravagantly. (Criterion H)

Fortuna is also significant for the following reasons, but not at the State level:

Fortuna is of historical significance at a local level for its association with the history of Bendigo.

Fortuna is a historic landmark in Bendigo. It symbolises the founding of the town, and is important as a reference point in the community's sense of identity. Many of the town's citizens have worked on the site and several active community-based social groups have been formed to actively promote the history and importance of the site. The community, through the City of Greater Bendigo, has shown a profound interest in the future of the site.

Fortuna is significant for its association with one of Australia's wealthiest gold magnates, Christopher Ballerstedt, who played an important role in the development of Bendigo's gold mining industry. It is a demonstration of the work of the prominent Bendigo architects, Vahland & Getschmann, E Maurmann and W Beebe.