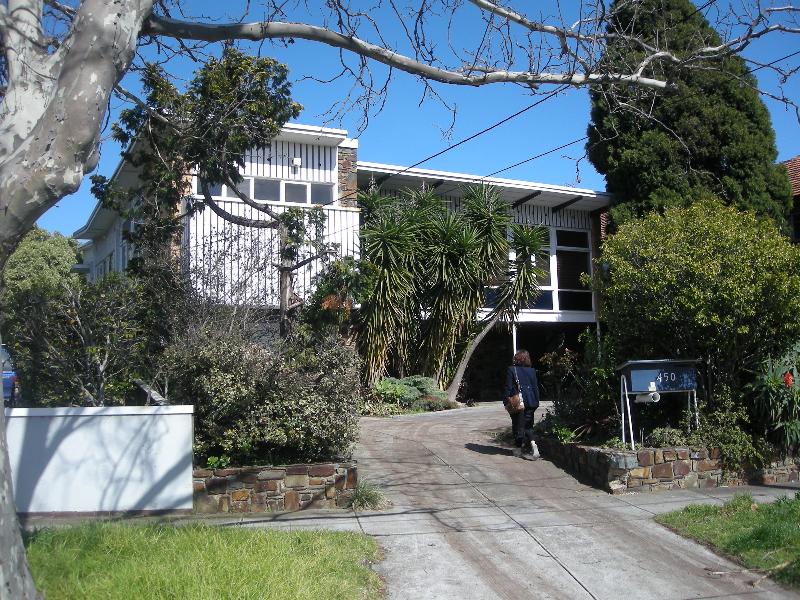 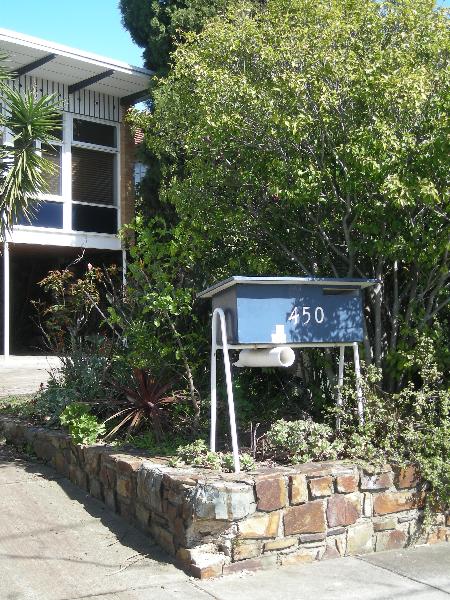 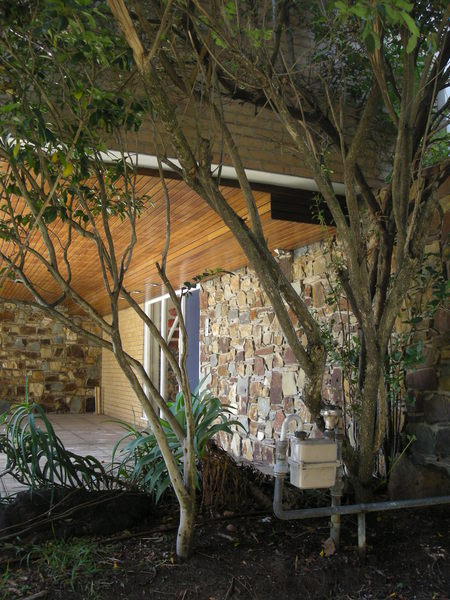 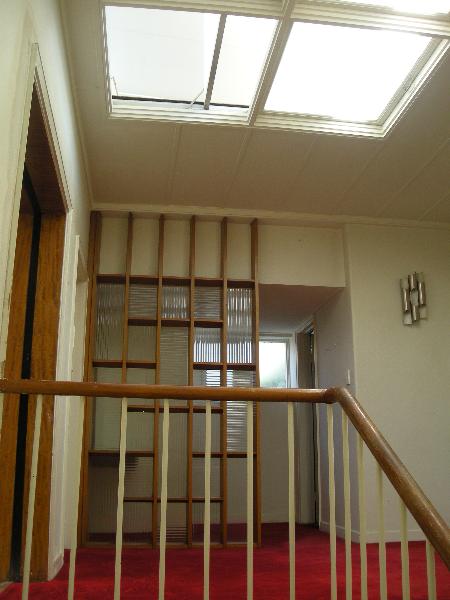 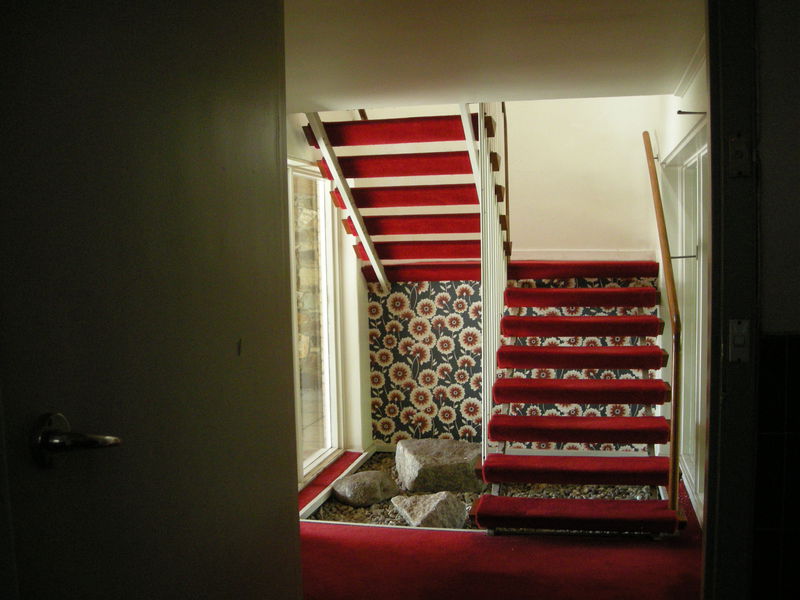 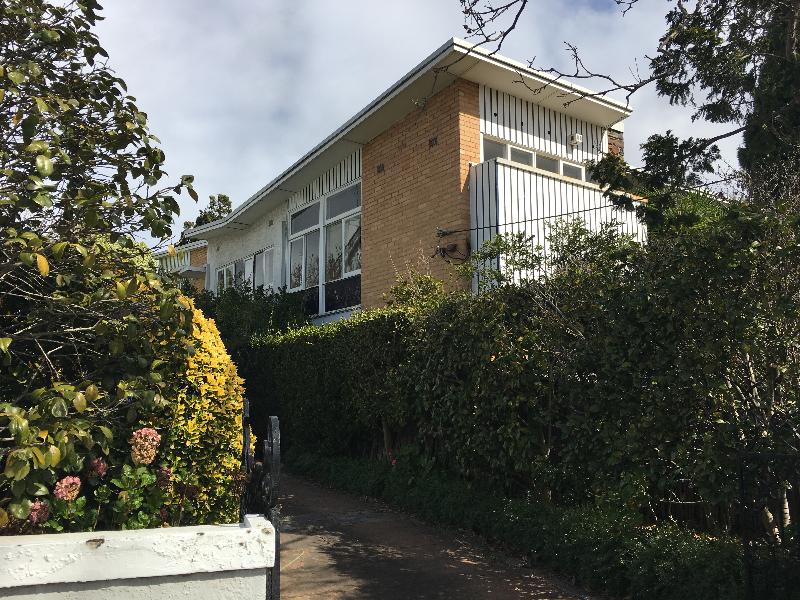 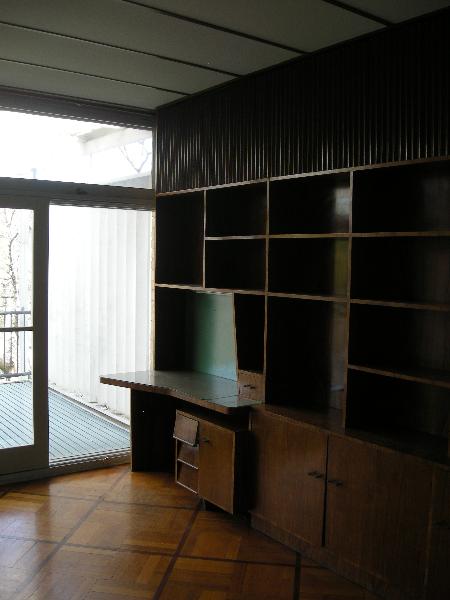 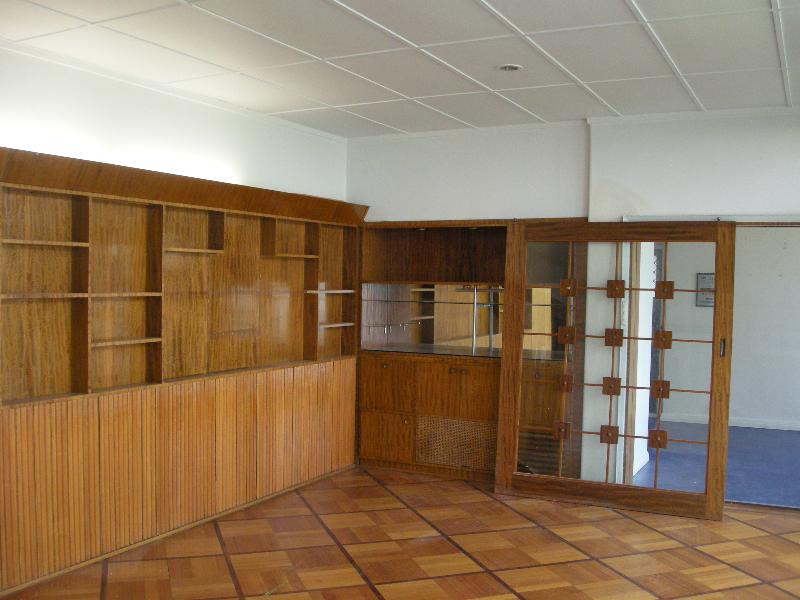 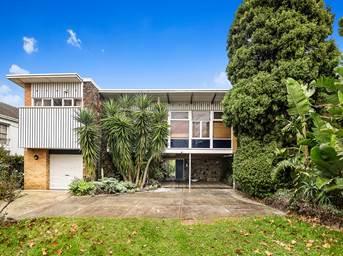 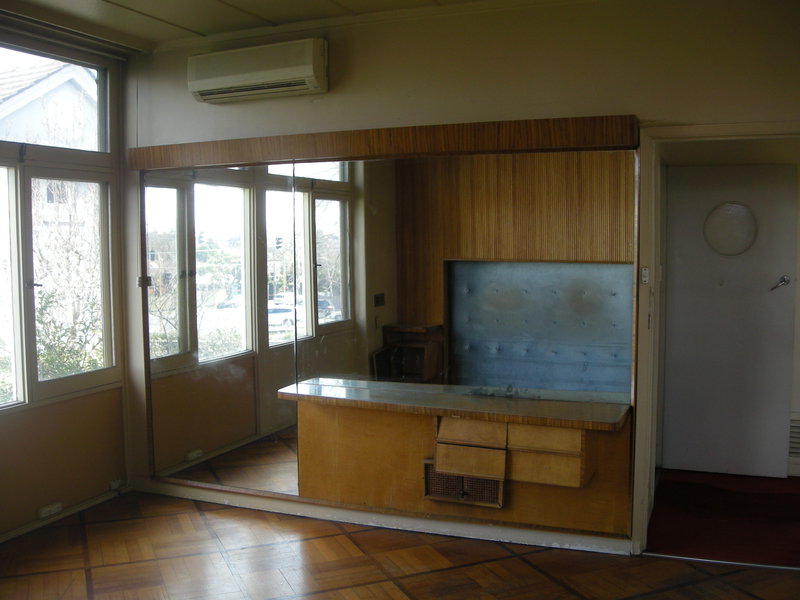 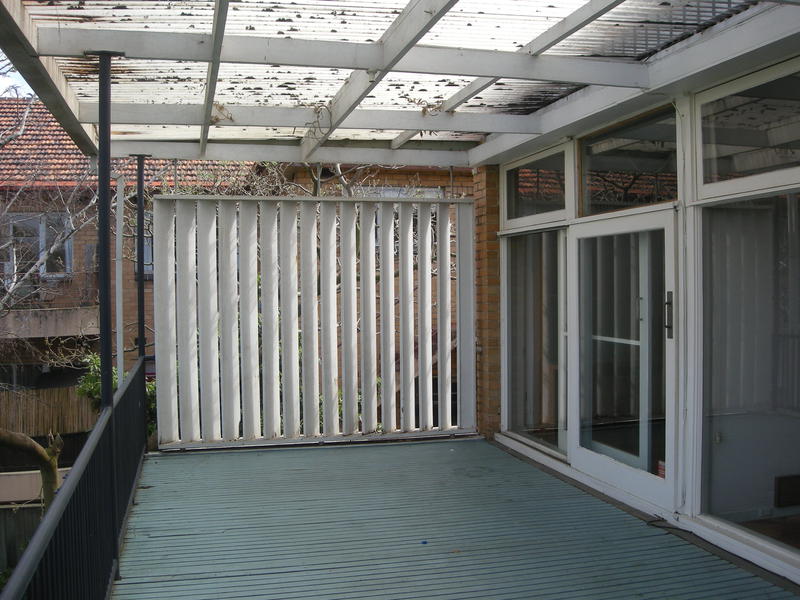 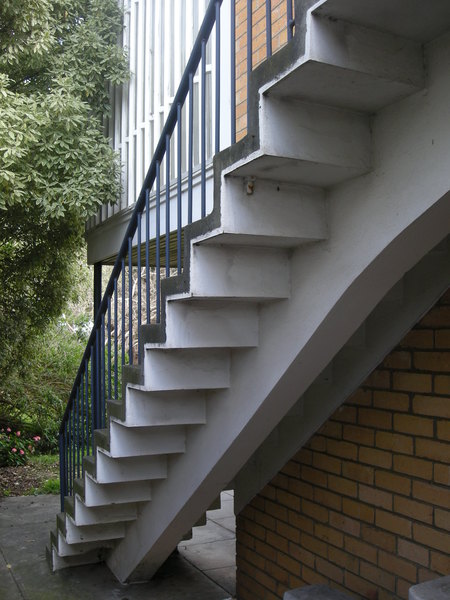 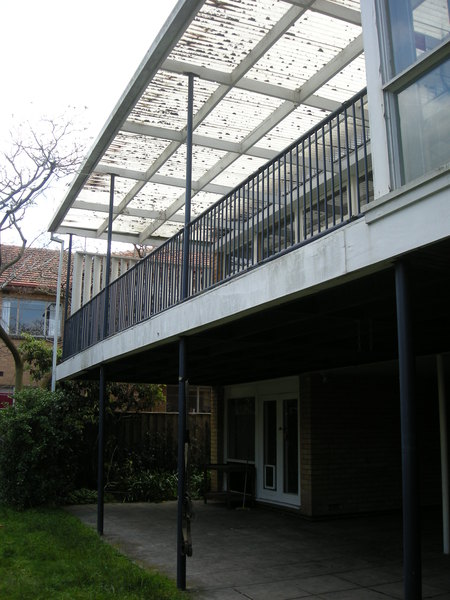 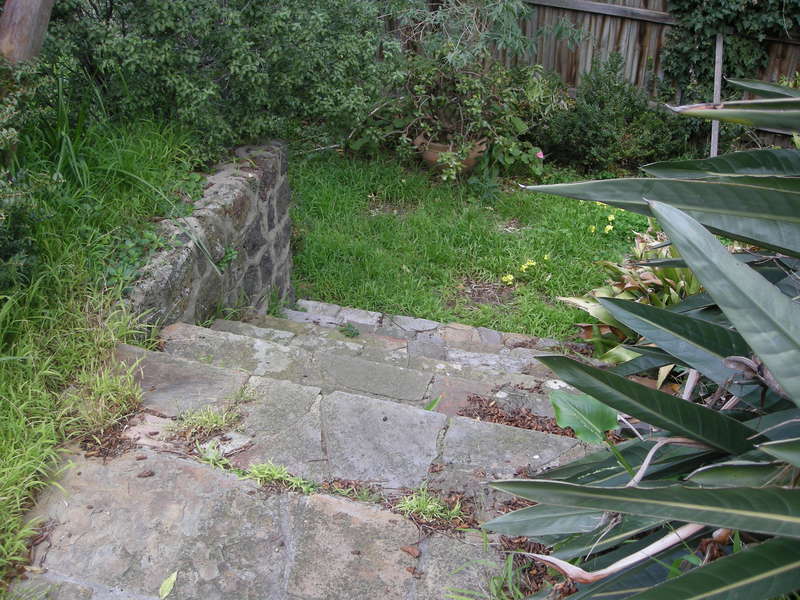 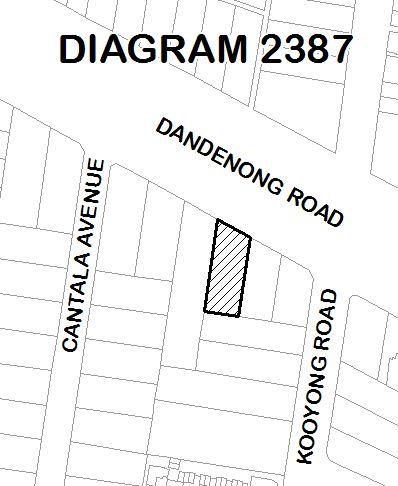 Lind House, including the exterior and interiors of the residence; the low street boundary wall of random-coursed stonework and other stone walls; front and rear undercroft areas; rear concrete staircase and navy-blue painted steel pipe columns and balustrading; landscape elements including paving, stone steps, and elevated letterbox; and fixtures attached to the building interior including, but not limited to, wall panelling, ceiling linings, doors and windows with associated furniture, parquetry floors, in-built upholstery, light fittings, vent grates, intercom system, and in-built furniture, cupboards, cabinets and shelves. The first floor bathroom and kitchen were refurbished in the 1980-1990s, and introduced elements within these spaces are considered to be of non-contributory cultural heritage significance.

Lind House was designed by Russian-born Jewish emigre architect Anatol Kagan, for Polish-Jewish emigre Leo Lind and his wife Dorothy, and was constructed over the period of 1954-55.

Kagan emigrated to Australia in 1939, establishing a successful architectural practice in Melbourne. Kagan specialised in, and became best known for, his designs of large and luxurious residences, particularly in Melbourne's inner-eastern suburbs of Kew, Balwyn and Toorak. Kagan's clientele chiefly consisted of wealthy, self-made emigre businessmen who had also fled Europe in the 1930s and 1940s to seek a new life in Australia.

The house at 450 Dandenong Road, Caulfield North was designed by Kagan for Polish emigre textile manufacturer Leo Lindwaser, who had arrived in Australia in 1947, declaring his occupation as "merchant". Leo Lindwaser and his wife Dorothy established a successful textile business in Melbourne, which later became Lind's Textile Ltd, operating out of Flinders Lane in the 1950s. In 1952, the Lindwasers legally changed their names to Leo and Dorothy Lind.

Ownership of 450 Dandenong Road was transferred to Leo and Dorothy Lind in 1954 and the City of Caulfield Rate Book for 1955-56 records that the house on this site was completed in 1955. The house remained in the Lind family's ownership for nearly four decades, with Leo and Dorothy residing there until their deaths (in 1984 and 1983, respectively), after which time ownership of the house was transferred to their eldest daughter, Margaret. The house was sold to another couple in 1992, who occupied it until 2006, when it again changed ownership. Lind House again changed ownership in 2017 [as of May 2018]. 14 28 May 2018

Lind House is a two-storey butterfly-roofed Modernist freestanding house, sited centrally within a trapezoidal block of approximately 843 sq.m (0.21 acres). The principal living areas, study, powder/cloakroom for guests and four of its five bedrooms are located on the upper storey, with the lower storey containing an entry foyer, the fifth bedroom, a laundry and a tandem garage. Viewed from Dandenong Road, the north-facing elevation's more embellished upper storey visually dominates the lower storey. The Dandenong Road elevation exhibits a range of details and finishes. Cream-coloured face brickwork clads the wall to the east of the garage door and extends around the corner of the east elevation. The undercroft walls feature the same face bricks and random-coursed stonework cladding, with similar stonework cladding to the two-storey wall area along the west-facing side of the facade's projecting bay. The upper storey's window wall comprises a rectilinear pattern of fixed and operable white-painted timber sashes, with a row of navy colourback glass spandrels along its base. The wide eaves of the butterfly roof are supported by exposed tapering rafters, which are painted in a dark tone to contrast with the white-coloured eaves lining. The white and navy blue colour scheme of the exterior is echoed throughout white painted timber elements, the navy blue colourback glass window spandrels, and navy blue-painted steel pipe columns and balustrading.

The dining room features floor-to-ceiling timber-framed windows which contain banks of alternating narrow panes of fixed ripple-glass and solid timber panels in a zig-zag plan arrangement, with the panes of glass angled to face towards the north-east. The internal entry stair is of carpet-wrapped triangular-shaped timber treads supported by white-painted steel framing. The powder/cloak room for guests at the top of the stairs on the second storey is partially screened by a rectilinear grid of lacquered timber framing which contains panels of ripple glass. Interiors of most of the upper-storey rooms contain original finishes and joinery, and some also contain light fittings. The master bedroom and its adjoining walk-in wardrobe, the living room, and the study all feature extensive bespoke built-in timber joinery and furniture, and timber parquetry floors. Original upholstered finishes have also been retained, including the in-built headboard in the master bedroom, and a large cavity sliding door in the living room. The bathroom and kitchen located on the upper storey appear to have been refurbished in the 1980s-1990s.

Many landscape features appear to be intact, including the low random-coursed stonework street boundary wall, and the large, skillion-roofed timber letterbox mounted on steel rods.

Lind House is of architectural and historical importance to the State of Victoria. It satisfies the following criteria for inclusion in the Victorian Heritage Register:

Lind House is significant at the State level for the following reasons:

Lind House is of architectural significance as a fine and intact example of Modernist residential architecture in Melbourne. Designed by Russian-born Jewish emigre architect Anatol Kagan for Polish-Jewish emigre Leo Lind and his wife Dorothy, Lind House is notable for its distinctly European Modernist design elements. Lind House stands apart from many Modernist residences designed by Australian-trained post-war architects as a result, with a number of its typical European features - including its bespoke high-quality in-built timber joinery and furniture likely to have been detailed and fabricated by skilled European emigre craftsmen, powder/cloak room for guests, intercom system, downstairs servant quarters and colourback glass window spandrels - considered to be novelties within the Victorian residential context at the time of Lind House's construction, and reflecting the customs of, and domestic comforts sought by, wealthy members of Melbourne's post-war emigre community [Criterion D].

Lind House is historically significant for its direct and enduring association with notable architect Anatol Kagan, who was one of the group of highly talented, progressive, European-trained emigre architects who made an important contribution to the architecture, town planning, education of architects and town planners, and to the cultural life of Melbourne during and following the Second World War [Criterion H].