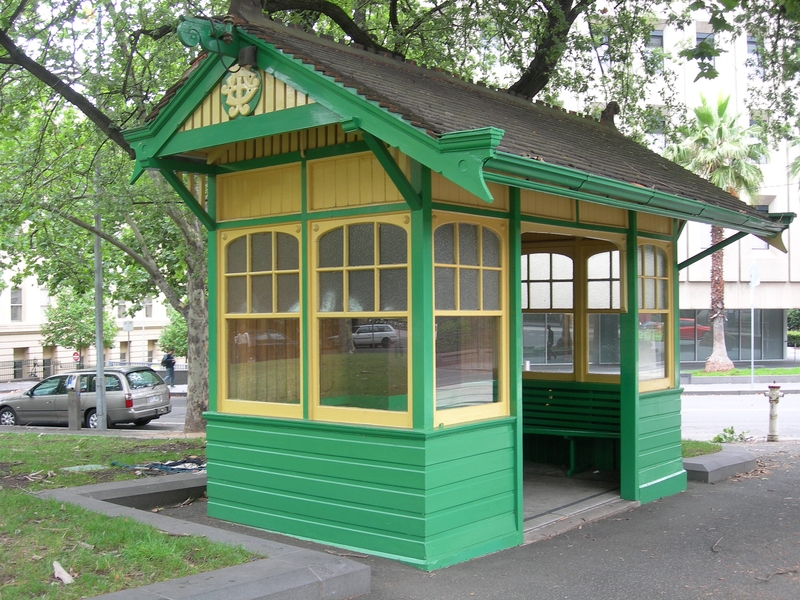 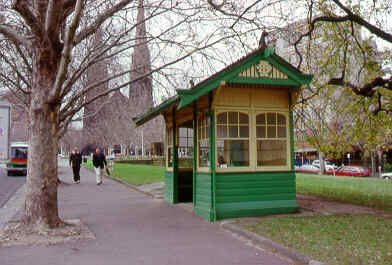 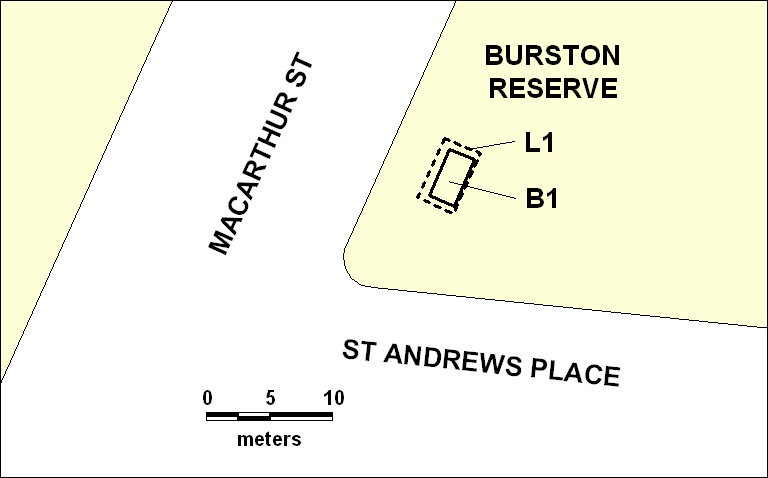 In the early years of the twentieth century the cable tram network of inner Melbourne, which had been built in the 1880s, was augmented by an electric tram network built by municipal tramways trusts in the various expanding suburbs. The tram shelter at Macarthur Street East Melbourne is one of five remaining from from of a distinct group of nine picturesque closed timber shelters built between 1912 and 1927in a style based on Edwardian domestic fashion.

The Macarthur Street East Melbourne and St Kilda Road/Dorcas Street South Melbourne tram shelters were built by the Tramways Board (1916-19) who operated the cable trams. It was designed in 1916 by Frank Stapley, an architect who was also a Melbourne City Mayor and Councillor and an influential advocate for the town planning movement in Victoria. Both were built in 1917.Both were related in basic form to the earlier closed shelter of 1915 at St Kilda Road/Commercial Road. The Macarthur Street and Dorcas Street shelters were also precedents for the St Kilda Road/High Street and Lorne Street shelters of 1927.

Half of the front wall of the shelter facing the tram stop is open, while unlike other shelters of the type, the back wall is entirely clad in horizontal ship-lap boarding. Below the windows the shelter is similarly clad and internally the walls are of horizontal V jointed lining boards. Similar boards cover the ceiling. The benches are of timber frames and slats. The upper halves of timber framed windows are in multi paned patterned translucent glass with a segmental arch head. Vertical boarding between the frame continues above window head height. The gable section of wall is clad in vertical slats spaced to give ventilation. The gable roof is clad in terracotta shingles with a crested terracotta ridge terminated by scrolled terracotta finials. The rafters are exposed under the projecting eaves with a spaced board lining above. The gables project a similar distance to the eaves and are supported on timber brackets with vertical infill. The upper section is filled with a horizontal board at ceiling height to match the barges and an infill of vertical spaced boards. There is a scrolled carving on the projecting ridge beam and on the end of the barges an upturn that hides the end of the gutter and a point on the lower side. This shelter differs from the four other shelters of the type in the shape of the roof, which has projecting eaves on the front side only. This shelter is also unique in retaining its timber Tramways Board monogram on the projecting gables, as well as set in travertine mosaic tile in the concrete floor.

The tram shelter at Macarthur Street East Melbourne is of historical and architectural significance to the State of Victoria.

The tram shelter at Macarthur Street East Melbourne is of historical significance for its association with the cable tramway network, which played an important part in the history of transport in Melbourne. In particular the incorporation of the Tramways Board monogram on the gable and in travertine mosaic tiles laid in the concrete floor indicates its association with the short era of that Board's administration of the network between 1916 and 1919.

The tram shelter at Macarthur Street East Melbourne is of architectural significance as one of only five remaining tram shelters from the city cable tram network which were designed as picturesque pavilions in the domestic Edwardian style of the period. The tram shelter is also of architectural significance as an important example of early twentieth century street architecture. It is situated in the most intact streetscape of any of the five cable tram related shelters of this type. The Tramway Board monograms incorporated into the gables and floor are features unique to this shelter.