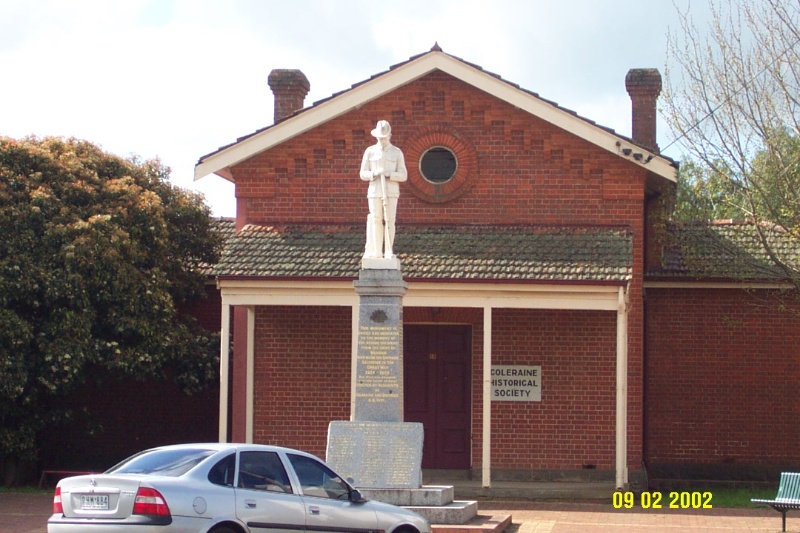 What is significant?
The former Coleraine Courthouse, located at 78 Whyte Street, in the centre of Coleraine is a substantial single storey, symmetrical, face brick building designed and built by the Public Works Department in 1871. Like its immediate neighbor, the Post Office, it was a standard PWD design. It includes a central courtroom, adjacent offices and high level fenestration typical of judicial buildings. Beyond an open courtyard facing Whyte Street, now with a war memorial, there is a simple timber verandah. Many of the original furnishings and furniture survive, including the magistrates bench, the witness box, shelving used by the clerk of the court, the pews and the original mallet. The building retains a very high degree of integrity and is in good condition.

How is it significant?
The former Coleraine Courthouse is of architectural and historical significance to the community of Coleraine and Southern Grampians Shire.

Why is it significant?
The former Coleraine Courthouse is of architectural significance as one of only two brick courthouses in the study area, and as a typical example of the Public Works Department oeuvre. The intactness of its nineteenth century interiors, including a complete set of timber courthouse furniture, provides an accurate interpretation of its former use as a practicing court. It has further architectural significance as one of a group of substantial civic structures in Whyte Street which form a focus for the Coleraine community.

The former Coleraine Courthouse is of historical significance because it was the location for the administration of justice for the district for over a century. The forecourt, containing the town's war memorial, is an important civic ceremonial space. Located in a prominent position next to the post office, the Coleraine Courthouse has further historical significance as a landmark site, and is one of a group of buildings forming the focus of the town.