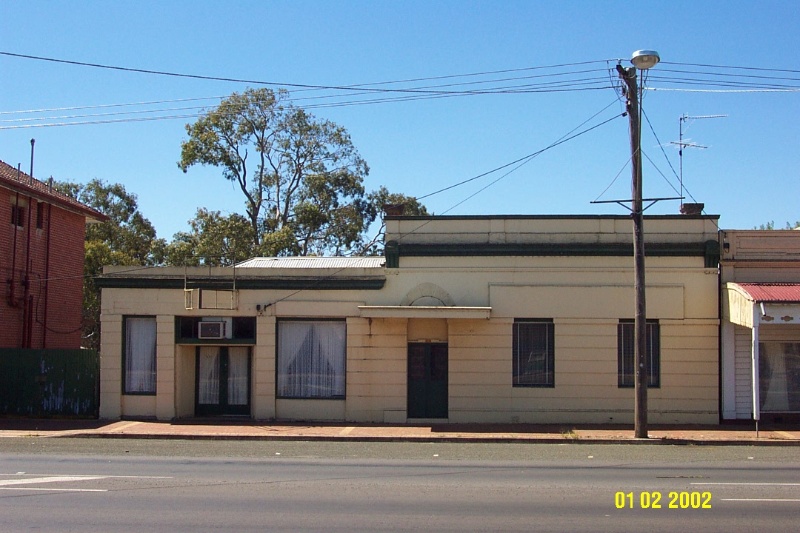 The former Black Horse Inn, 66 Whyte Street, Coleraine, is a single storey rendered brick structure composed of two parts. It is the only survivor of a row of small hotels which operated on the northern side of Whyte Street, and included the Victoria and National hotels, since demolished. The lower, western section appears to be the older part, and is believed to have been built before 1865. Its original openings have been replaced with a modern plate glass window and a recessed double door. The eastern section is taller, with a single arched entrance and two double hung sash windows. The building is in a simple Renaissance revival style, with rusticated walls, surmounted by a plain cornice and parapet. For many years the hotel was owned by Isaac Gelston Gray, former police officer, who became a publican, then a storekeeper and auctioneer. Changes in the use of the building reflected the various changes in Gray's career. The interiors of the hotel have been altered, and it is presently used as a private residence.

The former Black Horse Inn, 66 Whyte Street, Coleraine is of historical and architectural significance to the community of Coleraine and the Shire of Southern Grampians.

The former Black Horse Inn is of historical significance as the earliest extant hotel, and one of the oldest buildings to survive in Coleraine. It has further historical significance for its association with the colourful local identity, Isaac Gelston Gray, whose varied career was reflected in the many uses to which the building has been put.

The former Black Horse Inn is of architectural significance as a typical example of the modest single storey hotels which lined Whyte Street in the mid-nineteenth century, and for the simple commercial style and form of the building.