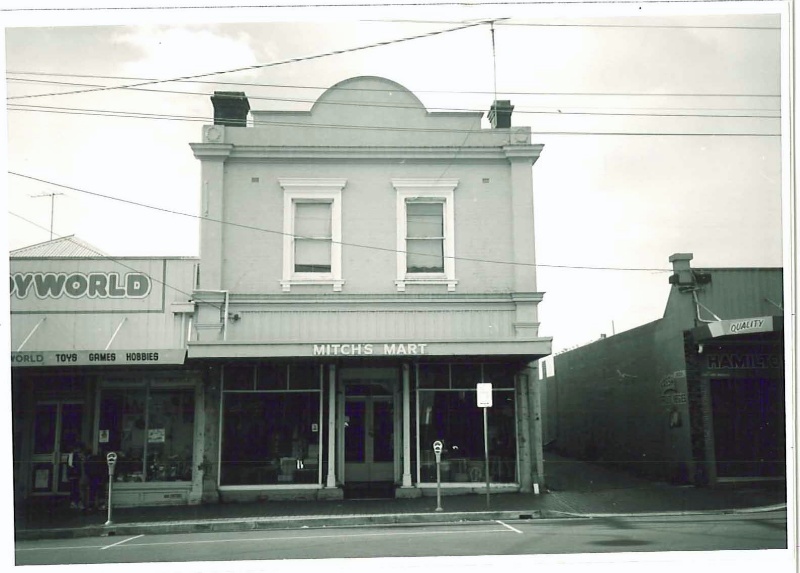 SIGNIFICANCE: »One of the more intact shops in what was originally the heart of the business street of Hamilton. Important with its single storey fraternal twin as part of the streetscape

Built on land orininally sold by the Crown in 1851 to T Finn and therefore amongst the first ever sold in Hamilton, this shop is of local historic and architectural significance. It appears to have been built in the early 1870s and there is some suggestion that it was formerly a bank. ([i]) The building's style is conservatively classical, appropriate for a bank, with the facade austerely trabeated and the first floor decorated with two windows chastely detailed as simple aedicules. The building is a fraternal twin with its single storey next door neighbour which is reputed to have been built with the material salvaged from the original Christ Church, formerly called St Botolph's. ([ii]) To support this the Hamilton Sewerage Authority Drainage Plan which is shared by the two distinguishes betyween the stone construction of No 128 and the brick construction of No 129 Thompson Street. ([iii]) The shop front has been modernised in the Edwardian period. Otherwise the building is substantially intact and remains in good condition. It plays a key role in the streetscape as one of the most intact commercial buildings in Thompson Street.

[i] There is a Department of Planning and Housing File for the site which nominates it as such but no corroborating evidence has been found.