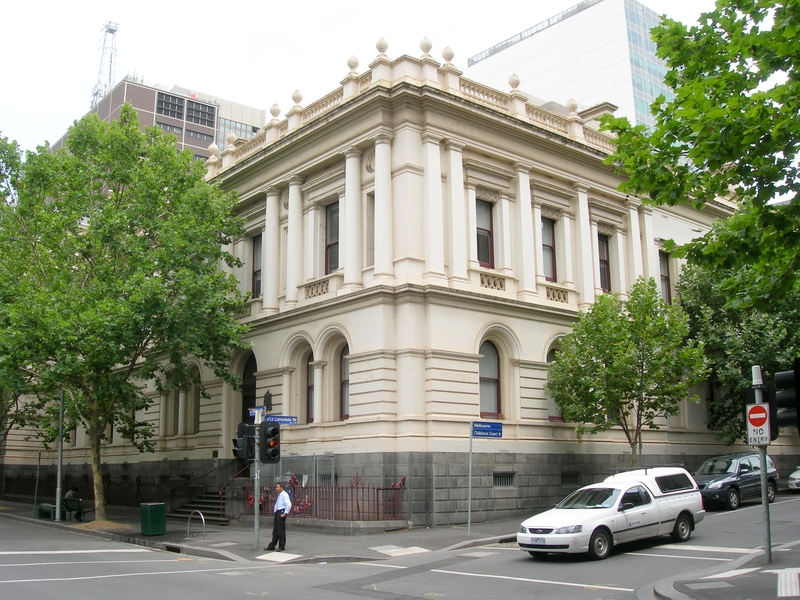 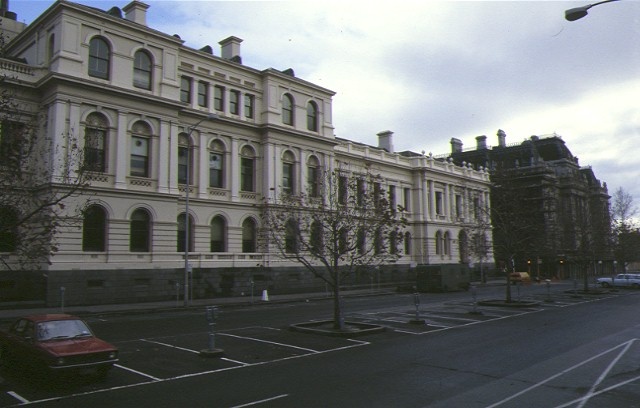 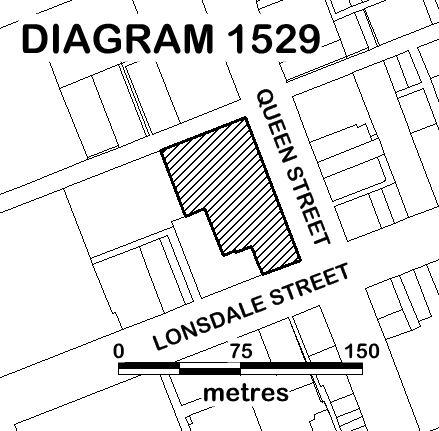 The Titles Office, 283 Queen Street, was erected in three stages. The first stage, begun in 1874 and finished in 1877, comprised an L-shaped two storey office building built around the strong room. The strong room was extended to its present size in 1884-85. Between 1887 and 1889 the perimeter office building was completed to give the current external appearance occupying the full length of a block to Queen Street. The designs for the perimeter structure were undertaken by the Public Works Department and are attributed to J J Clark. The main facade is symmetrical about a central three storey block, and sits on a bluestone plinth. The two storey wings are recessed and terminate in pavilions that project to the same line as the central block. The facade employs the Doric style in a quite severe and plain manner. The rhythm of the paired round arch windows on the ground floor is mimicked by paired columns on the first storey and by pairs of urns on the balustraded parapet. Construction is of rendered brick. The Old Law Office (formerly the Strong Room) has an interior incorporating arched, fire proof floor construction, known as the Dennett system. Fire precautions were essential to protect the irreplaceable Certificate of Titles and other land-related documents that the building houses.

The Titles Office is of architectural, technical and historical significance to the State of Victoria.

The Titles Office is architecturally significant for exemplifying the dictum of the Public Works Department, led by William Wardell until 1878, that architectural style needed to be as simple as possible so long as proper architectural effect was preserved. The restraint is clearly evidenced by the severity of the Doric order employed by architect JJ Clark, and decoratively the building is in contrast to his masterpiece, the Treasury Building of 1858. However, the composition of the Titles Office still draws on the Italianate style and on Renaissance palazzos for inspiration to produce a building with serene and sedate grandeur, and one of the most extensive public building facades in Melbourne.

The Titles Office is technically significant for the range of fire precaution measures employed. The strong room with its superb interior is an exceptional example of early high security and fire-proof construction in Victoria. The floor, built on the Dennett system, is a development of fire resistant construction employing iron bressumers connected by brick arching and covered with a layer of cement.

The Titles Office is historically significant as a building signifying the change of law for the recording of land ownership. The 1862 Real Property Act introduced the Torrens System to Victoria and dealings under the new Act were dealt with exclusively from the new building.