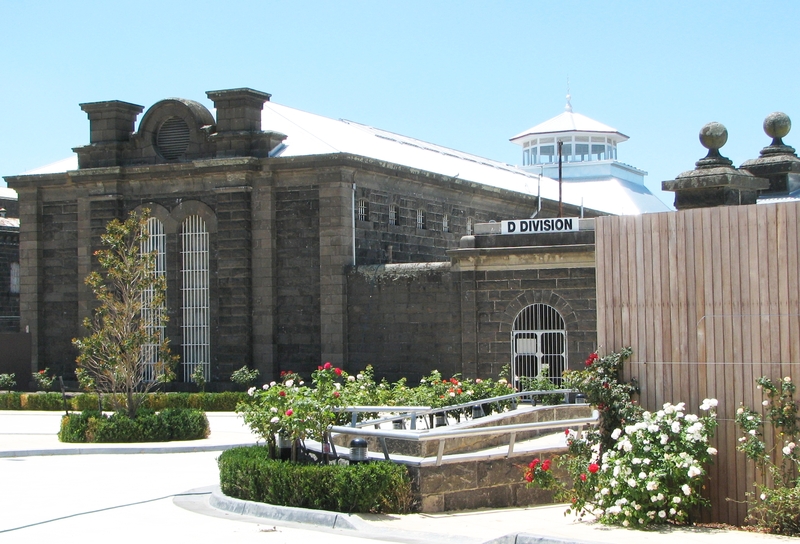 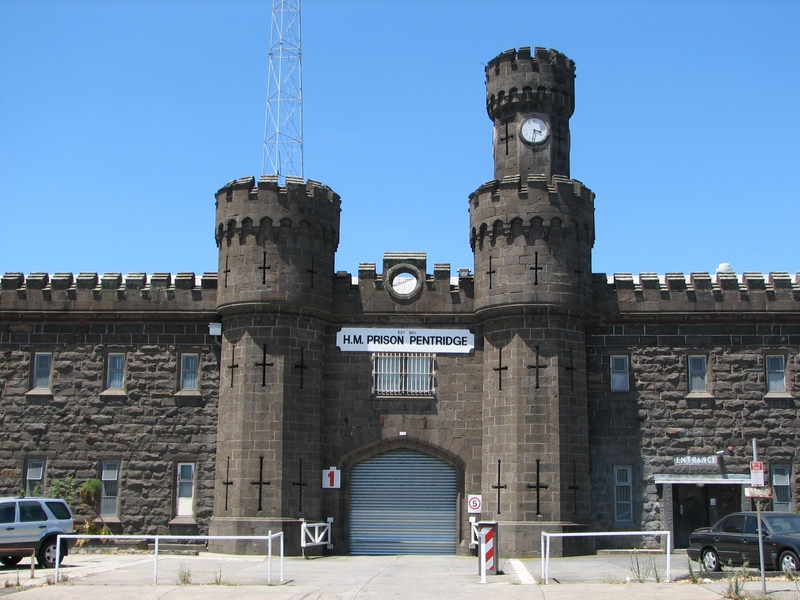 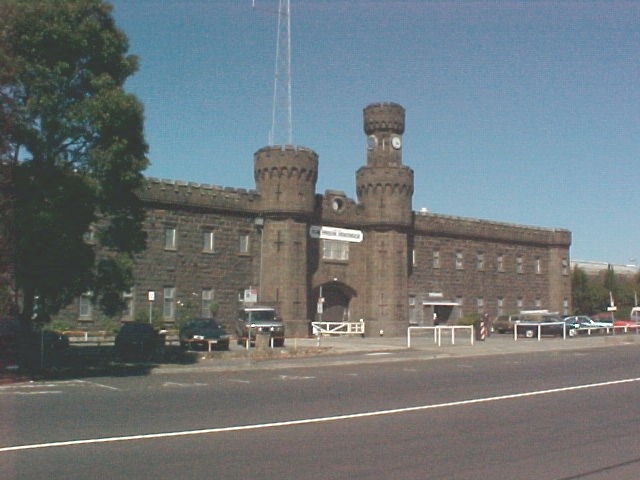 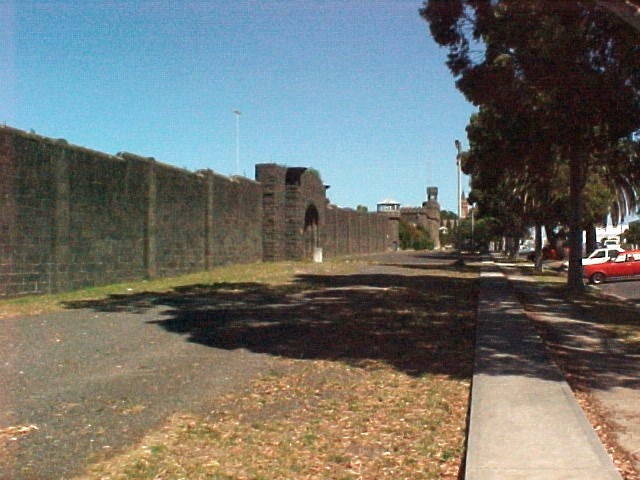 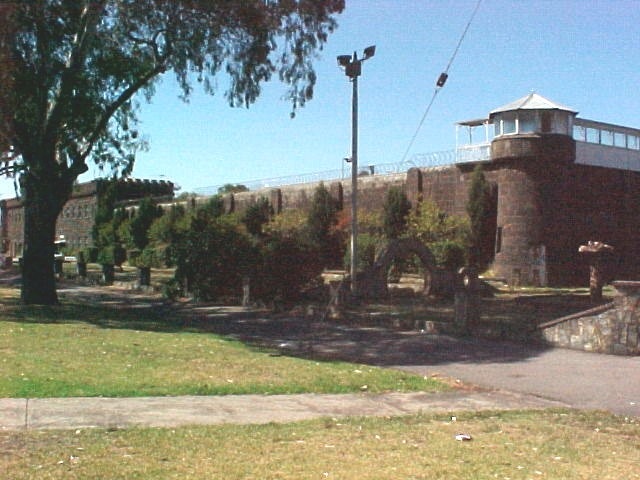 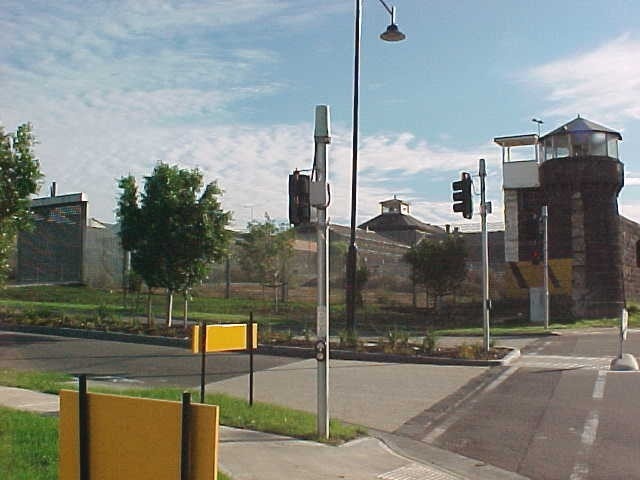 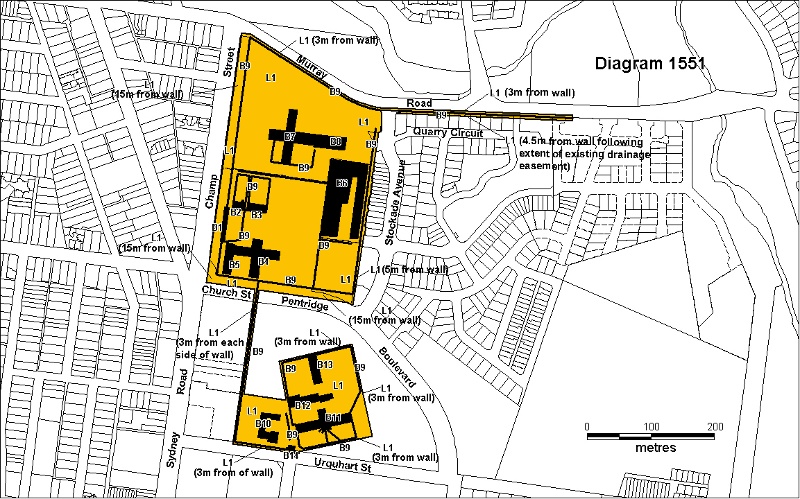 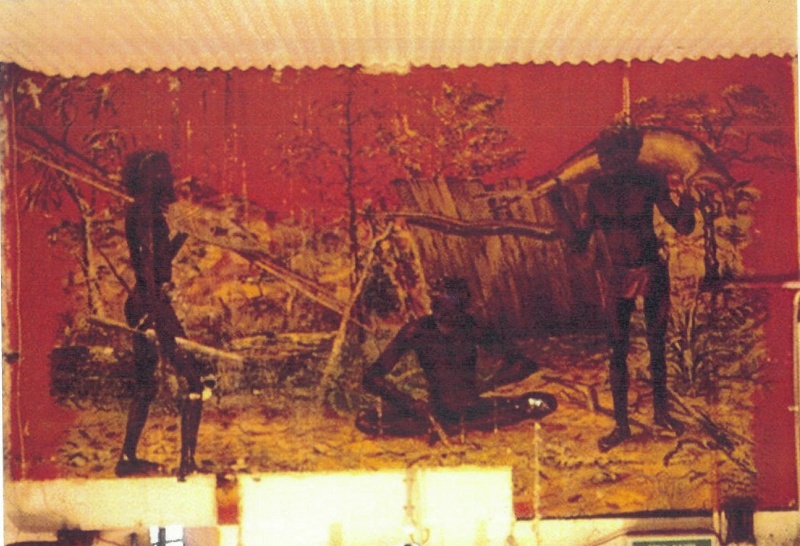 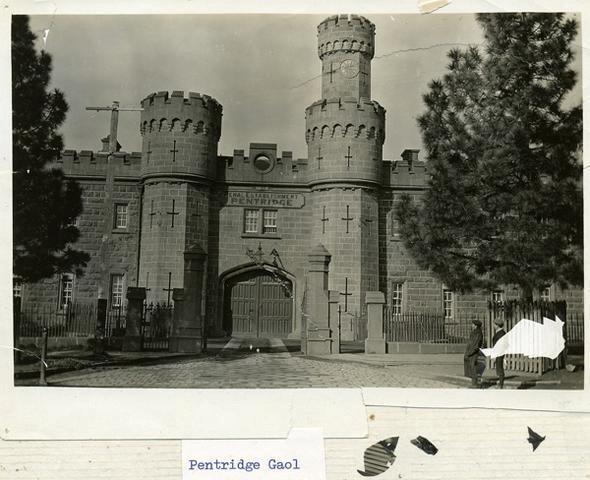 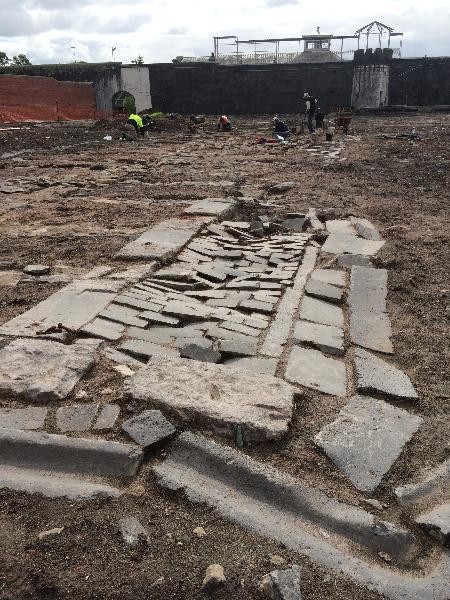 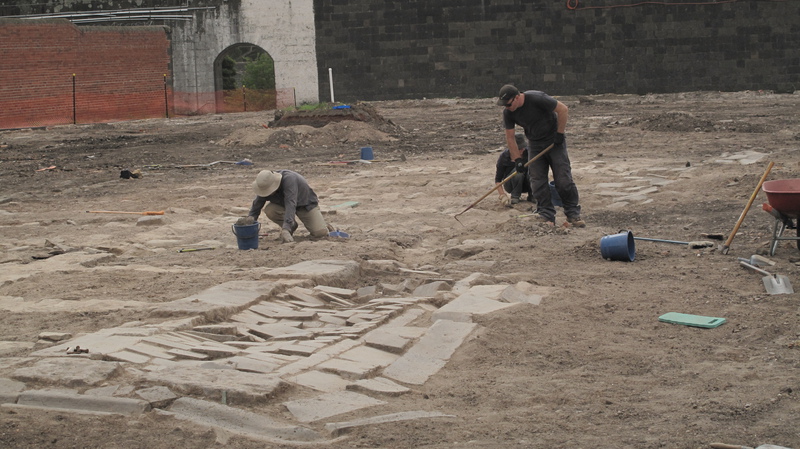 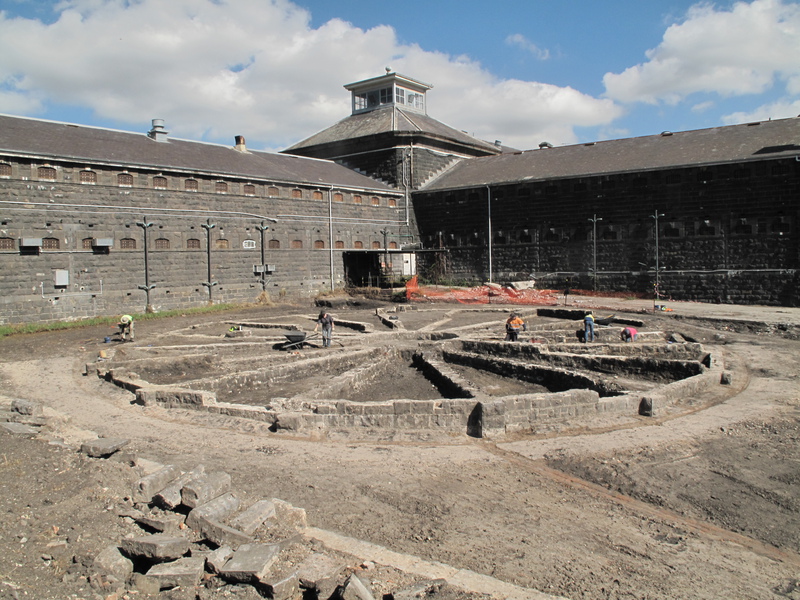 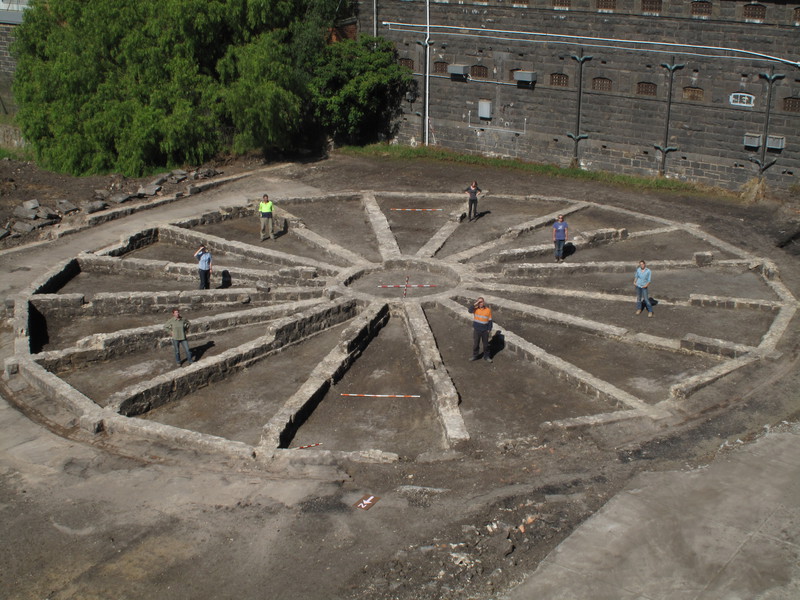 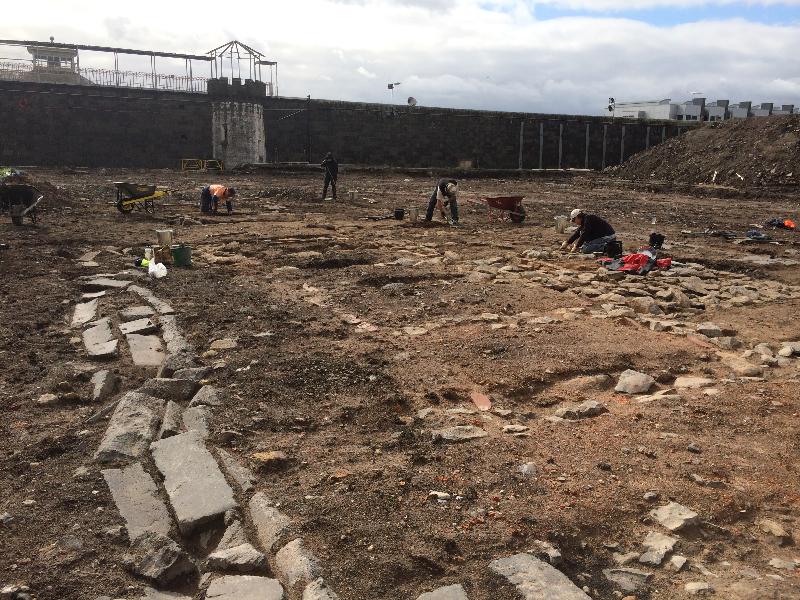 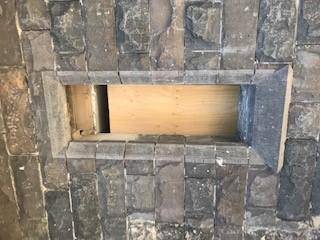 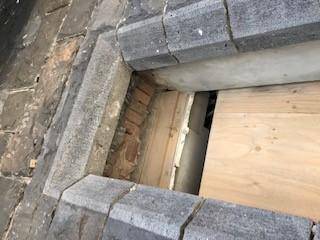 The former HM Pentridge Prison was established in December 1850. The structures remaining from the prison consist of A Division, B Division, B Division Annexe (former kitchen), D Division including the exercise yards, the former hospital (Former E Division), F Division, G Division (Jika Reformatory for Girls), H Division, the main gate, Administration Building, the former Chief Warders and Overseer of Works Residences, the Industries Buildings, the laundry, the south gate to the Women's Prison, and remaining bluestone walls, gates and lookout towers.

The first stage of the prison was the 1850 to 1857 Pentridge Stockade Complex, a relatively ad-hoc group of structures built by prison labour using predominantly local materials. None of these structures survive, although the boundary of the prison was established at this stage. The second phase undertaken in the late 1850s and early 1860s was the construction of Inspector General William Champ's model prison complex, based on the British Pentonville model and incorporating a relatively sophisticated system of prisoner classification and penal reform. These were all constructed of locally sourced bluestone. The prison was gradually expanded and developed in stages, reflecting both developments in design as well as broader Government policies relating to the operation of the prison system. Following the Stawell Royal Commission of 1870, an extensive work program for prisoners was introduced at Pentridge and a complex known as the 'Industries' was constructed. These included a timber yard, a woollen mill, carpenters and blacksmiths workshops completed in 1879, and tailors and bootmakers workshops completed in 1886.

From the 1870s Pentridge was also the location of reformatories for girls and boys, established following the findings of the Stawell Royal Commission of 1870. The Jika Reformatory for Boys was accommodated in an existing building (F Division), between 1875 and 1879, while a purpose built reformatory was constructed for Protestant Girls (G Division), operating between 1875 and 1893.

In 1900 labour yards for A Division were completed. During the 1950s these yards were later converted to a high security block which became known as H Division. In 1924 Pentridge replaced the Melbourne Gaol as the main remand and reception prison for the metropolitan area. The bodies of approximately thirty-six prisoners executed at the Melbourne Gaol were exhumed and relocated to Pentridge, where they were reburied. Pentridge also became the venue for ten prisoner hangings, until the last Victorian prisoner to suffer the death penalty, Ronald Ryan, was executed in D Division in 1967. In 1960 during a term spent in Pentridge, the Aboriginal artist Ronald Bull painted a mural depicting a traditional tribal scene. The mural survives and is located at the east end of F Division. In April 1995 the Office of Corrections ordered that the six main towers at Pentridge be closed, since most of the high security prisoners from the gaol had been relocated to Barwon as part of the downgrading of Pentridge to a medium security prison. The prison was finally closed in 1997 and the land and buildings subsequently sold.

This site is on the traditional land of the Kulin Nation

The former HM Prison Pentridge is of historical, architectural, archaeological, scientific (technological) and aesthetic significance to the State of Victoria.

The former HM Prison Pentridge is of historical significance as the largest prison complex constructed in Victoria in the nineteenth century.

The former HM Prison Pentridge is of architectural and historical significance as a nineteenth century complex of buildings that demonstrates a number of phases in the development of the penal reform system. Most of these structures still survive, largely intact. The range of cell blocks, workshops and other buildings, the relatively dispersed layout of the buildings and the large scale of the site as a whole demonstrate the unique character of Pentridge as the principal establishment for long-term prisoners. The planning of A, B and D Divisions are representative examples of the overwhelming influence and continuing development of British planning models, from the 1830s until the end of the nineteenth century. F Division is a rare surviving example of early nineteenth century prison buildings. The former prison is of architectural significance due to its monumental size and the austere Classical style of the nineteenth century prison buildings. The complex of buildings and walls are important for their expression of the requirements of containment and order.

The former HM Prison Pentridge is of historical significance in the history of child welfare in Victoria. It was the location of reformatories for both girls and boys, established following the findings of the Stawell Royal Commission of 1870. The prison complex includes the purpose-built Jika Reformatory for Protestant Girls (G Division), which operated between 1875 and 1893.

The former HM Prison Pentridge is of archaeological significance for its archaeological features, deposits and relics that relate to the construction and use of the site. The burial area and industry refuse site adjacent to the east wall of the F Division includes the burial sites of all executed prisoners relocated from the Old Melbourne Gaol between 1929 and 1937, and the burials of nine prisoners executed at Pentridge between 1928 and 1951. The area adjacent to the east wall of D Division is significant as the former burial site of Ronald Ryan, and as the site where executed prisoner burial remains were reinterred in 2011.

The former HM Prison Pentridge is of aesthetic significance due to its grim and imposing bluestone walls and towers which are important landmark features.