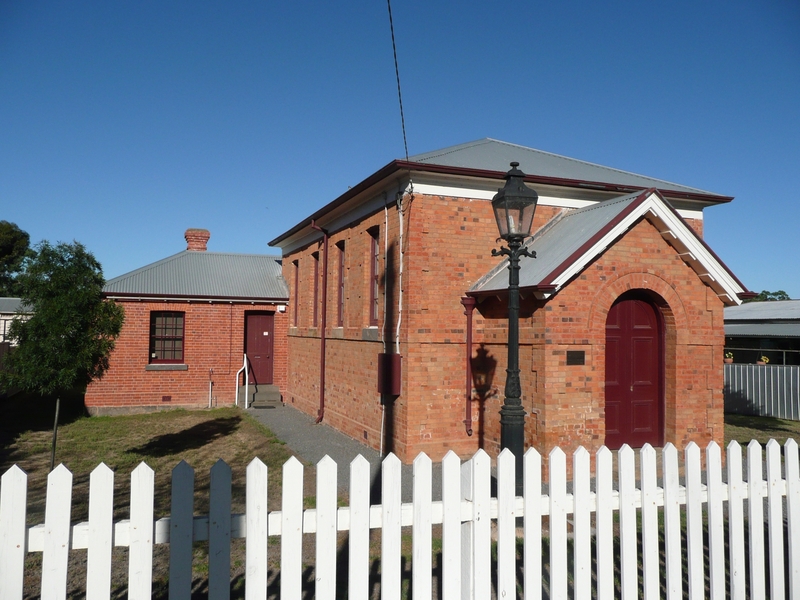 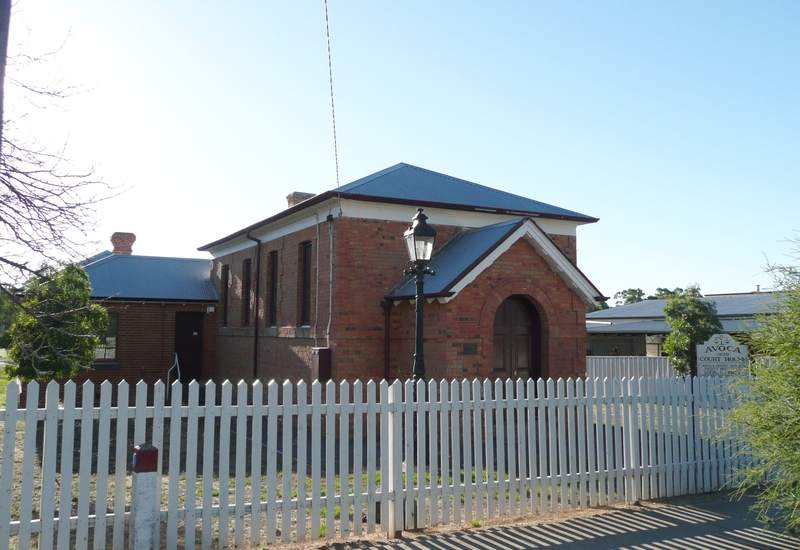 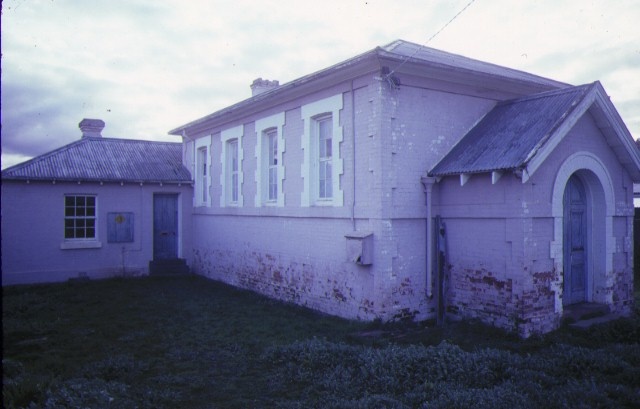 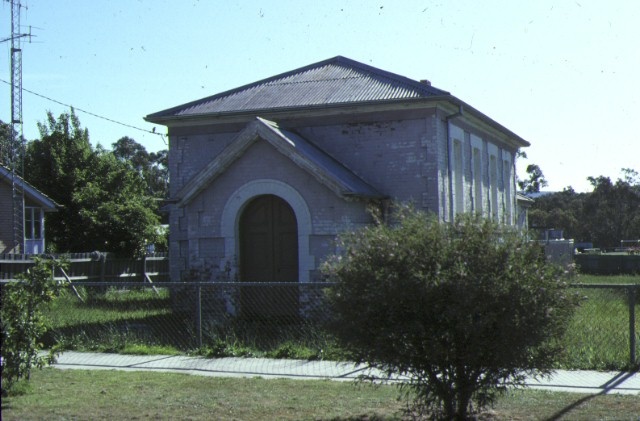 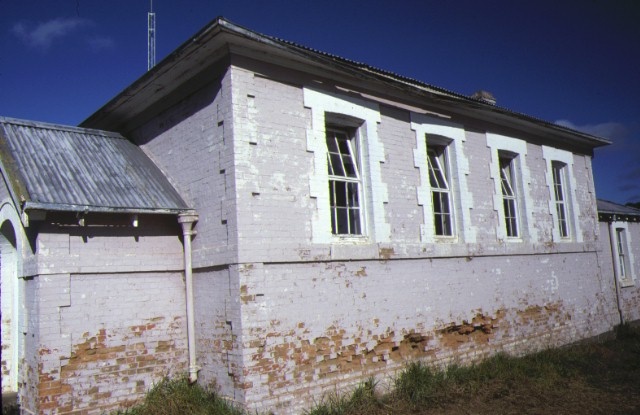 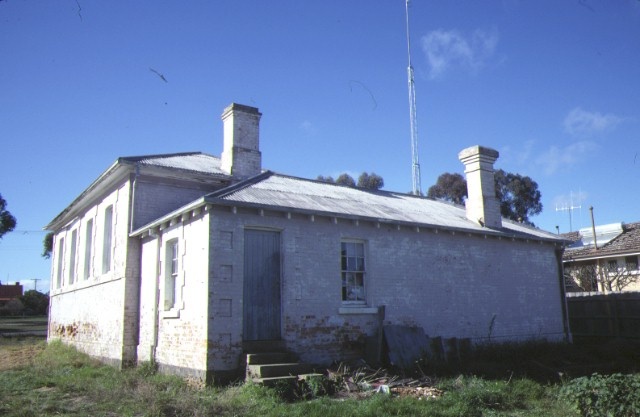 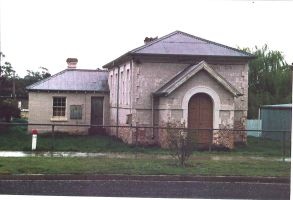 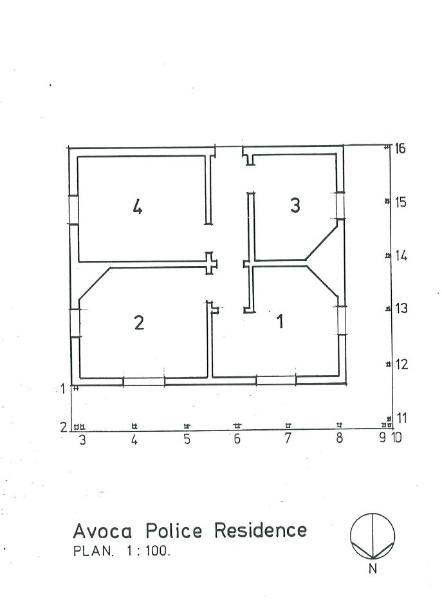 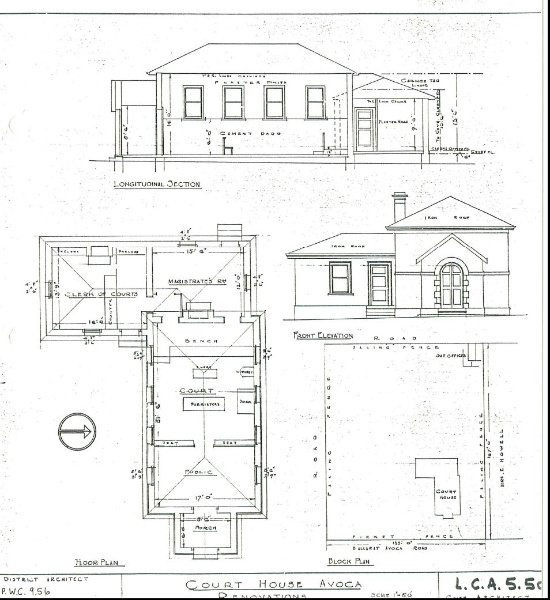 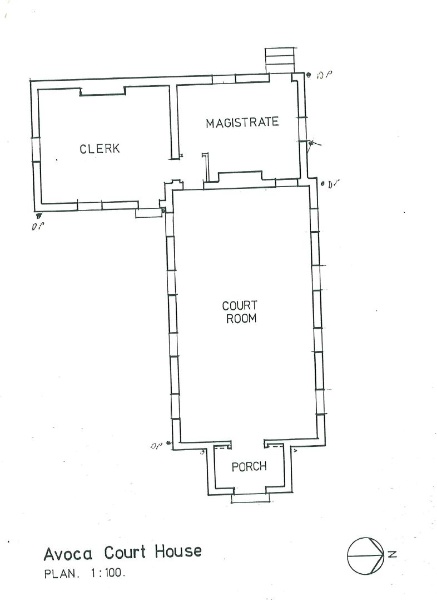 What is significant?
The Avoca Court House is a small, single-storey brick structure built in 1858-59 in response to rapid and substantial population growth generated by the rush for alluvial gold in Avoca in central Victoria in the 1850s. The building occupies a site reserved for public purposes, and forms part of a broader judicial and police complex that comprises a police magazine (1860) [H1548], police residence (c.1859-60) [H1661], and lock-up (1867) [H1660]. The court house was also formerly adjacent to the post-and-telegraph office, and the gold sub-treasury (now demolished). This cluster of public buildings was supported by the creation of the Shire of Avoca in 1864.

The Avoca Court House was built in a Renaissance Revival style to a design by the Public Works Department. Smith and Scott won the contract in September 1858. A further contract to extend the building was let a month later and the court opened in 1859.

The Avoca Court House is constructed of brick on stone footings. It has a shallow hipped roof clad in corrugated iron (originally slate). The building's simple form comprises a rectangular court room with an adjacent magistrate's room, a clerk of courts room, and a gable-roofed porch. Notable elements of the design include the window and door surrounds, quoins, string and eaves courses, and a round-headed entrance door.

The Avoca Court House was initially built to accommodate the local Court of Petty Sessions and the local Court of Mines (or gold warden's court). Courts of Mines were established in Victoria in 1857 to hear mining disputes; they replaced an earlier system of Local Courts or Local Boards that operated from 1855 in several of the larger gold-mining towns, including Avoca. In 1856, the number of mining cases heard at the Avoca Local Court was surpassed only by those at Ballarat and Bendigo. This level of activity presumably contributed to the need for a more substantial court house in Avoca. Its construction in 1858-59 came at a time when government revenue from gold-mining was used to fund extensive public building. Work on the building continued into the 1860s. It was upgraded to a Court of General Sessions in 1863.

How is it significant?
The Avoca Court House is of historical and architectural significance to the State of Victoria.

Why is it significant?
The Avoca Court House is of architectural significance as a rare surviving example of a small Victorian court house built in the late 1850s. It is one of the earliest surviving court houses in Victoria. It is also significant for its long period of operation spanning 120 years (1859-1979).

The Avoca Court House is of historical significance for representing demand for, and rapid growth in, the provision of public administration, particularly judicial services, on the goldfields, in the wake of dramatic population growth in the 1850s. It is part of an important and extensive network of court houses across the central Victorian goldfields area. The small scale of the building demonstrates the government?s willingness to establish an intensive network of judicial services across the mining towns of central Victoria.

The Avoca Court House is also historically significant as an element within a broader group of police buildings that includes a police magazine (1860), a police residence (c.1860), and a police lock-up (1867). The survival of such a comprehensive and intact group of small public buildings is rare in Victoria. The Court House also makes a vital contribution to the wider historic fabric of the important goldfields town of Avoca.
[Online Data Upgrade Project 2004]