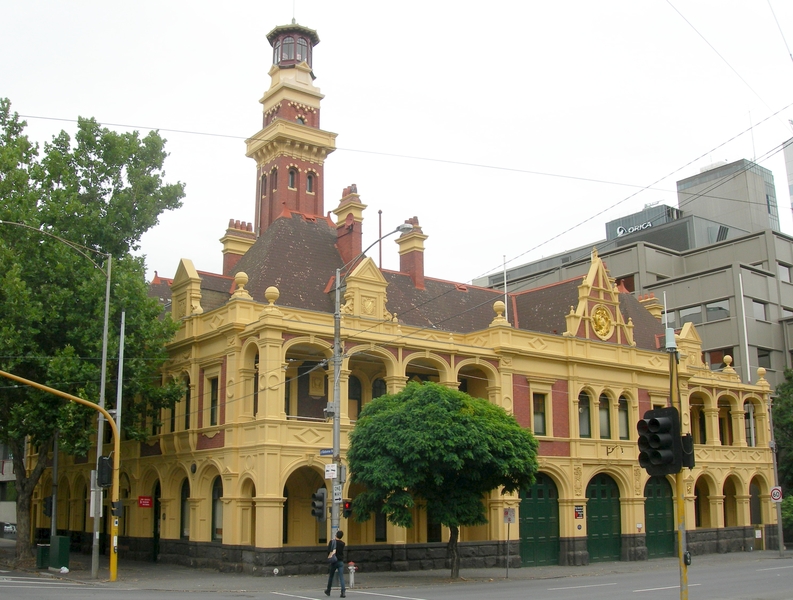 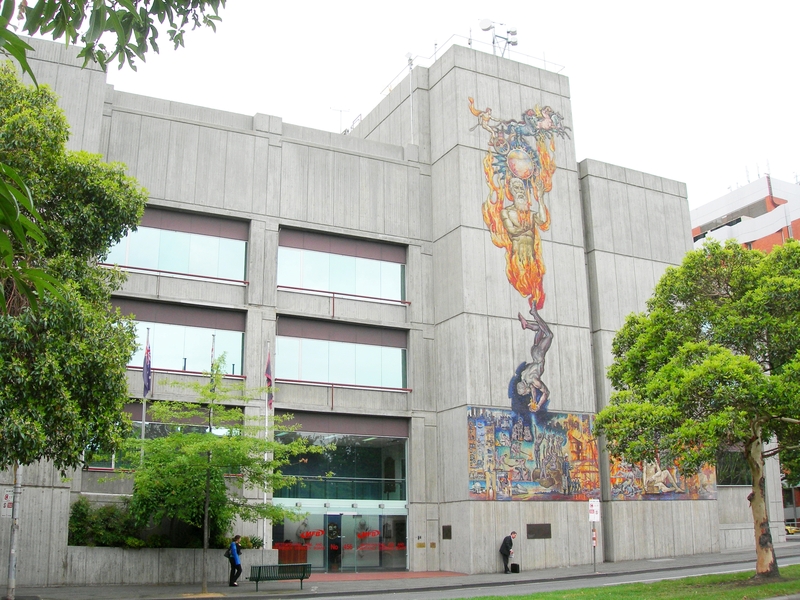 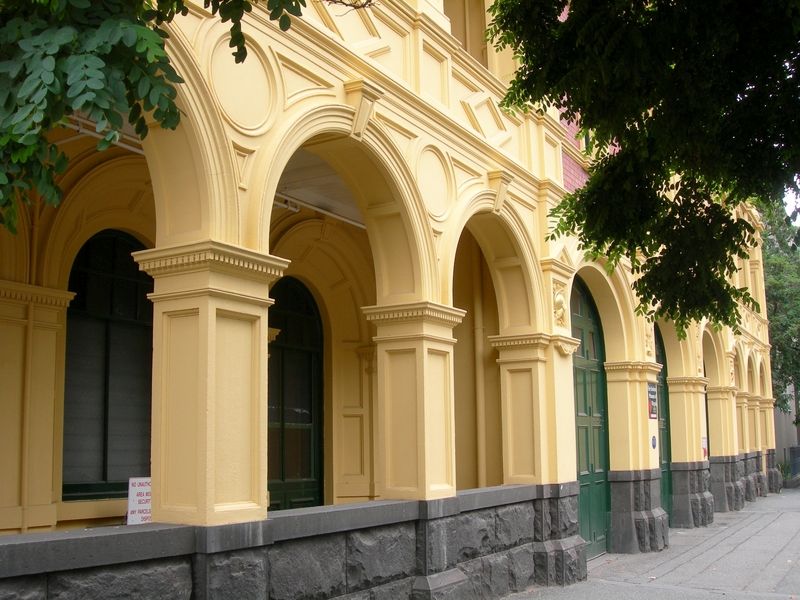 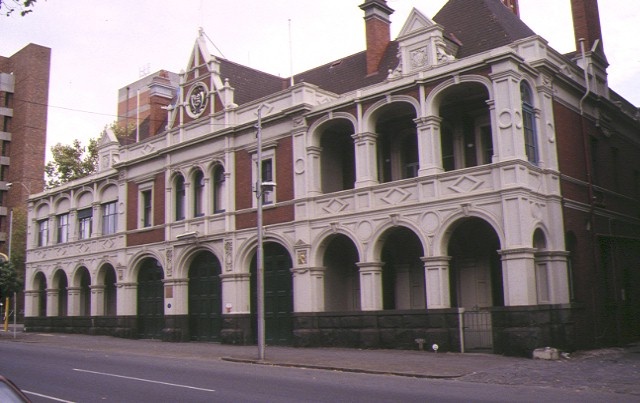 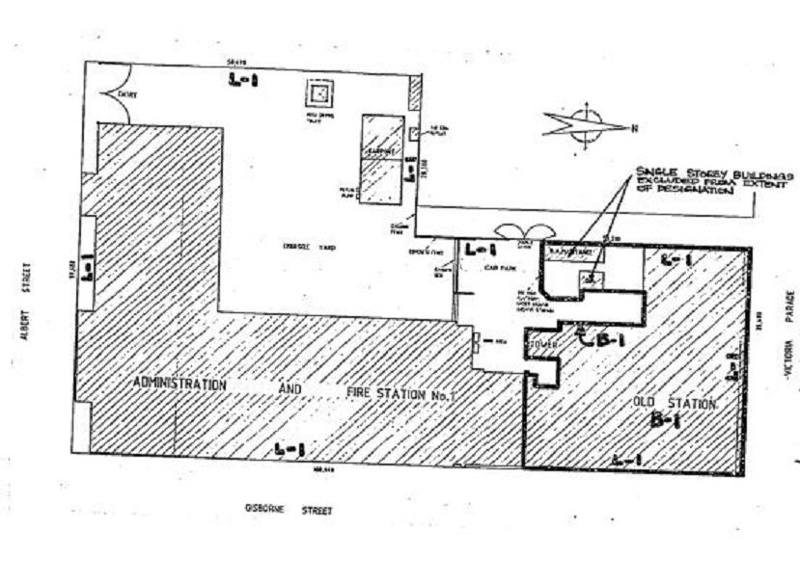 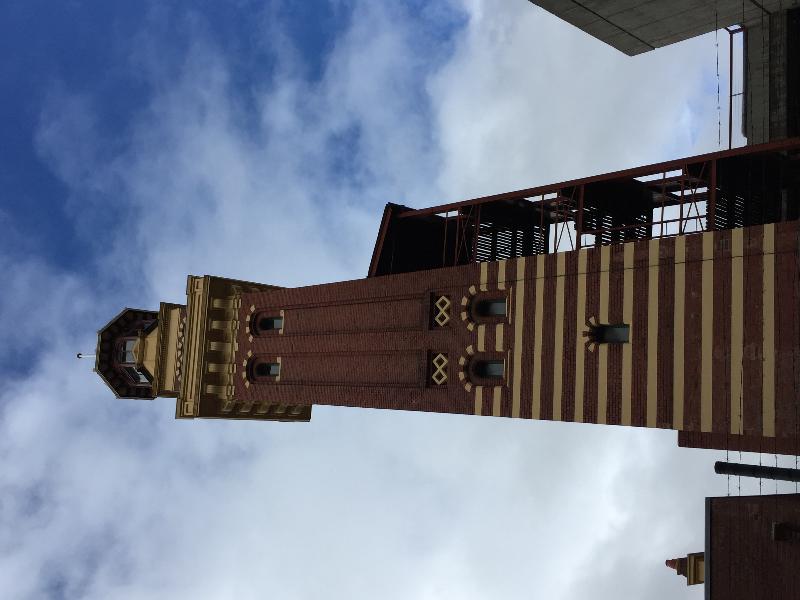 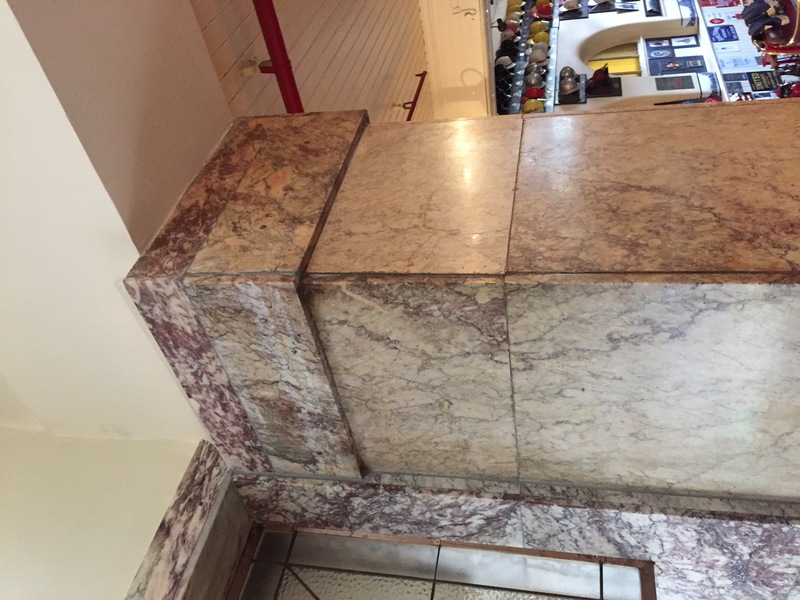 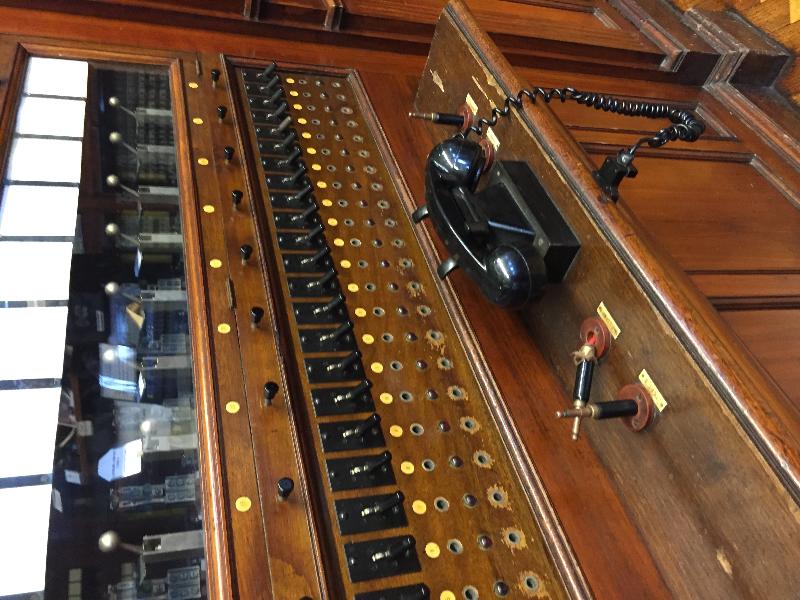 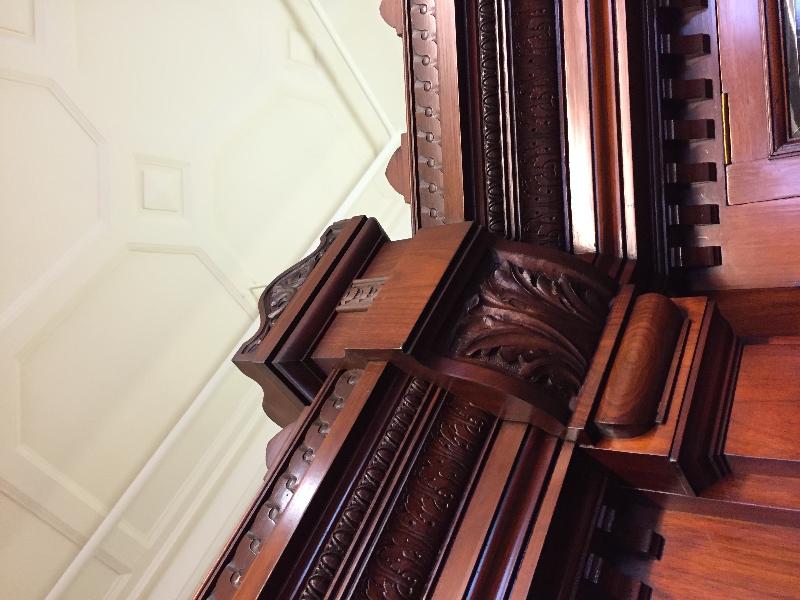 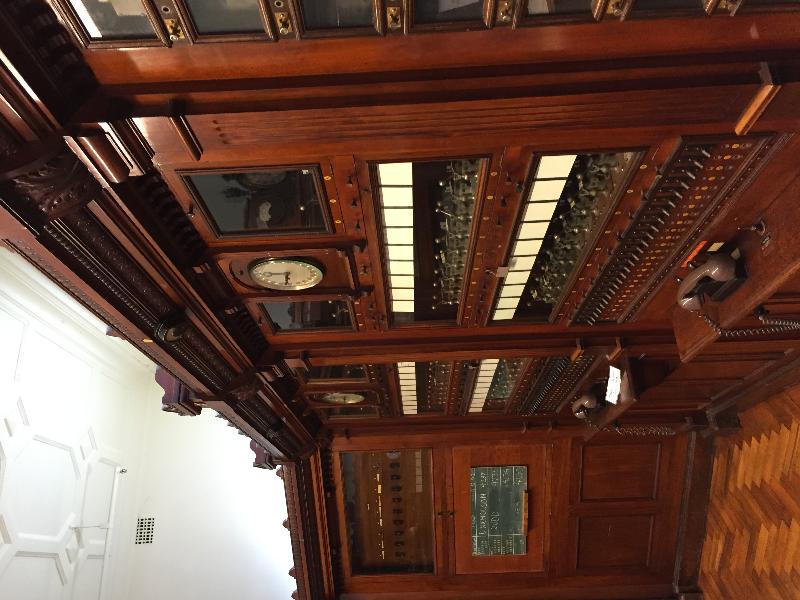 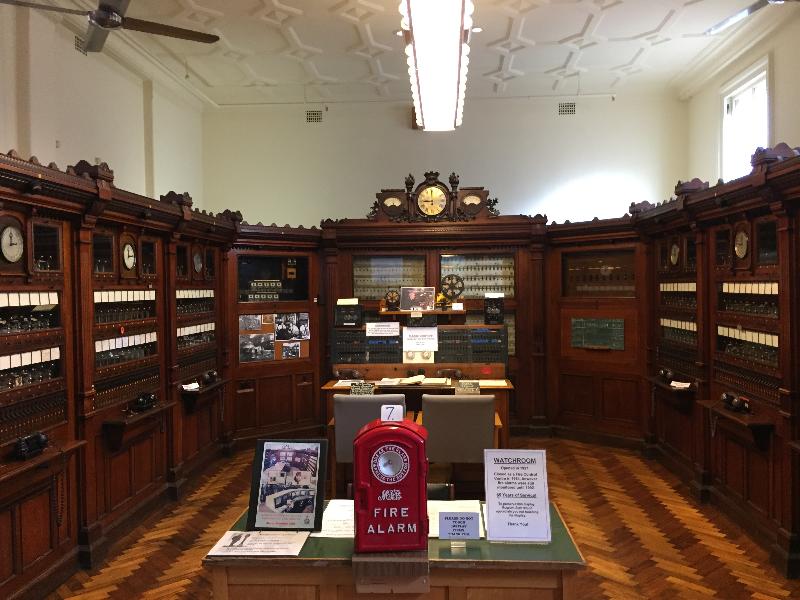 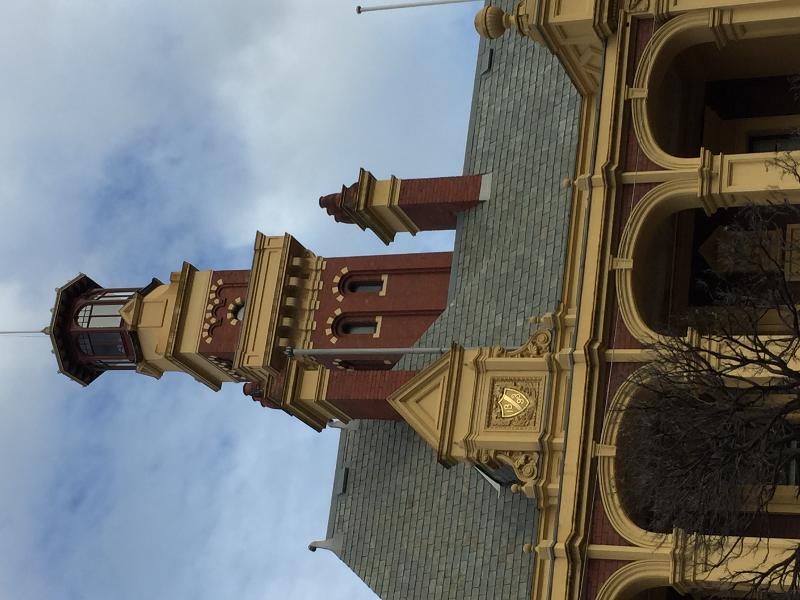 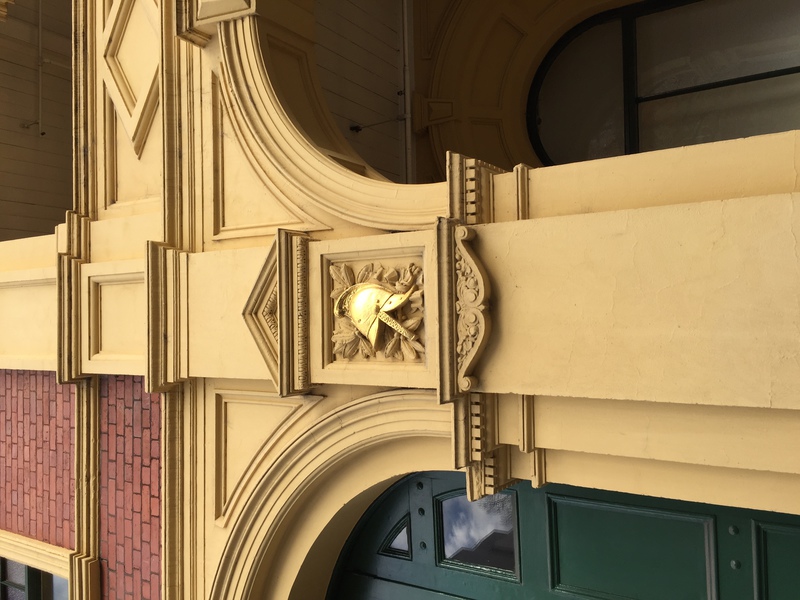 The Eastern Hill Fire Station is a two storey brick building with accompanying watch tower built on an elevated with a wide panorama of the City. Architectural firms Tayler & Fitts, and Smith & Johnston designed the fire station in collaboration as a merger of two competition winning designs. Thomas Cockram & Co. constructed the building at a cost of nearly £16,000. The fire station was opened in 1893 as the headquarters station for the newly established Metropolitan Fire Brigades Board. Residential and workshop extensions, made to the rear of the building in the 1920's were replaced by a new head station building in 1978, and in later years the west wing of the original building was demolished. The Eastern Hill Fire Station displays some traces of the Queen Anne revival style that was popular in Britain in the 1870s and 1880s. The contrasting materials of red brick and cement, the use of parapeted gables with flanking scrolls, the steeply pitched roof and tall chimneys all contribute to this style. The building remains essentially a composition in the classical style, combining arcuation and trabeation. The Eastern Hill Fire Station is composed of two two-storey arcades flanking a central pavilion. The ground floor arcade is raised on a bluestone plinth. The upper storey arcade has depressed arches. The tower, with a cast iron and glass lookout and a projecting lower balcony is 150 ft. high. It was served by a direct-current electrical lift. The tower's style, with arched openings and niches, is reminiscent of Italian Romanesque campaniles.

The Eastern Hill Fire Station is of architectural and historical significance to the State of Victoria.

The Eastern Hill Fire Station is architecturally significant for its distinctive massing enhanced by its unusual stylistic treatment. Stylistically it borrows elements from a number of sources, including the Queen Anne revival, but it is unified by classical principles. The Eastern Hill Fire Station is important as a late work of two prominent architectural practices, Tayler & Fitts and Smith & Johnston. The building is significant as a representative and essentially intact example of a building type. The ground floor boardroom and the watch room installed in the former hayloft in the 1920's are significant intact elements. The steel framed corrugated iron clad training structure attached to the south side of the watch tower recalls the use of the extraordinary "hook and ladder" technique which enabled firemen to gain external access to multi-storey buildings.

Metropolitan Fire Brigades Board. It is a focal point in the historical development of organised fire fighting in Melbourne. The original building remained the Board's flagship for nearly ninety years and set the standard for the development of fire fighting installations throughout the metropolis. The tall watch tower, which dominated the city skyline for over half a century, became an important civic landmark.