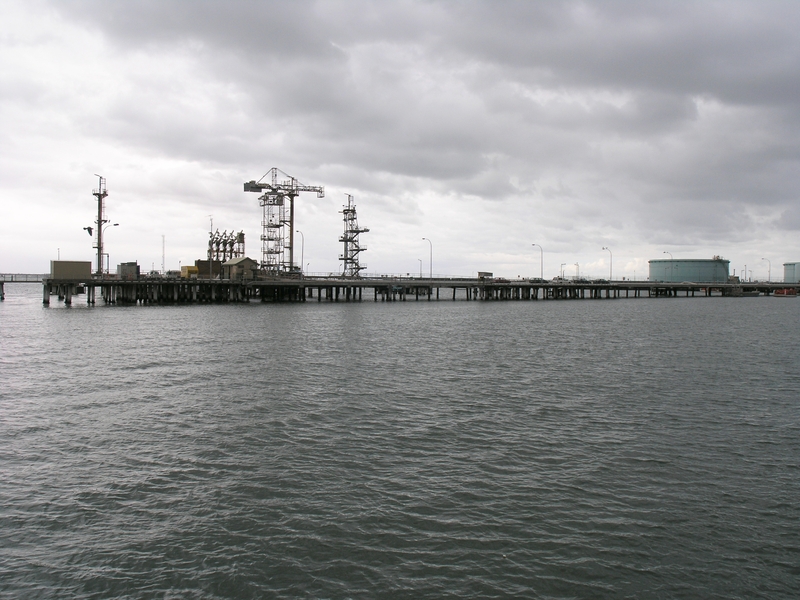 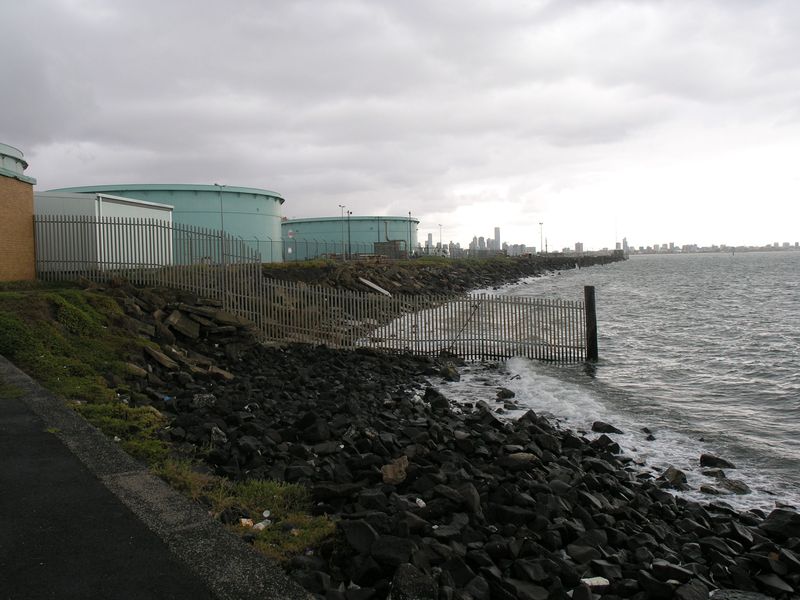 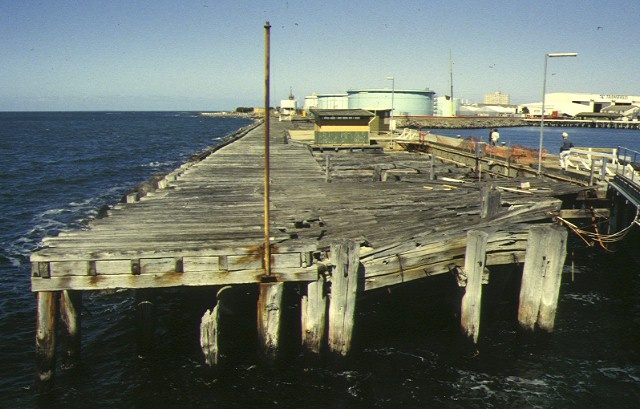 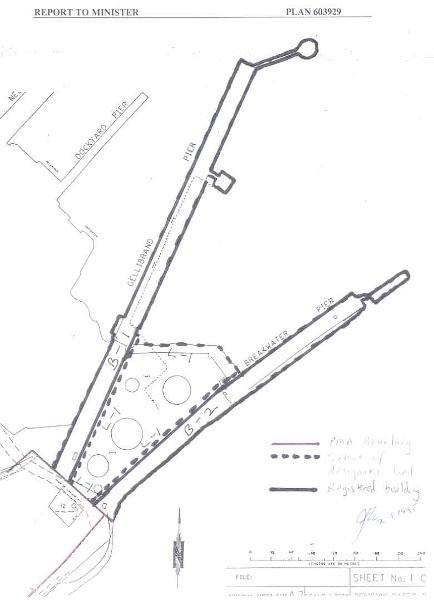 Breakwater Pier was constructed as a timber breakwater with an embanked approach from 1859 to 1861 by contractors McKay and McDonald. The Pier, which incorporated an earlier (1857) octagonal tide gauge house, was constructed over an existing stone pier which had been built by convicts in 1852-53. The pier structure was designed as a two level structure on the landward end to allow access to the tide gauge house on one level with the railway on the other level. The seaward end of the pier was of uniform height. The docking area was on the sheltered western side with ships using a series of sawtooth berths. The side of the pier was straightened in the 1880s and it was lengthened in 1933-34. The pier was remodelled in 1954 to take tankers, at which time the tide gauge house relocated to Commonwealth Reserve, Williamstown.

The Gellibrand Railway Pier was constructed between 1854 and 1859 by the Melbourne Mount Alexander and Murray River Railway Company. The first stage of the work, undertaken by contractors Musson and Bourne, involved the construction of a solid embankment, some 244 metres long, into the bay, part of which is now covered by the approaches of the existing pier. In 1857 contractors Evans Merry & Co built a 183 metre timber extension. The original two major wings on each side of the Pier were altered and extended until their removal sometime between the early 1880s and 1894. The Pier was remodelled and extended in 1963 to take tankers.

Breakwater Pier and Gellibrand Pier have historic significance to the State of Victoria.

* Breakwater Pier, with the modifications that have taken place over time, demonstrates the changing functions and uses of the site from its original purpose as a convict jetty, to a timber breakwater, to the site for the tide gauge house, to a railway pier playing an important role in the wool and grain trade and to its current role in handling exports and imports for the oil and petrochemical industry in Victoria.

*Gellibrand Pier, with the alterations and extensions that have taken place through its history, demonstrates the changing functions and uses of the pier from its original purpose as an important element of the Melbourne to Williamstown railway line and its role in the grain and wool trade to its current role in handling the exports and imports of the oil and petrochemical industry of Victoria.

* Breakwater Pier, along with Gellibrand Pier, has an association with Point Gellibrand. Both structures had a major impact on the success and prominence of the Point in the early maritime history of Victoria.

* Breakwater Pier, thought to include the original convict jetty in its structure, has an association with the prison hulks moored off Point Gellibrand between the 1850s until the 1880s. These hulks played an important role in the early history of the prison system. This was the first jetty to be constructed at Point Gellibrand and possibly one of the first structures to be built by the convicts.

Together with the Gellibrand Pier, Breakwater Pier is associated with the economic growth of Victoria. It played an important role as a grain and wool port from the 1850s until the 1930s.

The tank farm, located between Gellibrand and Breakwater Piers, has and association with the boat harbour at Point Gellibrand which was probably formed in the 1880s. It comprised curved stoned groynes constructed out from each of the piers to create a sheltered harbour. The area was land filled in the 1950s to make way for the construction of oil storage tanks and much of the early stone and earth embankments to the piers are now obscured.

The Gellibrand Railway Pier demonstrates an association with the economic growth of Victoria. The pier, one of the earliest major shipping piers on Hobsons Bay, was of great importance to the wool and grain trade. The pier was an important element in the Melbourne Williamstown railway line. This line facilitated the import and export of goods to and from ships in the bay. The remnant rail tracks on the Pier are important to an understanding of the history of the site.

The extensive use of dressed stone in the Pier is believed to be unique in Victoria and a contrast to later Australian practice in the construction of piers.

The importance of the Pier is heightened by the survival of part of its original structure. The most substantial visible part of the original structure is the dressed basalt retaining wall at the end, and to part of, the west side of the embankment. The basic layout of the railway tracks is original and some elements of the timber structure would seem to date from 1845.