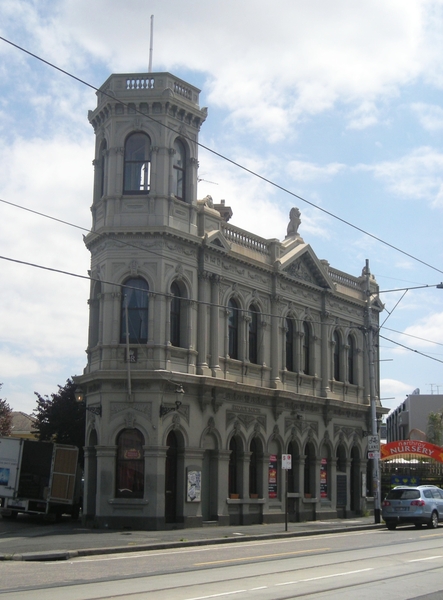 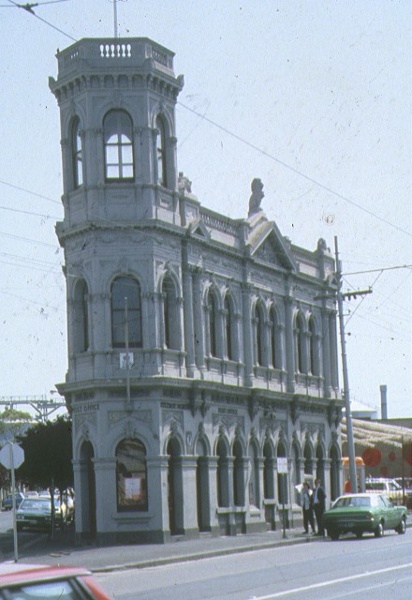 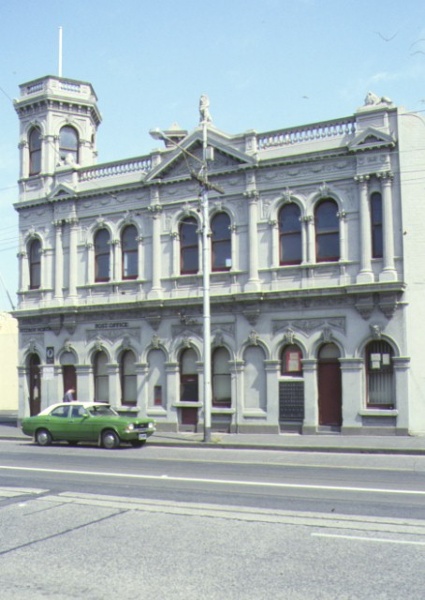 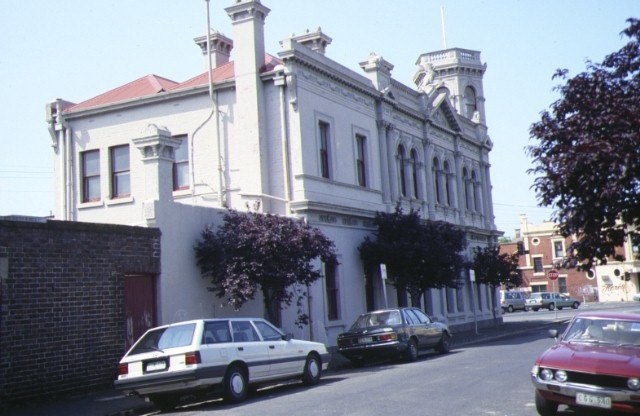 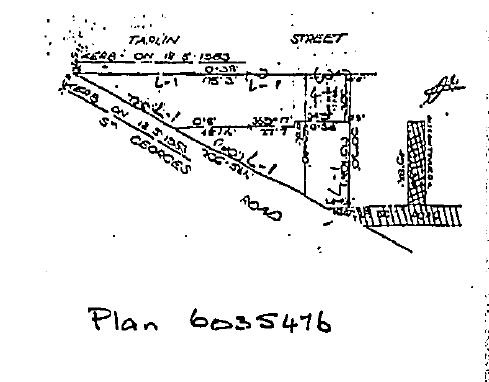 The Former North Fitzroy Post Office was built for real estate agent Thomas Rogers c 1886-1887 and served as a land office until 1890. From 1890 until 1907 it was owned by the Standard Building Society and used for a variety of purposes. In 1908 it was sold to the Post Master General and modified to become a post office. The two storey brick structure is situated on an acute angled site and has rendered, highly decorated facades. The apex of the building features a hexagonal tower, the dome of which has unfortunately been removed. The first floor has Corinthian half columns and arched windows. The entablature and balustraded parapet incorporate pediment motifs. External features include lion figures, floral scrolls and rosettes. The interior, although substantially altered in 1908, retains a number of decorative features.

The Former North Fitzroy Post Office is of architectural and historical significance to the State of Victoria.

The Former North Fitzroy Post Office is of architectural significance for its fine boom Classical style treatment of a corner site and for its demonstration of boom-period building techniques and technologies. The building is located on a prominent corner location, important for its original purpose as a land sale office, and the composition with corner tower and two identical flanking facades is a typical design solution for such allotments. Few examples of this composition survive today. The Former Post Office is significant for its largely intact exterior, which demonstrates the use of mass-produced decorative features that could be purchased ?off the shelf? and applied to a building in a variety of combinations. Similar features are also in evidence in the interior, although affected by the 1908 alterations. Perforated or hollow cornices in the ground floor public areas allow air flow to the outside, and are an important example of late 19th century building technology.

The Former North Fitzroy Post Office is of historical significance as evidence of the land speculation and building boom of the 1880s. The shape and location of the building were almost certainly intended as a form of advertisement for Rogers? land sale business, the prominent structure overlooking the streets and lanes where land was for sale. North Fitzroy underwent rapid expansion during the 1880s, with a population increase of almost 10,000; the building represents a substantial reminder of this period of growth and consolidation of Melbourne and Victoria.

The Former North Fitzroy Post Office is of historical significance for what it reveals about the development of the postal service in the early 20th century. The building featured a large residence for the postmaster/mistress, an interesting trace of the organisational and employment forms of the early 20th century. The development of new technologies in the early years of the 20th century was reflected in the incorporation of a telephone bureau in the 1908 alterations to the building.