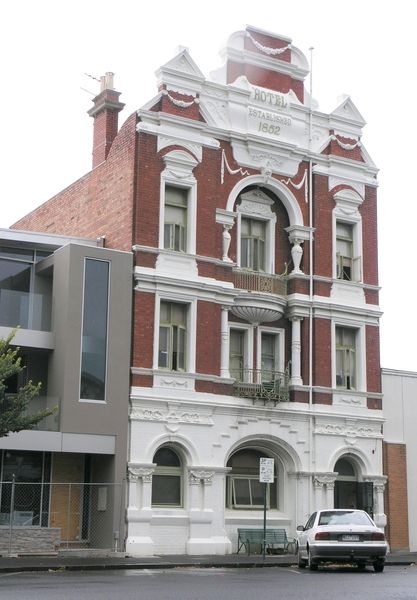 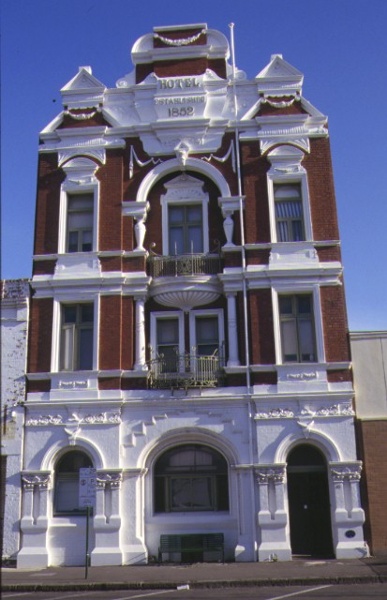 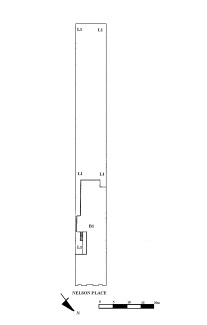 What is significant?
The former Royal Hotel was built in 1890 following the demolition of an earlier building on the site. Publican Thomas de Wardt had the new hotel built by Henry Hick to a design by architect T Anthoness. It was de-licensed early in the 20th century and has been used as a boarding house ever since. The three-storeyed, red brick and stucco building is designed in the Anglo-Dutch (Queen Anne) revival style. The highly mannered facade, characterised by Flemish gables and a central bay surmounted by a rectangular brick panel and adorned with a cement garland, features distinctive stucco ornament.

How is it significant?
The former Royal Hotel has architectural and historical significance to the state of Victoria.

Why is it significant?
The former Royal Hotel is of architectural significance as a highly mannered and early example of the Anglo-Dutch (Queen Anne) revival style in Victoria. This move towards the red brick idiom in response to developments in England represents a move away from the rendered Italianate expression favoured in Victoria for hotel design and a change in the characteristic corner location. The former Royal Hotel is one of the most richly ornamented and highly mannered examples of red brick hotels in Victoria. Noteworthy features include the elaborate and picturesque treatment of its parapeted gables; twin-arched doors flanking a wider arched bar window with coloured glass; stylised columns; carved scrolls, garlands and pilaster capitals with cherub faces; and elaborate, iron balconettes with Art Nouveau-inspired sunflower motifs. Much of the original internal fabric remains, although hotel elements such as bars have been removed. The original billiard room retains its patterned lantern roof and round, porthole-like windows which pivot open. Other original elements include architraves and the central stair, although the last flight has been altered.

The former Royal Hotel is of historical significance for its associations with the slum abolition movement of the 1930s. It was cited in the First Progress Report of the Housing Investigation and Slum Abolition Board in 1937 as one of the most notorious and squalid examples of a de-licensed hotel used for boarding-house accommodation. Built as superior hotel accommodation and described in the contemporary press as a splendid hotel and an ornament to the town, the building symbolises the rise and decline of a once grand hotel and demonstrates the fate of many de-licensed hotels.