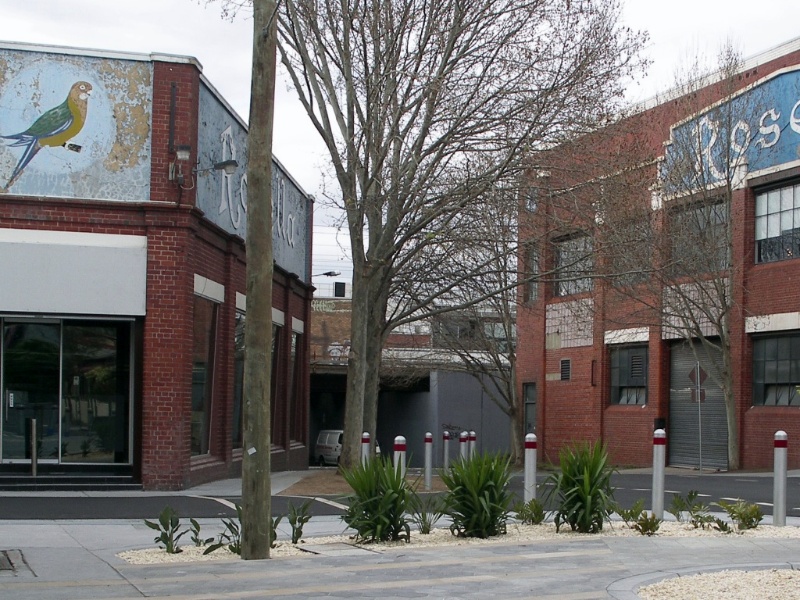 Other buildings and elements

What is significant?
The Rosella complex was established on the site of the former Cremorne Gardens at Balmain Street, Cremorne, in 1905. The Rosella Preserving Company, formed in 1895, was already well established when, in 1904, it acquired land once used for parking and stabling for the Cremorne Gardens for a new factory at Balmain Street. In 1902 the Company, operating from Kings Buildings Errol Street North Melbourne had won the only Gold medal presented at the Victorian Golden Jubilee Exhibition. As well as manufacturing the famous tomato sauce, many varieties of jams, canned fruits, sauces, chutney and candied peels under the 'Rosella' and Waratah' brands, the Company held agencies for Vinegar, Burns Cream, Gloss for Boots, Mortien, Phenole, Lanoline, Eagle Brand Blacking and matches.(105)

The new Rosella factory, designed by architect J.E. Burke and built in 1905 by the well known local builder Clements Langford. (106), had front walls of brick, factory of galvanised iron, iron chimney stack and brick floors grounded in cement (107). It was considered 'probably the largest factory of its kind in the Commonwealth' (108). The building is illustrated in a company letter head from the 1900s. 1920 saw the erection of a 3-storey building at the rear of the main factory (assumed Building No. 6), a new engineers shop, and a building for the lacquering of tin plate erected in the yard. Building 7 followed in 1922 and Building 2 rebuilt in c1924, Building 13 built in 1928, buildings 15 & part 18 soon after in 1928, Building 12 in 1935, and Building 1 in c1936-7. Most of Building 18 is thought to have been built c1960. Most of the extant buildings were built in the 1920s and 1930s. The complex was closed around the early 1980s and in 1983 the present refurbishment and reconstruction works were commenced, involving the extension of Palmer Parade north to Balmain Street.

- Face red brick walls, some with pilasters with corbelled cornices;
- Simple rectangular, one, two and three storey building forms but typically two storey scale originally;
- Parapeted rooflines with pitched roofs visible behind, some roofs being saw-tooth in profile;
- Punched window and door openings, with expressed rendered lintels, formerly with multi-paned glazing, some timber-framed, some steel framed;
- Use of significant parapet entablature Rosella business signs, in bas-relief;
- High streetscape qualities in Balmain St of the group, being buildings 1, 2 and 18, as enhanced by the visual relationship between these buildings, the street alignment and the railway bridge and elevated railway.

Buildings or elements
The following section provides the significant original aspects of each building that should be conserved. Known changes to the buildings are listed where visually related change may be possible in future development.

Original or early contributory fabric:
- Single-storey walls,
- Pressed red brick wall cladding,
- Street elevations divided into bays with brick pilasters,
- A sawtooth roof profile,
- A prominent cement rendered parapet which continues around the west and south elevations, including a splayed corner elevation,
- The lettering Rosella on all three parapets, in raised cement or painted, as on the south parapet, plus Rosella bird medallions or roundels on the parapets.

- The walls between the pilasters have been altered through the introduction of large openings and new window joinery,
- The south elevation has steel roller shutters over the openings, and
- The west elevation brickwork has been painted.

The north facade of the building has an important visual relationship to Building 18 and Building 1 (on the north side of Balmain Street), with the Rosella signs, in common, adding to the sense of unity within the former complex.

- The western Rosella medallion is a reproduction from the reconstruction of the upper section during the 1980s, (109).
- The facade has later infills to the spandrels and clinker bricks to some of the principle openings, one of which has been separated from the main building by the Palmer Place extension;
- Brickwork to the east elevation to the railway is over painted.
- The west side wall, erected at the time of the street extension is in tilt slab construction.

- Substantial three storey wall heights;
- Double gable roof form;
- Pressed red brick wall cladding;
- A steel frame;
- Pilastraded east elevations (18 north-south bays) overlooking the railway and facing Stephenson Street; and
- A parapet entablature having the words in large upper case letters reading 'The Rosella Preserving Coy. Ltd.' in raised cement to the northern half only, the southern (later?) portion being plain. The raised cement lettering to both east and west elevations is a significant reminder of the company's presence.

Buildings 6 & 7 make an important contribution to the Palmer Parade streetscape. They are also visually prominent and help to mark the location of the former Rosella complex when viewed from the distance, including from the east.

- The west facing window frames have been slightly enlarged and replaced in the majority of openings;
- An added small entry structure facing Palmer Parade;
-The brick spandrels have been bagged;
- The parapet "Rosella" sign has been removed from the south wall;
- An added lift overrun is also visible on the roof above the west elevation;
- The east facade has been over-painted with windows also replaced; and
- The south facade has been altered and over-painted.

- Red brick clad;
- Single storey and basement;
- Gabled roof form, with a continuous ridge lantern to the southern gable roofed section;
- Erected in two stages to form the one structure;
- Plain elevations, being relieved by the pattern of openings; and
- There are timber trusses and steel-framed windows along the south side.

With Building 13 to the north, it makes a contribution to the heritage character of this area of Gwynne Street.

Changes:
-Openings in the east elevation have been altered.

With Building 12, it makes a contribution to the heritage character of this area of Gwynne Street.

As a centrally located building in the former Rosella complex, Building 15 is a key uniting element in the Heritage Overlay Area.

Changes:
- The chimney stack was removed by Rosella;
- Brickwork partly over-painted on the east elevation.

Original or early contributory fabric:
- Large, two-storey form,
- Expressed concrete frame,
- Pressed red brick cladding, with stucco trim,
- A plain parapet to Balmain street and a shallow pitched gabled parapet on the west side,
- A narrow brick wall-bay at the east end of the north facade, as the original west end of the north facade of building 2 (now across Palmer Parade) with a cantilevered cement-rendered and gabled porch over a doorway, and the letters `Estb. 1895' in raised cement letters above the porch, a brick infilled panel above this, and a Rosella medallion on the parapet.

The north elevation of this building did not have a Balmain Street address at the time of its construction but in its present form, the building has a strong visual relationship with buildings 1 and 2, adding to the sense of unity within the former Rosella complex.

Changes:
- The east side of the building has been altered and over-painted, as has the ground level north elevation; and
- Recent windows on the west side and new openings and windows on the north side.

How is it significant?
This group of buildings has historic, aesthetic and social significance to the City of Yarra (NER criteria A4, E1, G1).

- For the long association with, and evocation of, the Rosella company and brand name, as celebrated on the buildings of the complex in words and pictures. The Rosella name and parrot symbol is demonstrably home-grown and sits with examples such as Swallow and Arial, Arnott's Biscuits, Vegemite, IXL Jam, Aeroplane Jelly, and the Akubra hat, in the pantheon of Australian brands that have been household names throughout most of the twentieth century. This significance is demonstrated both by the extent of the building complex and the signage which resonates in the minds of shoppers today, denoting a familiar manufacturer of food products for over a century, and tells us 'this was the home of Rosella when it was at its peak;

- As part of an iconic group of local industrial complexes, including Bryant and May, the Union Brewery and the Cremorne Brewery, that collectively established the historic identity of Richmond and, in this case, the Cremorne area, as a nineteenth and early twentieth century industrial working class suburb.

- As an example of use of raised cement ornamental parapet signs to promote the presence of industries in their locale, a past practice, made virtually obsolete by the Second World War and typically replaced today by illuminated signs. The Rosella complex makes a key contribution to Richmond's collection of significant industrial signs which includes signs at Bryant & May, AKM, Kayser and Pelaco;

- As a demonstration of the contemporary approach to the location of industrial development in the inner suburbs where successful manufacturing was dependent on workers residing locally or on tram and rail access routes for employees, materials and markets;

- For the distinctive juxtaposition of the buildings, especially in Balmain Street and along the multiple track railway, between Richmond and South Yarra (raised in 1899), evoking rapidly vanishing images of nineteenth and early twentieth century industry in the metropolis;

- For the key visual relationship between Buildings 1, 2 and 18, the curving form of Balmain St and the railway bridge across Balmain Street, as especially critical to the resultant space defined by the Rosella complex, together with the distant glimpses of other industrial premises including the Bryant and May tower.