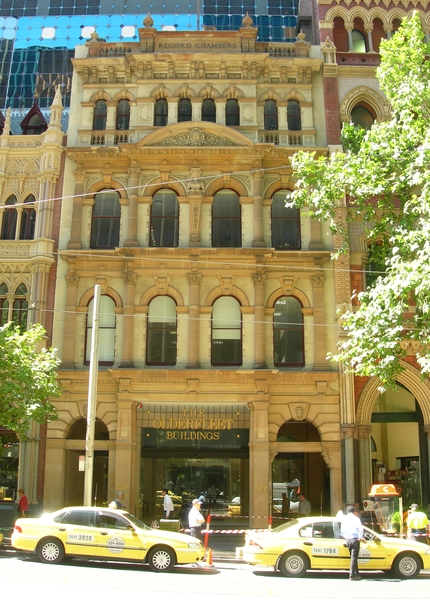 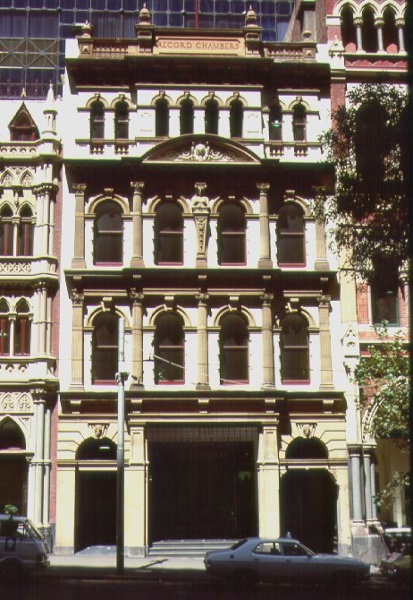 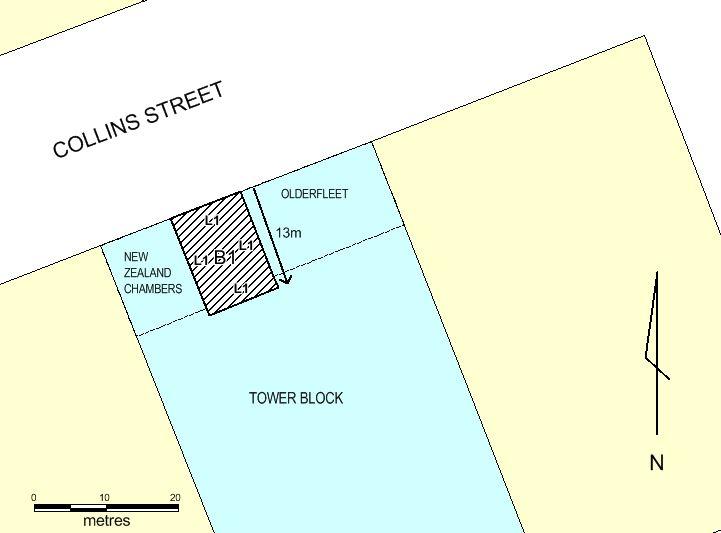 The retained front section of the Record Chambers building comprising the facade to Collins Street, and returning to a depth of approximately 12 metres and including the iron gate which gave access to the laneway leading to the rear.

The printing and publishing firm of McCarron, Bird & Co. was established in 1872 in Flinders Lane west. Among their early publications was the Australasian Insurance and Banking Record, founded in 1876. The Record, which later gave its name to the Record Chambers building, was pre-eminent amongst insurance and banking journals in Australia. Other publications by the company included Alexander Sutherland's Victoria and Its Metropolis (1888), and numerous journals, including Australasian Trade Review, Manufacturer's Journal, Australian Brewers' Journal, and Temperance News. In 1887 the partnership moved to their own purpose built premises, the Record Chambers building, designed by J A B Koch and built by G B Leith of Flemington. Koch was from Germany and many of his designs betray German Baroque roots. The new premises were constructed during the building boom of the 1880s, which transformed this part of the city from one of small warehouses in close proximity to the wharves, to one of commercial and mercantile activity. The printing works incorporated lithography, engraving and bookbinding. The ground floor served as a retail stationary shop. The Record Chambers was threatened with demolition in the late 1960s, but as a consequence of heritage legislation, the front part of the building was retained in the 1984 redevelopment.

The Collins Street facade of the Record Chambers building retains the original ground floor arrangement of two entrances (one pedestrian, one vehicular) flanking a large shop window, although the window has been replaced by an entrance lobby. The iron gate, which gave access to the laneway leading to the rear, is now fixed in an open position.

The facade, which is the most significant part of the building, is an expression of free classicism. It is arranged as four bays, the central two projecting slightly towards the street. Engaged columns and pilasters define each bay. A caryatid terminus (half-female figure on a pedestal) takes the place of the central column on the second storey. The four large arched windows to the first and second storeys contrast to the eight smaller windows on the third storey. A prominent cornice and a segmental pediment crown the second storey. The top of the building is decorated with a bracketed cornice, with balustraded parapet and four urns. The words 'Record Chambers' are inscribed in the centre balustrade.

Internally the building has a depth of approximately eleven metres, which is all that survives following redevelopment at the rear. Exposed timber roof trusses and a tongue and grooved lining board ceiling survive in the top floor, though the ceiling linings are concealed behind modern finishes.

The Record Chambers building is of architectural and historical significance to the State of Victoria.

The Record Chambers is also historically significant for its association with the burgeoning heritage movement of the 1970s, in particular the campaign to save the Gothic streetscape of Collins Street by the National Trust. This campaign and the public concern and development in the city led to the introduction of the Victorian heritage legislation. [Criterion A]

The Record Chambers building is architecturally significant as an early expression of a city building in the so-called boom style. The free and animated use of classical elements demonstrates the growing architectural exuberance of owners and architects during the boom period of the late 1880s. [Criterion D]