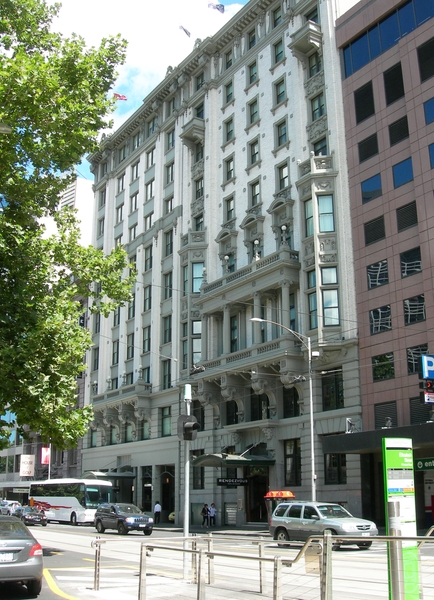 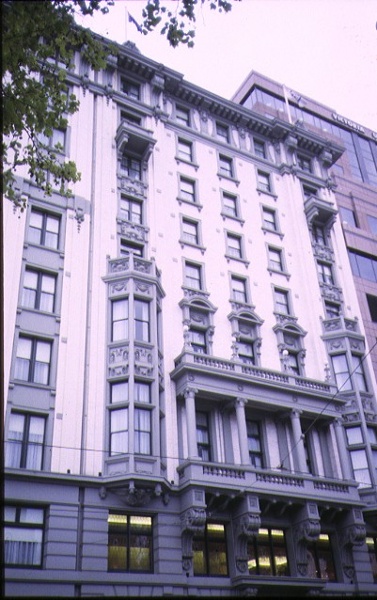 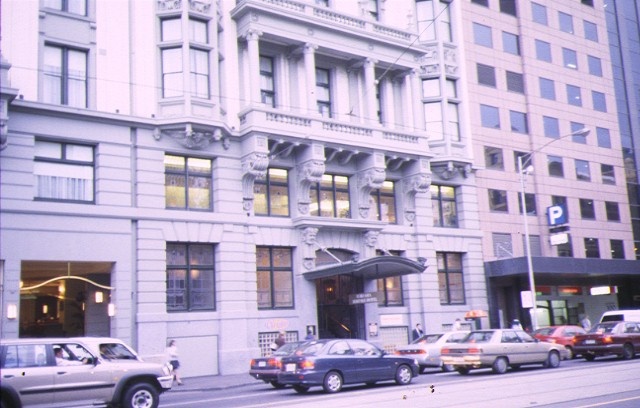 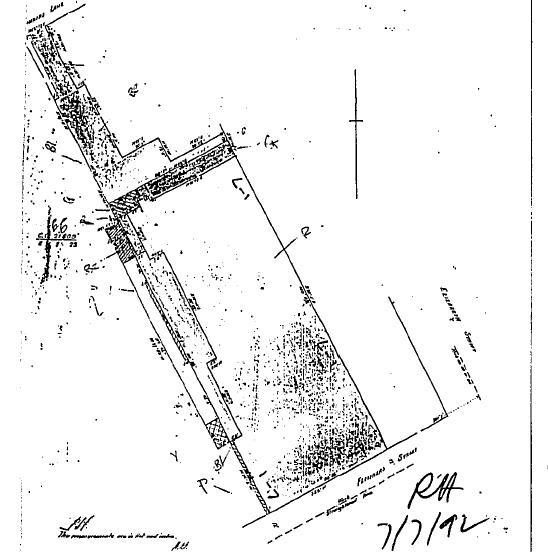 The Commercial Travellers Association Building was designed by Harry Tompkins in 1912 and completed in 1913. It comprises a basement and nine storeys. The ground floor is faced with granite to a height of approximately 2.5 metres. The facade above is partially rendered and partially faced with cream glazed bricks. The rendered areas are treated in an ornate fashion, with exaggerated classical detailing including foliated swags, medallions and cartouches. Of particular note are the rustication of the ground and first floors and the colonnade of the second or piano nobile, which is supported on massive, oversized consoles. Consoles also support the cornice surmounting the facade. Oriel windows rise through the second and third floors and are topped with balconettes. There are also balconettes on the eighth floor. Leadlight is featured in some of the windows, mainly at the lower levels. The building is an early example of steel-framed construction, with reinforced concrete floors and a combination of terra cotta lumber and cement slab for non-structural internal walls. The building ceased functioning as the Commercial Travellers Association club in 1976 and fell into disrepair before being restored as a hotel in the late 1990s.

The Commercial Travellers Association Building is of architectural and historical significance to the State of Victoria.

The Commercial Travellers Association Building is of architectural significance as one of the finest and most distinct expressions of the Edwardian Baroque style in Melbourne. This grand classical non-domestic style, featuring a combination of Beaux Arts Classicism with a revival of English Baroque sources, was adopted as the style of choice for department stores and large commercial establishments in Melbourne in the first two decades of the 20th century. It was thus an eminently suitable style for the headquarters of the roving disciples of commerce, the Commercial Travellers Association. The building was the winning entry in a competition organised by the Association and judged by the well-respected Percy Oakden, an indication of the high regard in which the building was held by Tompkins' architect peers.

The Commercial Travellers Association Building is of architectural significance for a number of innovations, such as the use of welded wire reinforcing mesh, perhaps the first use of such material in Victoria, and 'Mack' slab cement partitions, the only known use of this technology in Victoria. It was also one of Australia's earliest steel framed buildings. Perhaps most notable was the use of cream glazed bricks, an unusual feature used to combat discolouration caused by pollution from the street and nearby railway yards. The building also boasted equipment such as a built-in vacuum cleaning plant, electrically heated service lifts, potato peeling machines, telephones in each room, a dish washing machine and large electric toaster. The building was also the tallest in Melbourne until the construction of the Manchester Unity, completed in 1932, and the first to be constrained to the new city height limit of 132 feet.

The Commercial Travellers Association Building is of architectural significance as one of the most impressive works of Harry Tompkins. Tompkins was one of Melbourne's best commercial architects during the first three decades of the 20th century. He had a long relationship with the Commercial Travellers Association and also with Sydney Myer, for whom he designed the first Myer building. Tompkins served two terms as President of the Royal Victorian Institute of Architects between 1914 and 1916, a reflection of his esteemed position in the architectural profession. Other well-known buildings for which he was responsible include Dimmeys Model Stores in Richmond and the Centreway Arcade in Collins Street.

The Commercial Travellers Association Building is of historical significance as evidence of the once important role played by commercial travellers in the commercial and social development of the State. In the late 19th century and early 20th century commercial travellers were a common site on the State's railways and roads, as they traversed the countryside displaying their wares. The Commercial Travellers Association of Victoria was formed in 1880 to seek improved working conditions, better hotels and higher quality roads for travelling salesmen. The substantial character of this building demonstrates the prominent role of commercial travellers at a time of relatively rudimentary communication, transport and distribution networks. It is also a reminder of Flinders Street's now-lost status as one of the city's major commercial thoroughfares. The building's proximity to Flinders Street Station reflected the reliance of the travellers on the rail network.