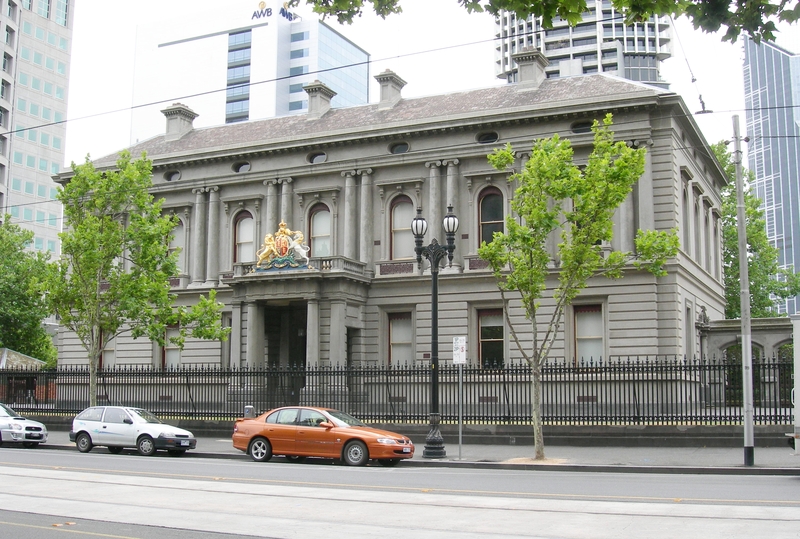 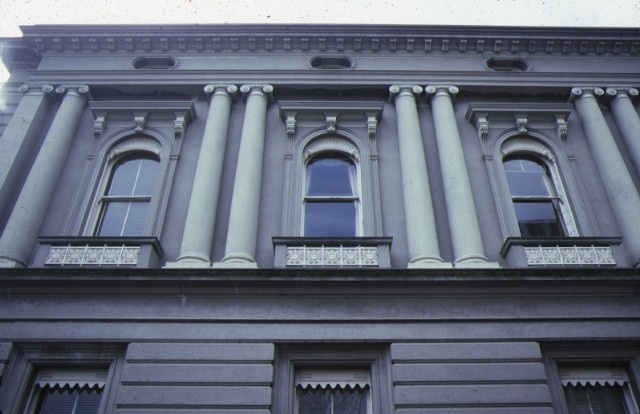 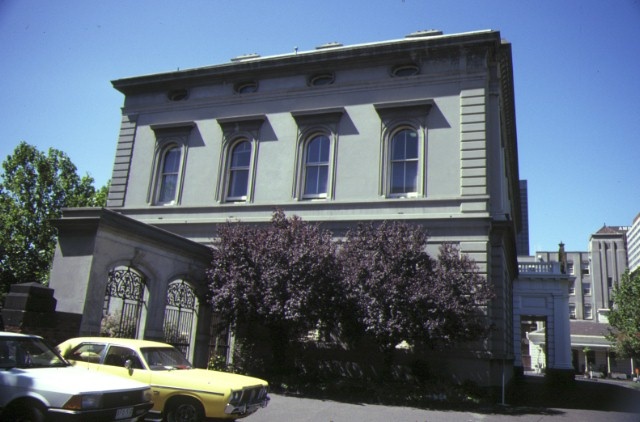 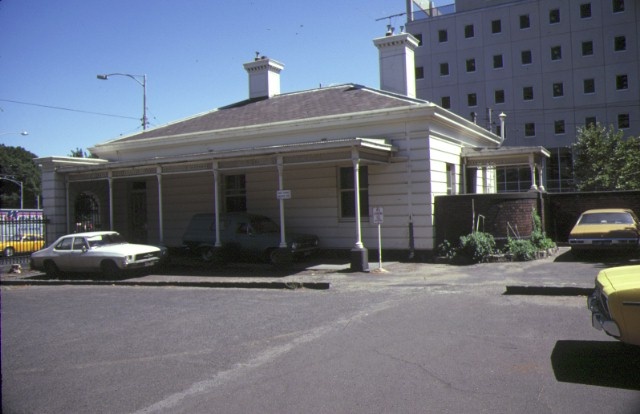 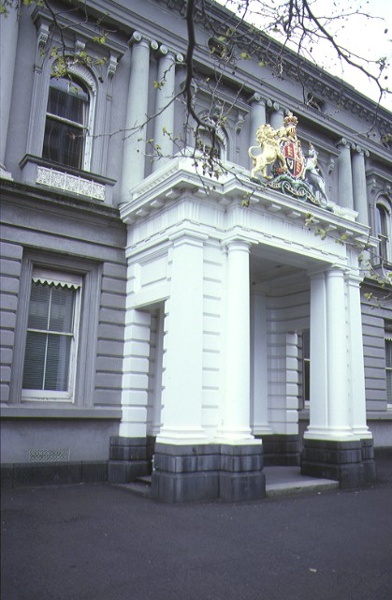 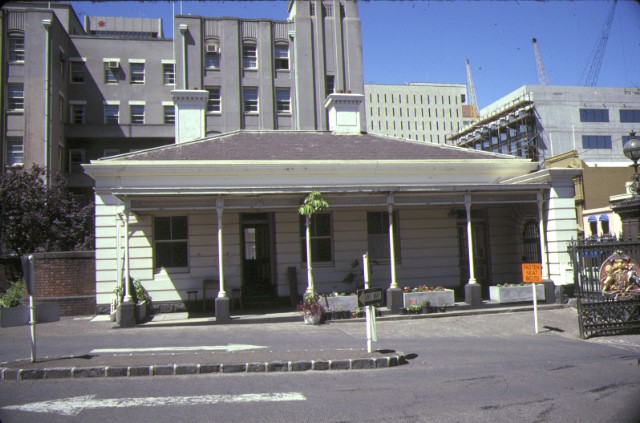 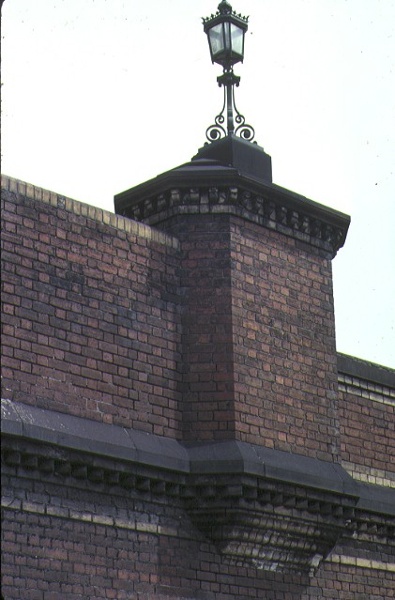 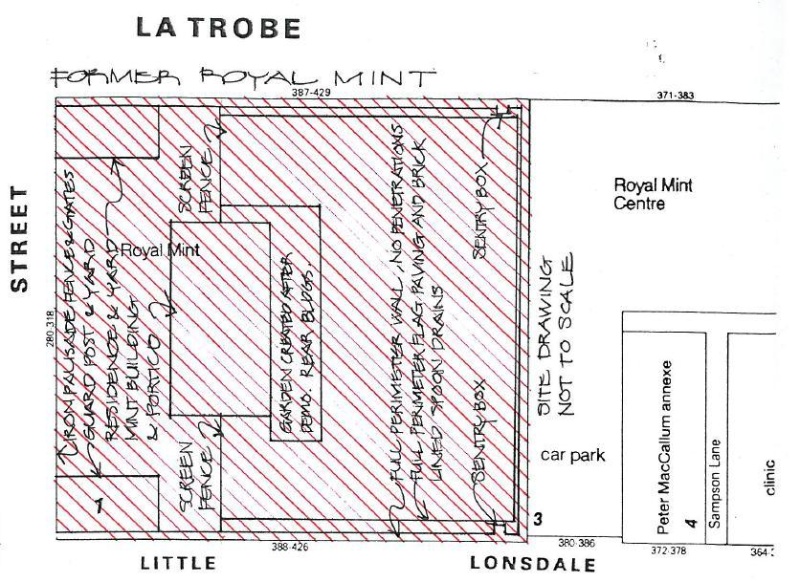 The Former Royal Mint was designed by John James Clark of the Public Works Office. Design work began in 1869 and it was built during 1871-72 by the contractors William Murray and Company of Emerald Hill, and Martin and Peacock of West Melbourne. The complex originally contained coin production facilities, administration and residential quarters and associated structures, but all that remains now are the two-storey office building and residence, two gate-houses, perimeter walling and palisading. The main two storey building is a rendered brick structure on a heavy rusticated base. Unlike the Palladian norm, the piano nobile is on the ground floor. The first floor features paired ionic columns, while an attic storey features oval windows. The perimeter wall is an imposing brick construction with large wrought iron gates and iron lamps.

The Former Royal Mint is of historical and architectural significance to the State of Victoria.

The Former Royal Mint is of historical significance because of its important role in the economic, financial and political development of Victoria for nearly 100 years. Lobbying for a mint to be established in Australia began soon after the discovery of gold. Such an institution was considered by its proponents not only as an efficient way of providing currency for the colonies, but as an important sign of colonial independence and maturity. As such it reflects the growing wealth and confidence of gold-rush era Melbourne. As a branch of the Royal Mint, London, it initially bought gold and minted only gold sovereigns until 1916. The first Australian silver coins were minted in 1916, after the Federal Constitution gave the Commonwealth sole powers in the minting of coinage. The first Australian pennies and halfpennies were produced in 1927. When the Sydney Mint closed in 1926, the Melbourne Royal Mint became the only mint in Australia until it ceased operations in 1968.

The Former Royal Mint is of architectural significance as one of the most impressive 19th century government buildings in Victoria, and for its associations with John James Clark.

The administration building was styled after Raphael's Palazzo Vidoni-Caffarelli in Rome (1515). Its restrained ornamentation and dignified portico reflect the prestigious yet functional nature of the Mint. It is one of the finest examples of conservative classicism in Australia. Clark (1838-1915), who had a distinguished career in the office of the Colonial Architect (later Public Works Department) from 1852, when he was 14, until 1878, was responsible for designing a number of important colonial government buildings including the Government Printing Office (1856) and the Treasury (1857). He later went on to design major buildings in Sydney, Brisbane and Perth.