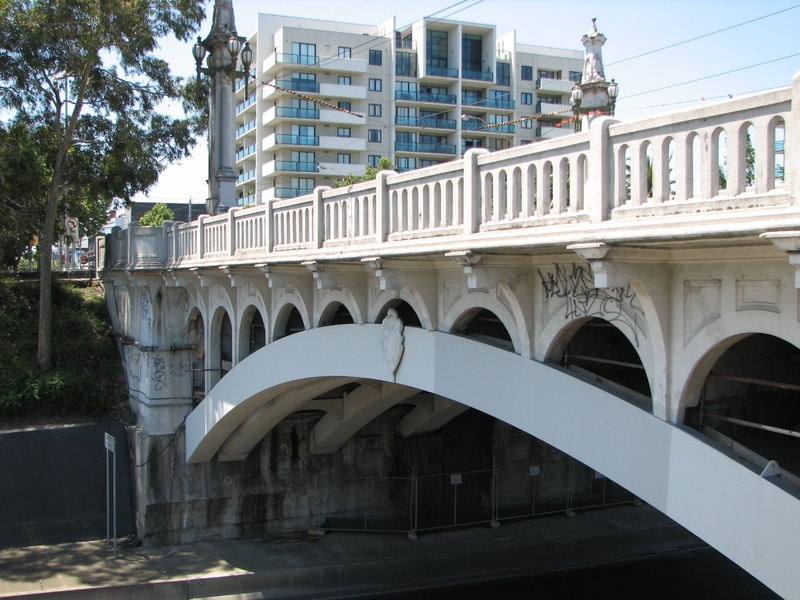 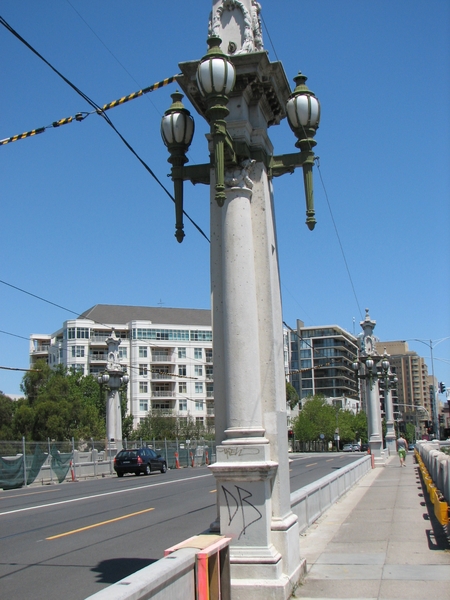 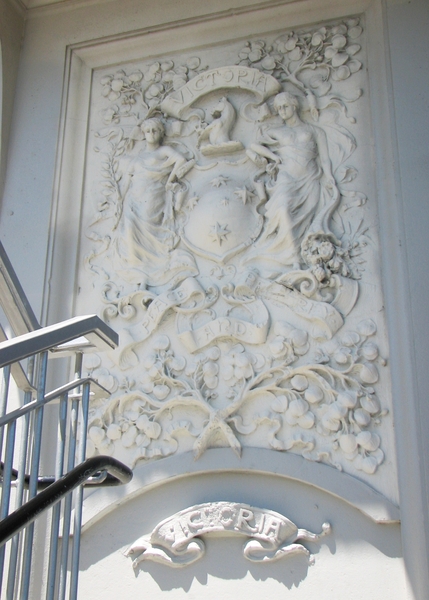 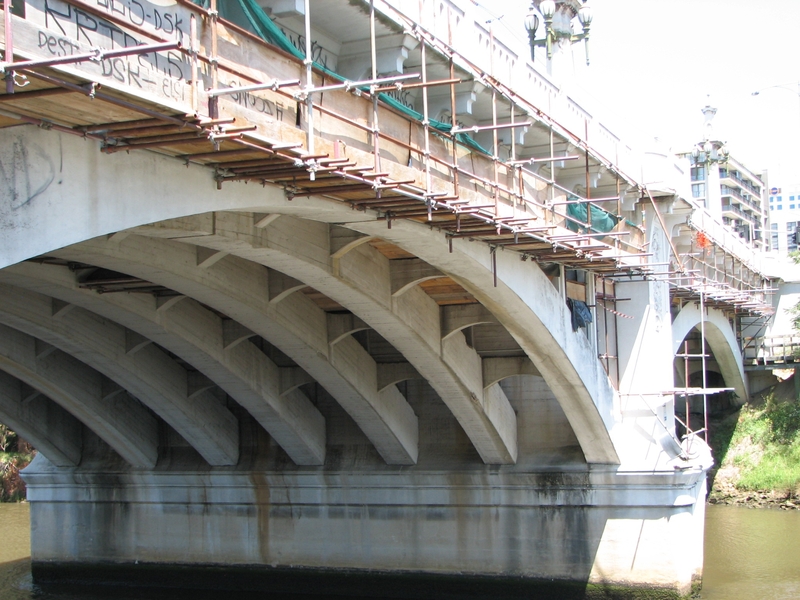 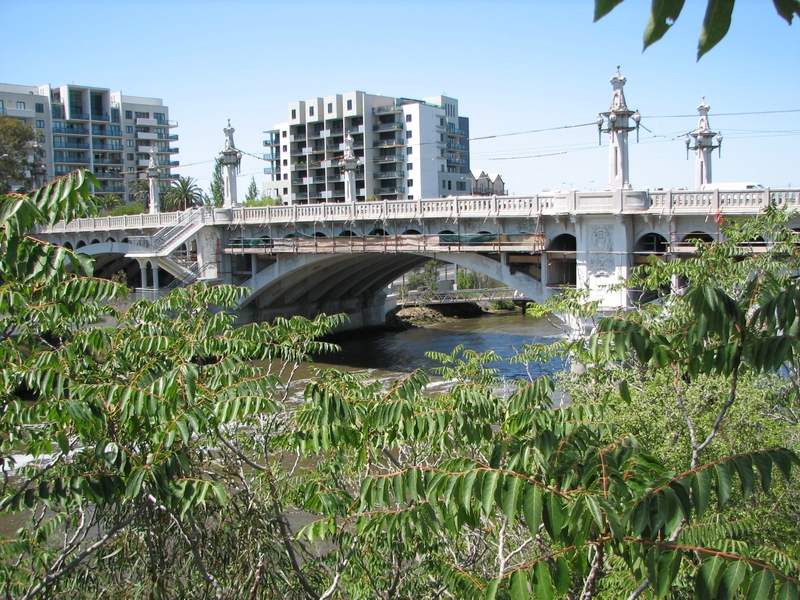 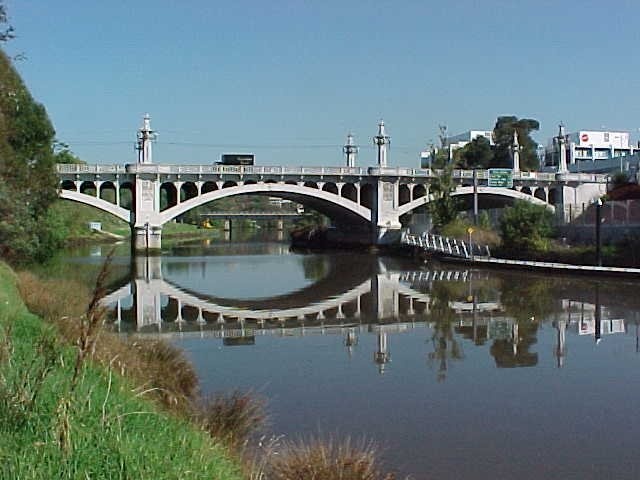 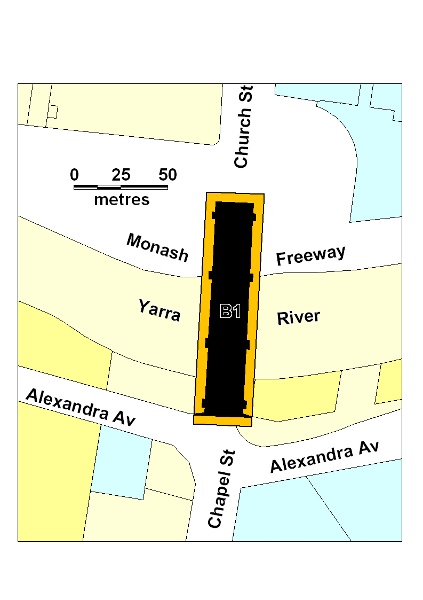 What is significant?
The Church Street Bridge, completed in 1924, is one of the five major metropolitan bridges over the Yarra River. The crossing between Chapel Street and Church Street was negotiated by punt until a narrow single span iron box-girder bridge was erected in the 1850s. By the early twentieth century the bridge was inadequate in terms of structure and traffic capacity, and furthermore an upgrade was needed to provide a tramway connection across the river. The Prahran, Richmond and Melbourne Councils, the Tramway Board and the State government each agreed to contribute to the cost and an Act of Parliament was passed in 1919 to enable the Prahran and Richmond Councils to construct a new bridge.

The new bridge was to be 66 feet (20.1m) wide with a 44 foot (13.4m) carriageway and two 11 foot (3.4m) footpaths. The waterway was to be 300 feet (91.5m) wide to accommodate the reappraisal of flood levels in a contemporary Yarra Floods Board report. A three arch design was called for, following the lead of the earlier Princes Bridge. A competition for a design for the bridge was won by Harold Desbrowe-Annear and engineers J.M. Ashworth and A.lL. Galbraith. The architects Harold Desbrowe Annear and Thomas Ramsden Ashworth and engineer John Albert Laing (who had also made an entry in the competition) in conjunction, were commissioned to design a bridge based on the winning entry, but adapted to the requirements of the competition adjudicators . The bridge was constructed by the Reinforced Concrete and Monier Pipe Construction Company. The bridge was opened by the Governor, the Earl of Stradbroke, on 8 July 1924.

The Church Street Bridge has three spans of ribbed arches, with the central span slightly wider for visual balance. The pier bases are brought up to large moulding below the arch springing level and are formed into prow-like cutwaters. The piers above are formed into pilasters on the outside with the panel between displaying large coats of arms in low relief. The coats of arms of Victoria and Melbourne remain on the piers. The coats of arms of the Cities of Prahran and Richmond which originally graced the faces of the abutments have been removed.

Slender cross walls in the open spandrels carry the load of the roadway deck to the arch ribs. Concrete arches link the crosswalls at the sides of the bridge. The ends of the cross walls are formed into brackets to support the walkway and balustrades above. Above each of the piers and abutments are lamp standards, which also support the overhead tramway power supply. Engaged Ionic columns either side of a square column are topped by an entablature and a finial decorated with wreaths. An elaborate metal mounting holds four torch-like lamps. Plaques referring to the opening of the bridge are fixed to the roadway sides of the outer standards. The arches of northern span were rebuilt in the late 1990s with a higher springing point and in new material to accommodate road widening for the Monash Freeway.

How is it significant?
The Church Street Bridge is of historical and architectural significance to the State of Victoria.

Why is it significant?
The Church Street Bridge is of historical significance as one of the major metropolitan bridges and as a major crossing of the Yarra River. The bridge committee insisted upon a substantial, beautiful and permanent structure that would be an investment in the future, against the government push for a frugal project. The Bridge was seen as having an important functional role in linking the two densely populated inner suburbs, and this is reflected in the design of the concrete structure to give greater than normal load carrying capacity. But equally the bridge was credited with a civic role in promoting the beautification of the city, particularly as it spanned a polluted river in the midst of the industrial back yards of Richmond and Prahran. Melbourne already boasted a considerable architectural legacy. The use of classical forms and ornament, symbolising a relationship to a glorious past, was seen as appropriate for what was expected to become one of the busy thoroughfares of a great city.

The Church Street Bridge is of architectural significance as a fine example of the application to a reinforced concrete bridge structure of a classically inspired decorative treatment. The technology of steel reinforced concrete construction was clearly expressed in the separate ribs of the main spans and the open spandrel above, clearly distinguishing it from a bridge of traditional masonry construction. However, through composition, proportioning and ornamental treatment in a grand, if sparse, classically inspired manner the bridge gained a processional quality and symbolic importance as major urban river crossing.

The Church Street Bridge is of architectural significance as an example of a large institutional work by important Melbourne architects Harold Desbrowe Annear and TR Ashworth. Annear was involved in town planning issues and espoused the principles of the City Beautiful. He published a City Beautiful inspired planning proposal for South Melbourne. The Church Street Bridge is the only remaining built expression of Annear's interest in this field.