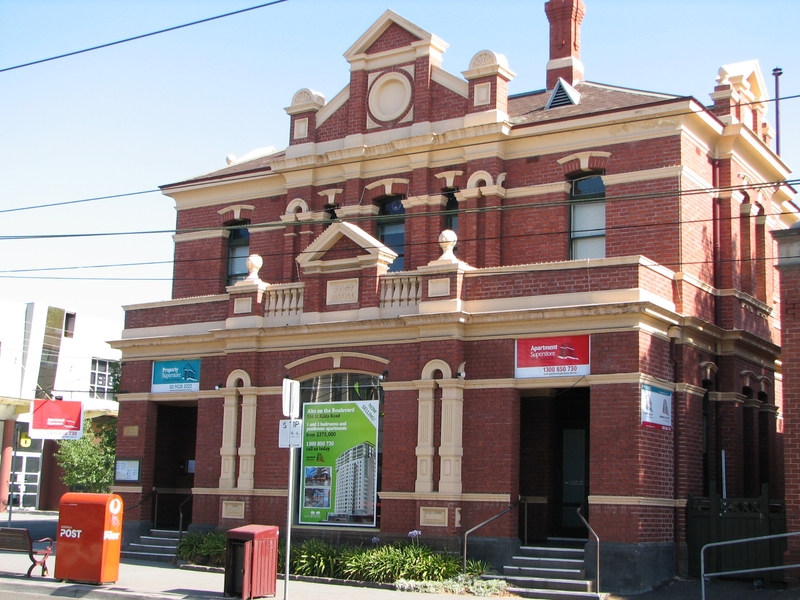 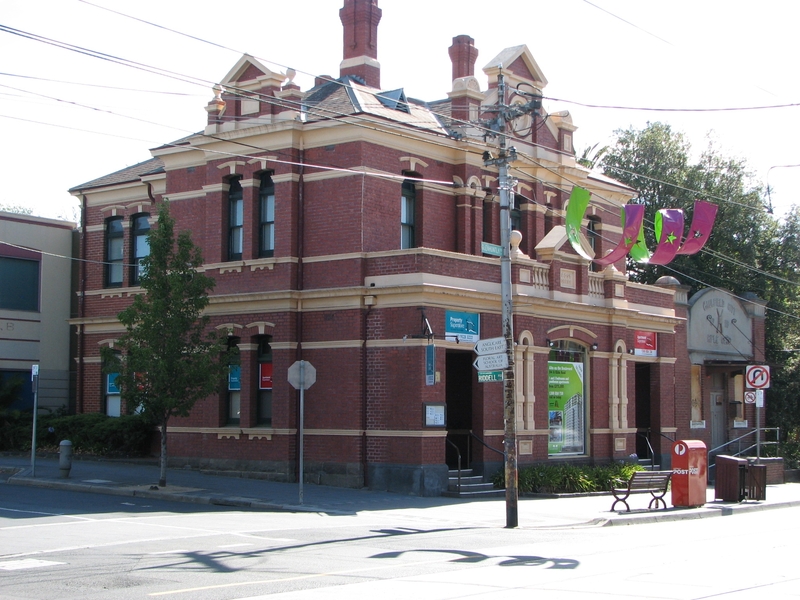 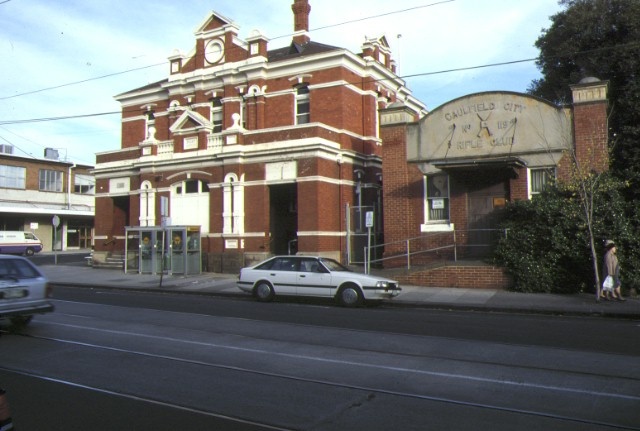 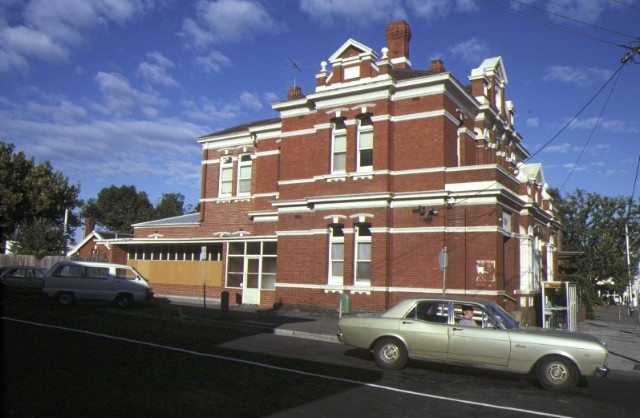 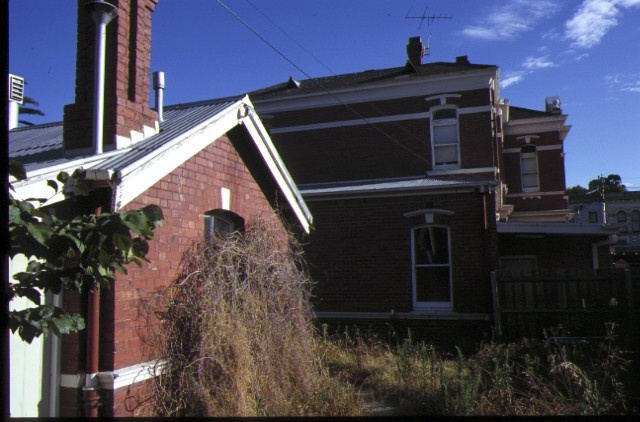 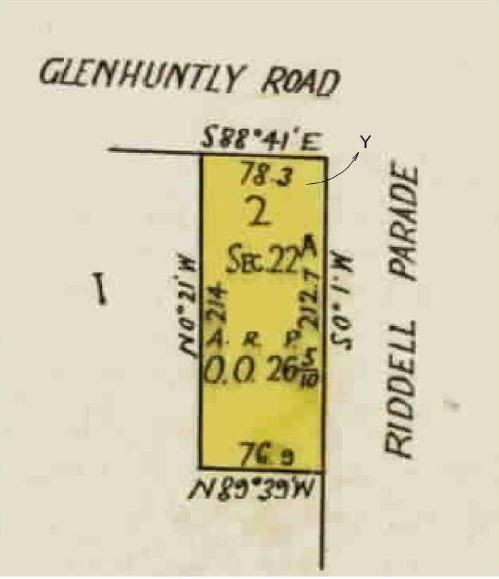 The Elsternwick Post Office was built in 1891 to the design of the Public Works Department under JH Marsden. The builder was Herbert H. Coulson. The office, complete with postmaster's quarters, was a substantial two storey red brick building set on a bluestone plinth with an ornate facade incorporating cement dressings. The Elsternwick Post Office complex originally included a public lobby mail, lobby, telegraph and sorting offices, hall, dining hall, kitchen and stores, all on the ground floor. The first floor consisted of two bedrooms, sitting room, servants' room, bathroom and landing.

Since 1891 it has presented an imposing facade to Glenhuntly road and Riddell parade, on the corner of which it stands. Immediately adjacent on the other side, but also facing Glenhuntly Road, is a small single storey structure, the Rifle Club building. The two buildings are surrounded on the two remaining sides by an open space reserve. The Elsternwick Post Office is an early, and substantially intact, example of the English "Queen Anne" style which was introduced to Australia c.1885, and first seen in a fully developed form in Victoria in the Queenscliff Post Office of that year. Together with the Queenscliff Post Office, Kew Post Office, Courthouse and Police Station, and selected schools such as that at High Street, Prahran, the Post Office represents a notable stylistic innovation in Victoria architecture on the part of the Public Works Department.

The style imported from England was characterised by a predominance of red brick, with dressings of stone or stucco, and by steep proportions with dominant roofs incorporating hipped and gabled forms as well as dormers, tall chimneys and, occasionally, towers. Most of the details as well as the often picturesque roofscapes were derived from the Renaissance architecture of northern Europe and, in particular, England. Other common features of English "Queen Anne" designs include the use of coved cornices at eaves level, the articulation of the facade by means of pilasters, and the preference for tall narrow multi-paned windows with white painted sashes, and carved brick aprons under the sills. The Australian style of "Queen Anne" developed out of the English. For many years it was referred to as "Queen Anne", but some examples (especially of domestic architecture) are now known as "Federation Style".

"Queen Anne" also has its American variants. The term English "Queen Anne" may be used to distinguish it from later Australian and American versions. The inverted commas indicate that this is not the real architecture of Queen Anne’s reign.

Examples of the buildings influenced by English "Queen Anne" style began to appear in a period of considerable building activity in the late 1880s. Whereas many of the comparable commercial examples of this style have been destroyed, mutilated or painted over some Public Works Department designs have survived, and, with the regrettable exception of Queenscliff, have maintained their red brick character. The Post Office at Elsternwick is significant in this, not only in its own right, and as part of a group of important buildings, but also as a visible representation of the Queenscliff design in a relatively unspoiled form. At Elsternwick the design has been maintained overall and, where extended, this has been done sympathetically (an exception to this is the post office boxes facing Riddell parade). In developing this, and other distinctive new designs, the architects of the Public Works Department in the late 1880s and 1890s were breaking new ground, not only in Victoria but also on a national basis. This was all the more remarkable when it is considered that government departments were not previously known for their commitment to, and encouragement of, innovation.

The building may also be regarded as important to the Elsternwick community, and expressive of the history of the district. Settlement in the area followed two land surveys, one by Robert Hoddle in 1851 and the other by Henry Foot in 1856. A prominent early settler was Charles Hodson Ebden, a pastoralist who in 1851 became Auditor-General of Victoria. He named his property "Elster", which is German for magpie, and "wick" (meaning village) was added in later years. The coming of the railway in 1859, which passed through Elsternwick en route to Brighton, made for a settlement around the station, and this encouraged the introduction of postal services. However, development of Elsternwick was blocked by several surrounding large properties, and it was not until the boom decade of the 1880s that it really
began to go ahead as a commercial and residential centre. From the mid 1880s the new community agitated for secession from Caulfield shire, and for a new post office building more in keeping with the aspiration of a developing suburban district. This agitation was successful. In 1890 land was exchanged with the railway department, with a view to building an office on a suitable site, and tenders were called for in August.

The importance of the new building can be seen in its location adjacent to what was then the focal point of the district, the railway station. With the new building also came an extended postal district for Elsternwick, taking in additional portions of St Kilda and Caulfield. The new building also comprised residential quarters and a new postmistress, Mary Kate Oldham, was appointed in the same year the office was built.