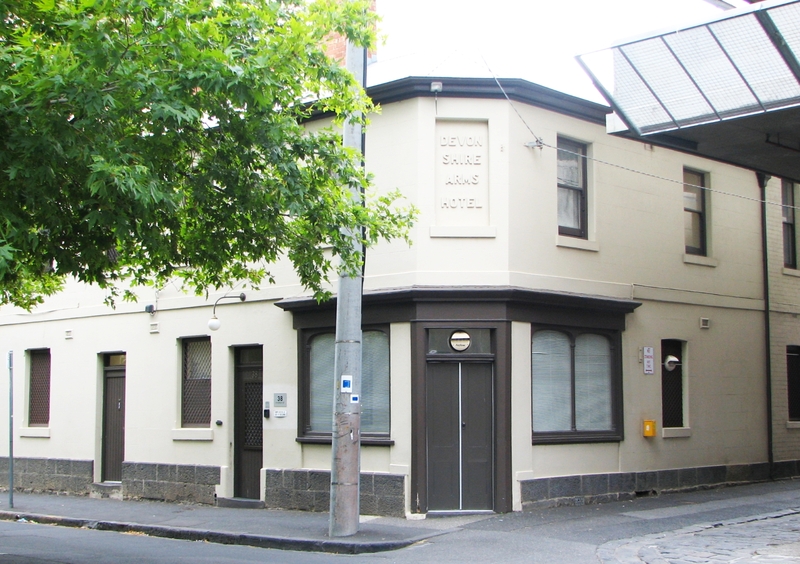 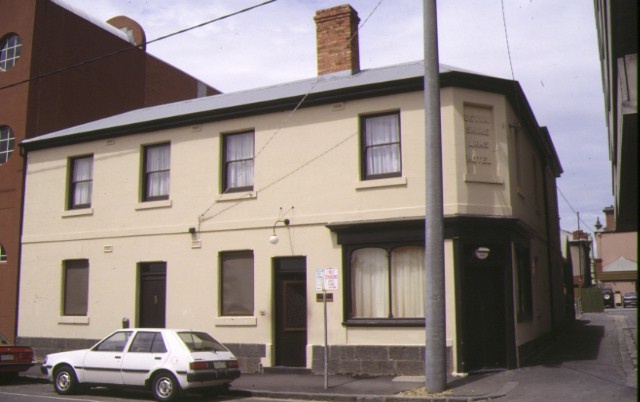 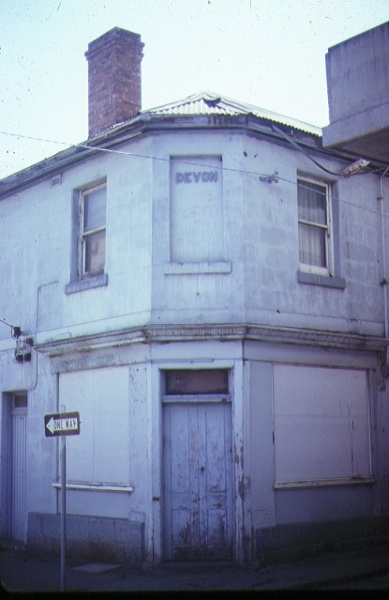 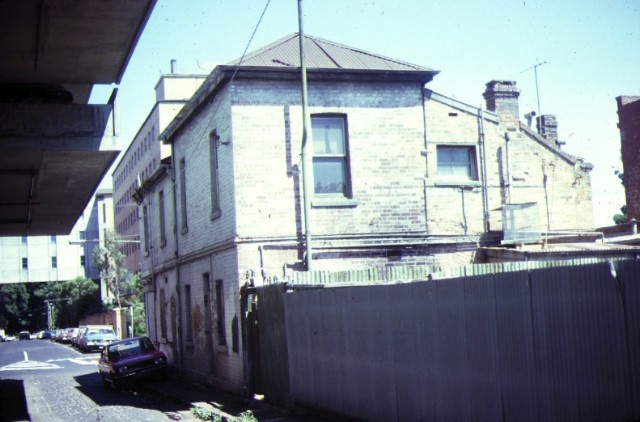 The former Devonshire Arms Hotel was erected in Fitzroy Street Fitzroy c.1843 by Francis Clark, businessman, land speculator and Melbourne City Councillor. The hotel received its license in 1843. The Devonshire Arms was constructed of face brick on a bluestone plinth with a hip-and-valley shingle roof. The original building contains early construction materials such as pit-sawn timber and hand-made nails. A stable and kitchen was added in 1849-50 and, given the good condition of the remaining shingles and the hand-made nails used in its fixing, it appears that the corrugated iron roof was laid at this time. It is likely that these changes were made in response to the 1844 NSW licensing regulations governing sleeping accommodation. The 1870 Licensing Act resulted in further changes to the building when the kitchen was built over by the residential wing at the rear. It appears that the building was rendered at this time and windows replaced with the existing large-pane double-hung sash windows. Later renovations added such features as the ground floor pressed metal ceilings, but the building retains many of its earliest internal features, including two early timber mantles with brick hearths, the hotel and residence stairs, the lath-and-plaster ceilings and walls, remnants of hessian wall linings and many doors and architraves. Externally the building retains its original bar windows, gutter brackets, hotel sign on the side wall and shingles (under the corrugated iron).

The former Devonshire Arms Hotel is of historical and architectural significance to the State of Victoria.

The former Devonshire Arms Hotel is of historical significance as a very rare remnant of the social fabric and built environment of early Melbourne and Fitzroy, as well as for its associations with Francis Clark, a prominent local businessman and land speculator, and JC Passmore, the establishment's publican between 1845 and 1847. The former hotel is located in the area of the earliest subdivision in the then district of Collingwood and still linked in context to the early residences of Gertrude and Brunswick Streets. Receiving its licence in 1843, it is Melbourne's oldest known extant hotel. The choice of name for the hotel provides a clue to the social origins of this earliest part of Fitzroy. Although Clark himself was born in Essex, he recognised that in 1840s Fitzroy, before the arrival of large numbers of gold-rush immigrants, a large proportion of the population hailed from south-west England. The choice of name reflects the important social function of hotels as gathering places and denotes the building as an integral part of the early Fitzroy community. The building provides a significant physical link to Melbourne's very early days as a frontier town, illustrating both the nature of the built fabric of the times and something of the character of social life.

The former Devonshire Arms' links with early Melbourne are emphasised by its associations with JC Passmore and Francis Clark. Passmore, the hotel's publican from 1845 to 1847, later ran John Pascoe Fawkner's Hotel, changing its name to the Shakespeare Hotel. In 1865 he became the licensee of another Devonshire Hotel, in New Street, Brighton.

Francis Clark owned the former Devonshire Hotel for approximately 50 years. He had arrived in Melbourne in 1840 and in 1842 became Manager of James Palmer's lemonade and soda factory. In 1845 he opened a butcher's shop near the corner of Bourke and Elizabeth Streets and later opened a shop in Richmond. Clarke appears to have made most of his wealth speculating in land and buildings in the Fitzroy and Alphington (now Ivanhoe) areas with the result that he died a wealthy man in 1896. The hotel provides a link with this early Melbourne identity, who was a significant figure in the history of early Fitzroy, being part of the agitation that led to the greater recognition by the Melbourne City Council of the area in which the Devonshire Hotel stood. Clarke was an unsuccessful candidate in the first elections for the newly-created Fitzroy Ward in 1850. However, he was elected to the Melbourne City Council in 1852.

The Former Devonshire Arms Hotel is of architectural significance as it epitomises the earliest traditions of building in the founding years of the state of Victoria. The building provides important evidence of the way in which the built fabric of Victoria developed, both in its display of early construction techniques and materials and because of its very early and primitive colonial forms such as the chamfered corner, the bar windows, and projecting roof eaves.