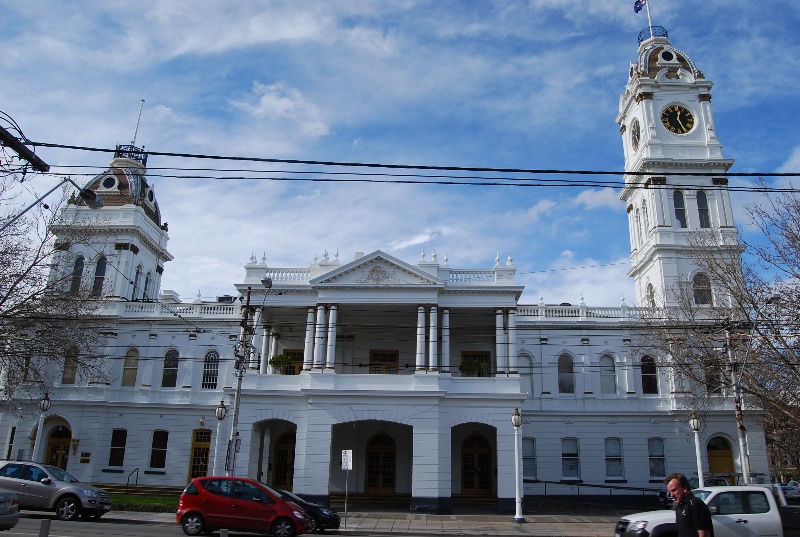 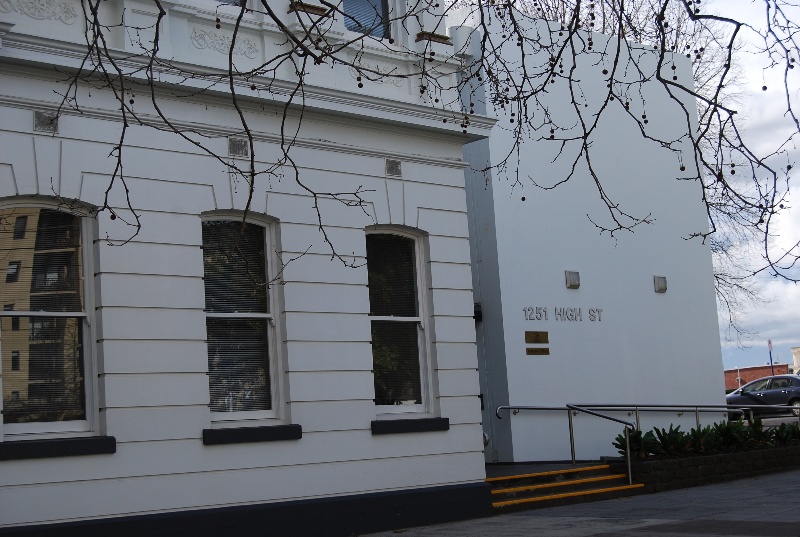 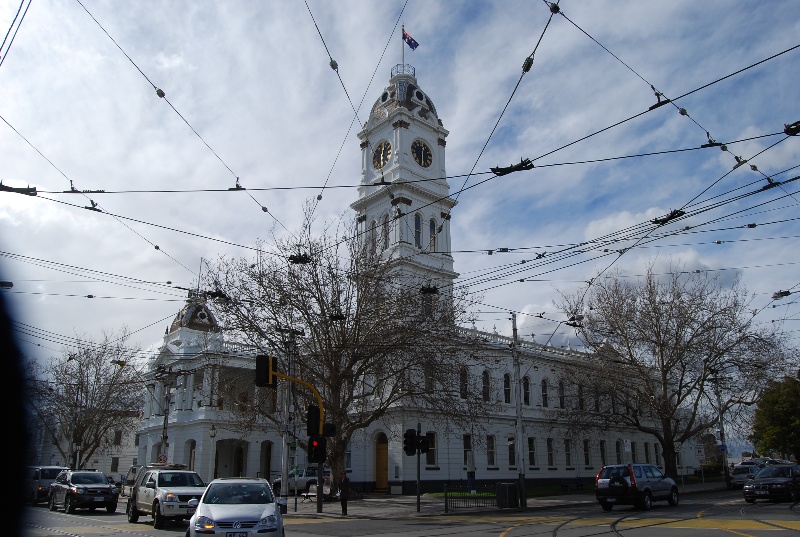 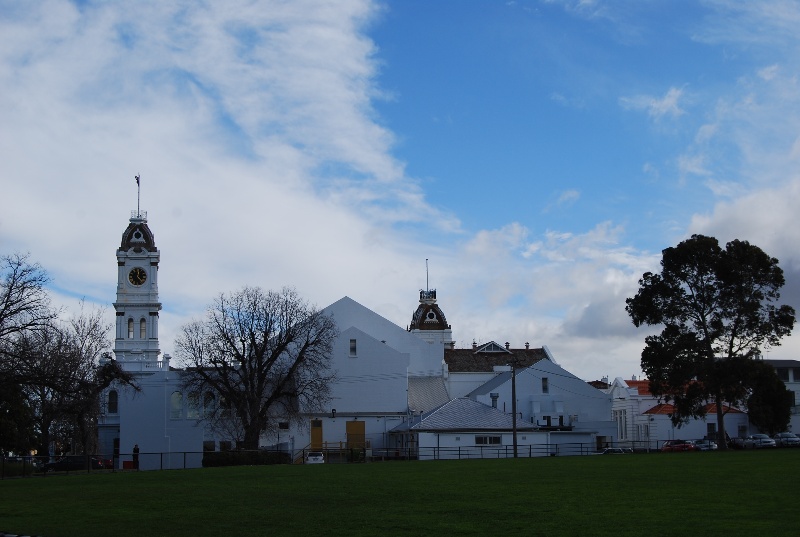 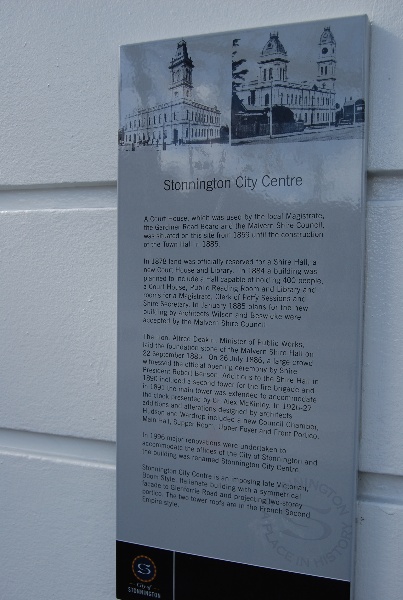 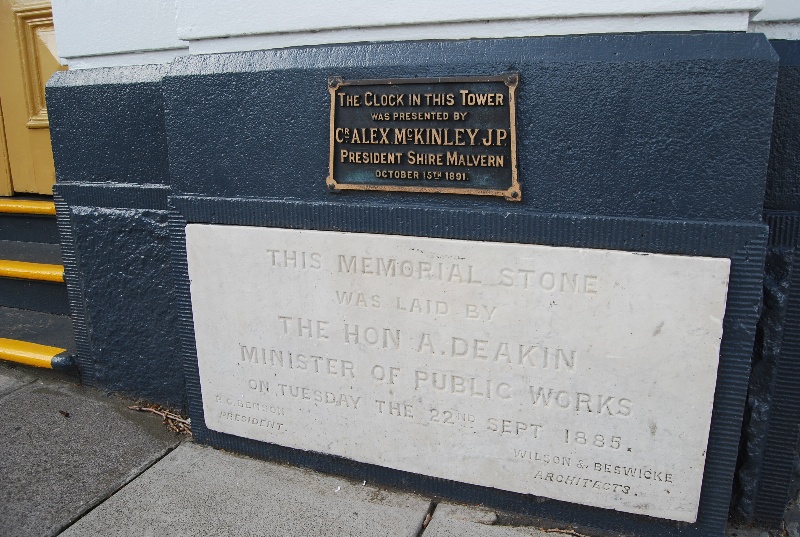 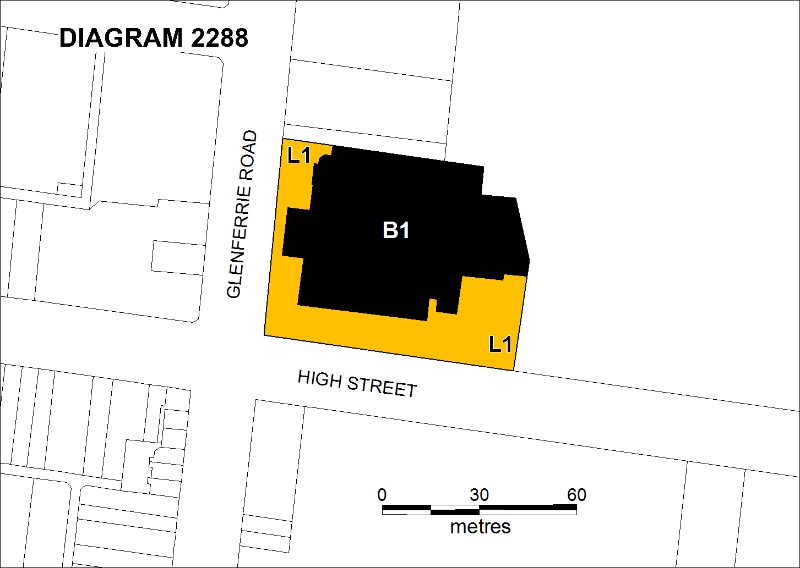 The Malvern Town Hall, situated on Glenferrie Road, Malvern, was constructed in 1886 to a design by Wilson & Beswicke, with additions in 1890 by Crouch and Wilson and internal alterations in the mid-1920s.

The Shire of Gardiner, which was proclaimed in 1871, became the Shire of Malvern in 1878. By the mid-1880s, the shire had a steadily increasing population of over 2500, prompting the council to move to construct a shire hall. During the late nineteenth century, many municipalities in Melbourne erected grand public buildings, a reflection of the civic pride and post-gold rush wealth of the era.

The Malvern Shire Hall was designed by John Beswicke of the architectural firm Wilson and Beswicke, who called for tenders for the building's construction in mid-1885. Beswicke was noted for his town hall designs, and following his work for Malvern, he designed town halls in Brighton (1886), Essendon (1886), Hawthorn (1888-9) and Dandenong (1890). The foundation stone was laid 22 September 1885 by Alfred Deakin, then the Victorian Minister of Public Works.

The Shire Hall was opened on 26 July 1886 in front of a large crowd, and celebrated that evening with a banquet attended by 400 people. The Renaissance Revival style building was described as having a 'very commanding and handsome appearance', though only one of the two planned towers had been constructed. The building comprised shire offices and hall, library, hall-keeper's quarters and court house, which was entered from High Street. In 1892, Crouch and Wilson undertook works to complete the building, raising the clock tower, and adding the second tower to the extension to the north. In 1911, Malvern became a city, and by the 1920s the Malvern City Council resolved that the existing building was no longer suitable for the needs of the municipality. Architects Hudson and Wardrop, who were responsible for the Shrine of Remembrance (H0848, 1927-34) were engaged in 1925 to design the alterations to the interior of the building, with municipal functions taking over the entire building. Opened in 1927 by the Governor of Victoria, Lord Somers, the works included new council chambers, a marble panelled foyer, the addition of a 'dignified' entrance portico and the enlarging of the town hall itself. The City of Malvern was amalgamated with the City of Prahran in 1994, and the building is now used as the Stonnington City Centre.

The Malvern Town Hall is an imposing two-storey Renaissance Revival style building comprising symmetrical facade with two-storey central portico and with French Second Empire style towers. The facade is rusticated at ground level with segmental arch headed windows and round-headed arched windows at first floor level. The clock tower and secondary tower feature mansard roofs with fish scale slates and cast iron walks. The parapet is adorned with balustrading and urns, whilst on the portico is a pediment with the City of Malvern's coat of arms. The remaining 1880s interior features include the terracotta tiled floor at the base of the timber staircase leading up to the first floor library and clocktower from Glenferrie Road and the library ceiling and fireplace. The interior dates mainly from the 1927 alterations, with 1990s office fit-out in the High Street wing. The foyer features a terrazzo floor, marble panelling, a central marble staircase, and an elaborate coffered ceiling, which is repeated in the first floor foyer. A c. 1927 war memorial statue by noted sculptor, Paul Montford, which depicts a uniformed man and a young woman with a baby is situated on the ground floor.

The northern wing of the building retains offices from the 1920s alterations: the Mayor's room, meeting rooms, dining room and council chambers. The council chambers features timber panelling, curved tiered timber gallery, timber furnishings, and an enriched vaulted ceiling. The 1927 hall has a segmented vaulted ceiling , gallery seating, and the stage has a simple proscenium adorned by the council's coat of arms. The banquet room is a smaller, simplified version of the hall, and features a small stage with proscenium and the City of Malvern coat of arms,contemporary pendant lighting and panelled plaster ceiling decorative work.

The site is part of the traditional land of the Wurundjeri people.

The Malvern Town Hall is of historical and architectural significance to the State of Victoria.

The Malvern Town Hall is architecturally significant as an outstanding and relatively intact example of a grand nineteenth century town hall building, built in a Renaissance Revival style with French Second Empire style towers and interwar internal decorative schemes. The Malvern Town Hall is an outstanding example from the group of late nineteenth century town halls which were constructed across Melbourne in the post-gold rush era.

The Malvern Town Hall is significant for its association with noted architects Beswicke and Wilson for its nineteenth century design, and Hudson and Wardrop for the twentieth century alterations.