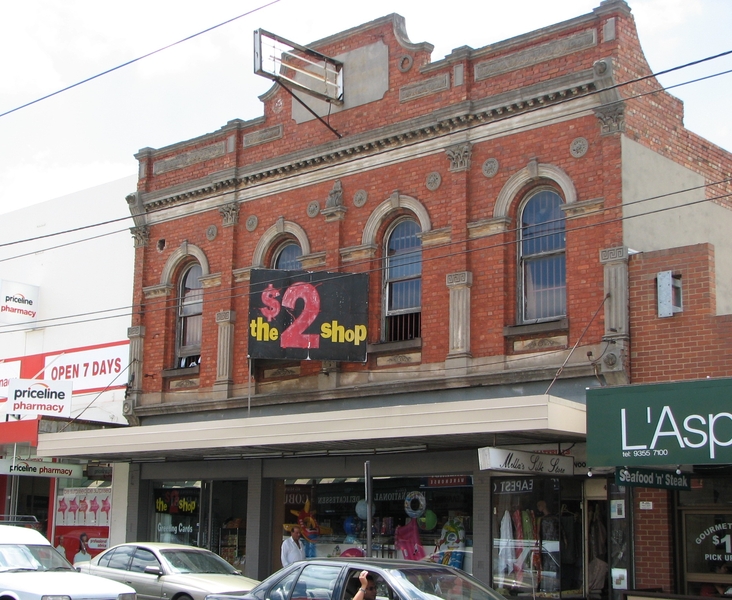 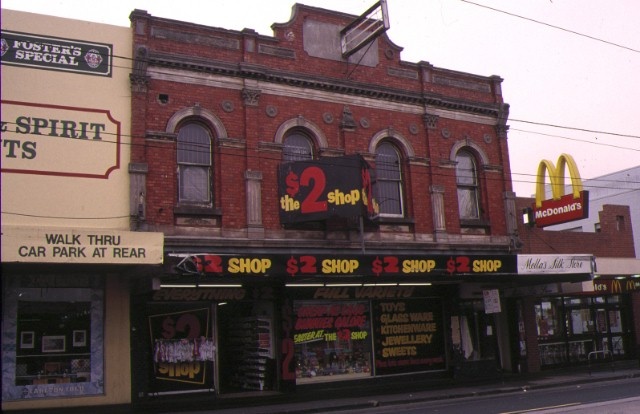 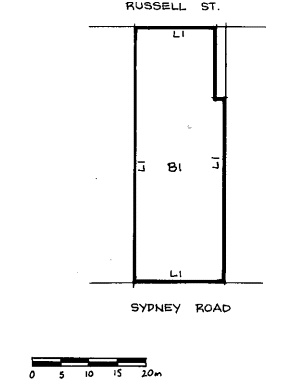 In 1887-88 Henry Bates, a furniture remover and general carrier, erected a two-storey brick building containing two shops, a livery stable and a roller skating rink. It was designed by Sydney H Wilson, architect, and built by T R Spargo of North Melbourne. The two shops flanked a central carriageway, which provided access to the stables behind. The upper level, constructed as one large open space spanned with delicate metal portal frames, and a timber board mansard ceiling, was used as the skating rink. After leasing out the skating the rink for about two years Bates used this space to store furniture, and in the 1920s it became a billiard saloon, then a physical culture school. During the First World War Bates leased the stabling to carrier, Mayne Nickless, and in 1932 the ground floor was converted into a large variety store (No.21) for GJ Coles & Company, and an adjoining small shop. At the same time the upper level became the short-lived Taj Mahal dance hall, and murals depicting exotic Indian scenes were painted on the walls and proscenium. This was the second decorative scheme to cover the walls of the hall, the first being for the roller-skating rink which is still discernible under the present painted surface. Coles' remained in the building until 1954.

The building is of historic, aesthetic, social and architectural importance to the State of Victoria.

The Bates Building is of architectural importance as a most unusual combination of purpose-built roller-skating rink, shops and livery stables. The upper floor skating-hall remains exceptional as a large space spanned by arched metal portal frames supporting the main roof. This form of framing is rare. The cement modelled horse heads features on the front facade and the decorative wheel motifs below the first floor windows, are pertinent references to the building's original use as livery stables previously located on the ground floor.

The Bates Building hall is historically and socially important as a rare example of a nineteenth-century roller-skating rink, a type of recreational facility once phenomenally popular in Melbourne and its metropolis. The former roller-skating hall is significant for its association with a phase in Melbourne's nineteenth-century popular culture when skating for both men and women, both young and old, rivalled cricket and football as a leisure activity

The Bates Building hall interior is aesthetically significant for its ability to demonstrate a sequence in popular recreational trends associated with the worldwide craze for roller-skating in the 1880s, and jazz culture between the wars. The Middle Eastern-inspired murals painted in a free-form vernacular style reflect the mood of popular dance culture of the inter-war period and its fascination with exotica. The more formal decorative scheme associated with the hall's use as a skating rink, which can still be discerned through parts of the present scheme, is important for its potential to yield information on nineteenth-century interior design and popular taste.