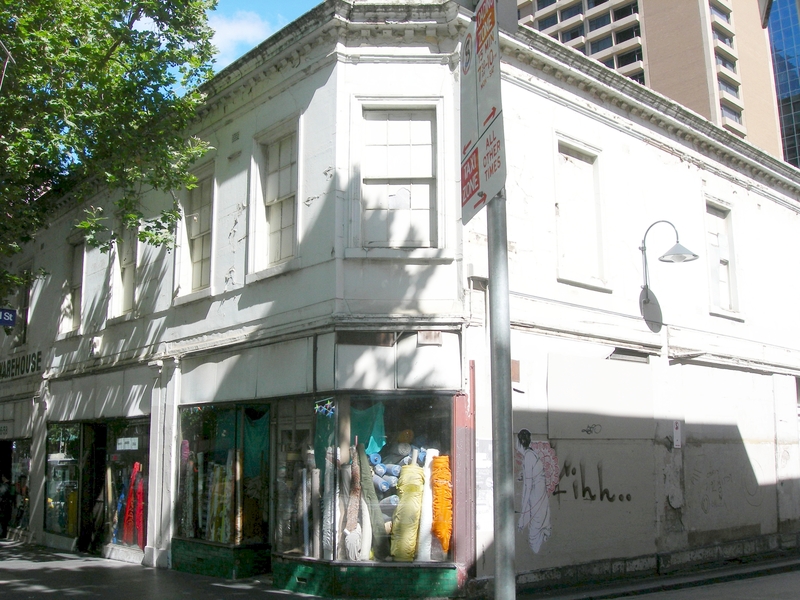 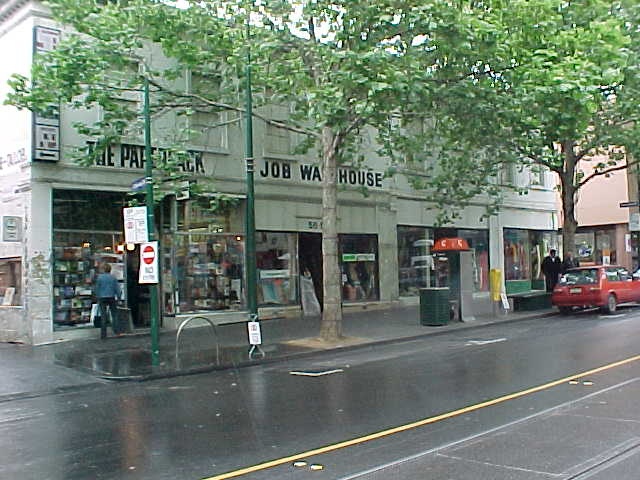 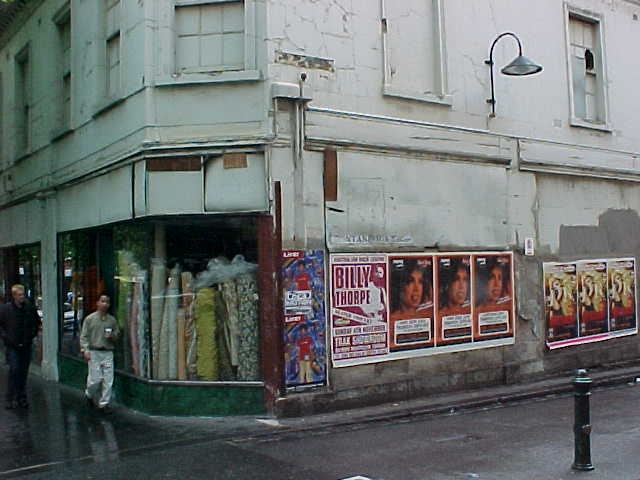 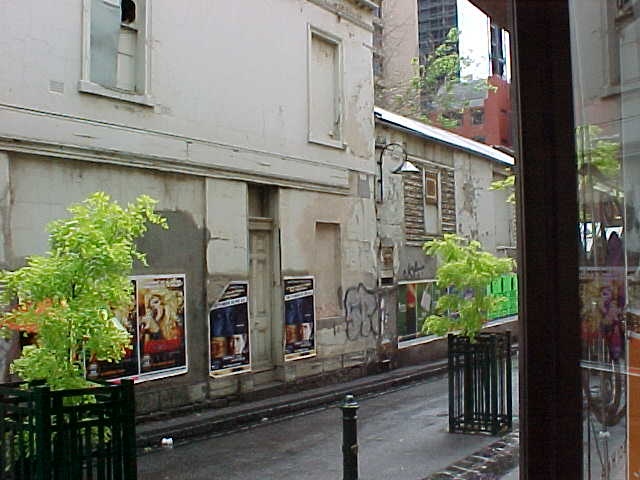 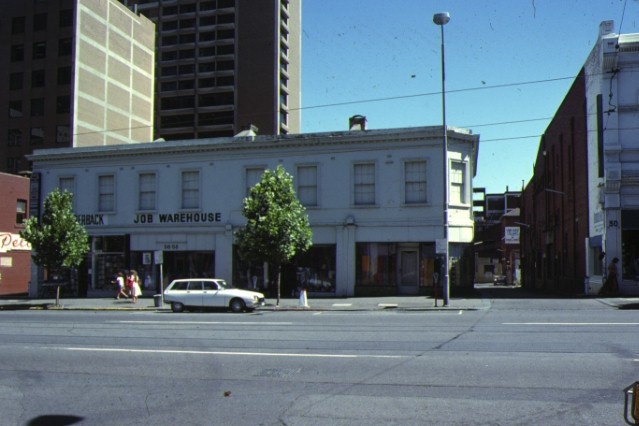 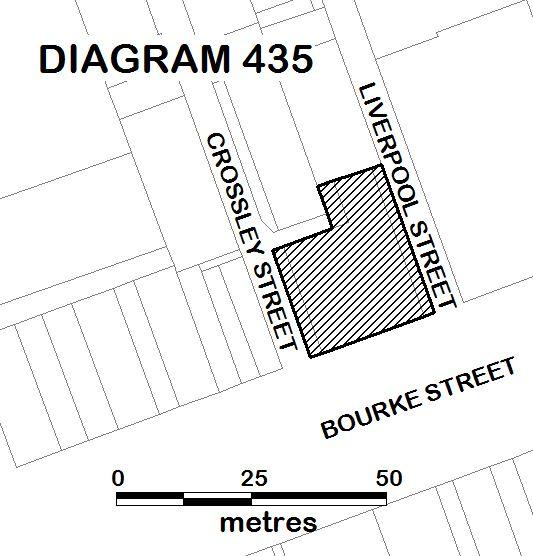 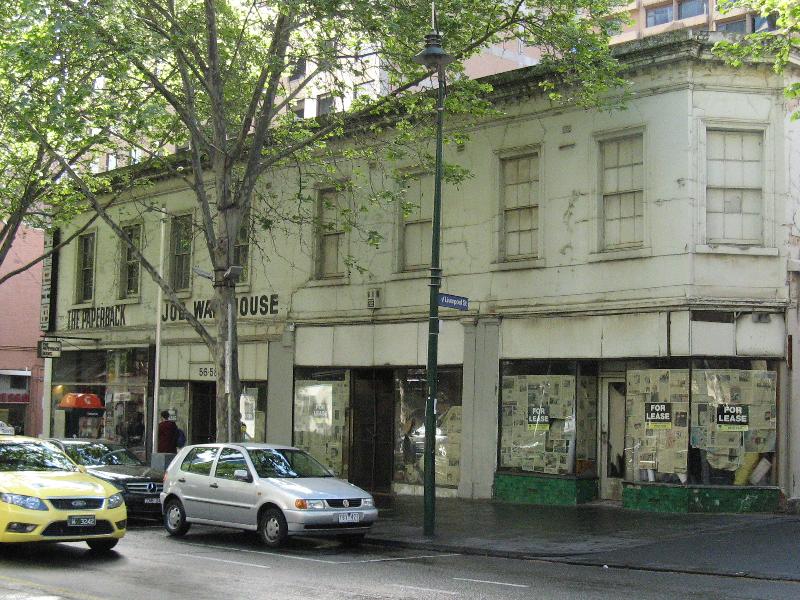 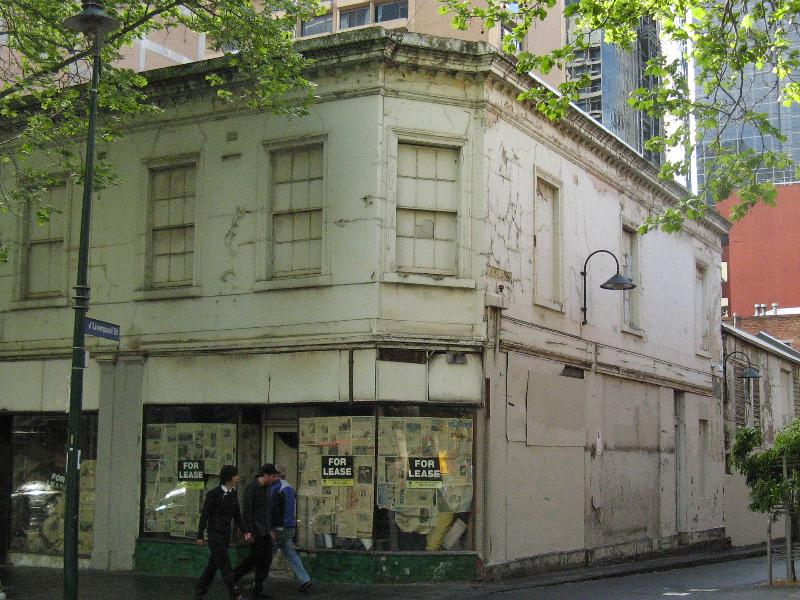 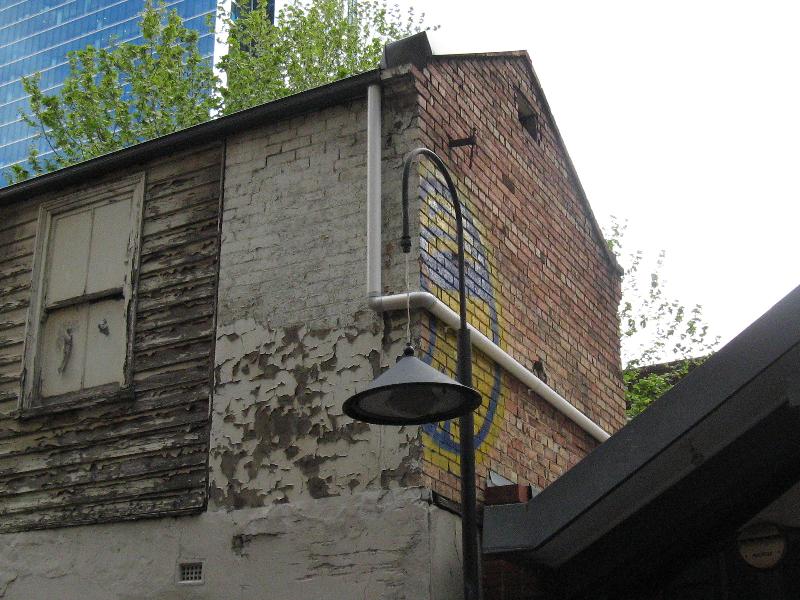 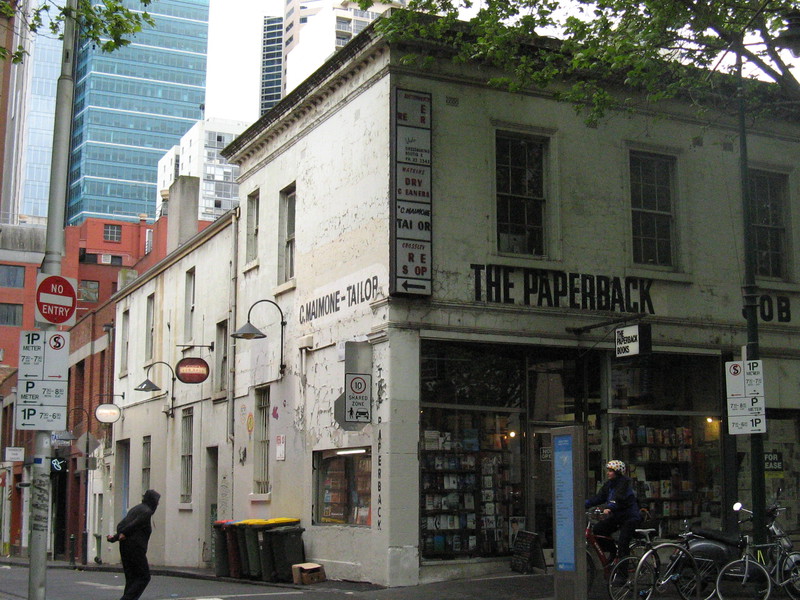 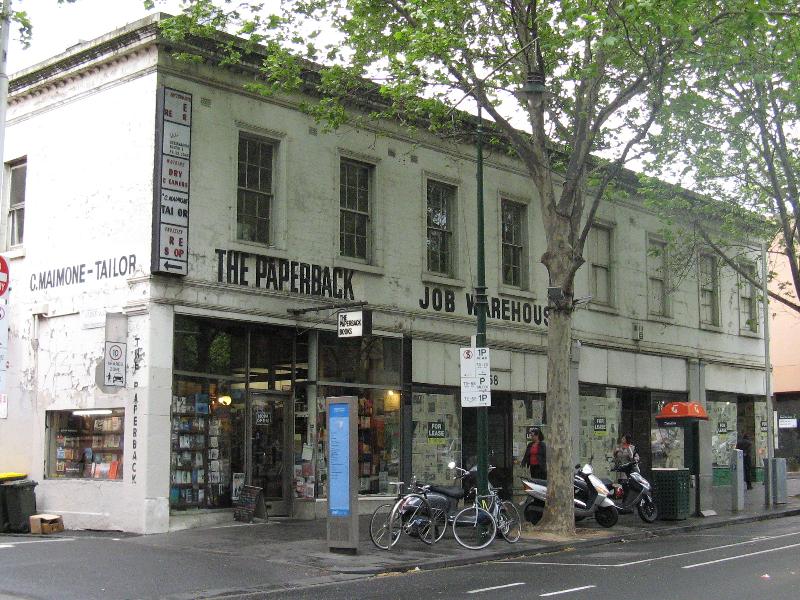 This row of shops was built in two stages. A large shop (which is now divided into two) and a residence above it were built on the Crossley Street corner in 1848 by a well-known butcher, William Crossley. The premises were used as a meat-preserving works, with the land adjacent used as a slaughter yard. The adjoining shops to the east were added in 1849 in the same style, so that the completed building extended between Crossley Street (then called Romeo Lane) and Liverpool Street (then Juliet Lane). The architect is not known. The shop on the Crossley Street corner was occupied in the early 1850s by the butcher Henry Crossley, and by Mrs Ann Crossley from 1855-58. Throughout the rest of the nineteenth century it was occupied by a succession of butchers, including William (later Sir William) Angliss (in 1896-99), and by a grocer and fruiterer until 1969 when it became a book shop. The other shops have been used since the 1850s by many businesses, including variously a shoe shop, drapery, photographic studio, cafe, grocer, wine and spirit merchant, tailor and mercer. The prominent artist Eugene von Guerard, who dominated Victorian landscape painting during the late colonial period, occupied number 56 in 1857-58, when he was beginning to establish his career as an artist. Several of the shops were occupied from 1956 by Jacob Zeimer, a post-World War II European migrant. He eventually owned the whole building, and Job Warehouse became well-known in Melbourne for its wide range of fabrics for home dressmakers, dress designers and theatre groups.

Job Warehouse consists of a row of four two-storey rendered brick shops in a simple Victorian Georgian style. The external render is ruled, there is a simple parapet and cornice above, and the shop on the corner of Liverpool Street has a splayed corner. Each of the four shops has a former residence located at the rear of and above them. The internal stairs which once led to the upper floors have all been removed, though a new stair has been built at number 60-62. Externally the building retains much of its original simple form, except for alterations to the shop windows, and the upper level retains original features such as the window openings and surrounds and the parapet. The interiors appear to retain few original features.

Job Warehouse is of architectural and historical significance to the State of Victoria. It satisfies the following criterion for inclusion in the Victorian Heritage Register:

Job Warehouse is significant at the State level for the following reasons:

Job Warehouse is historically significant as among the oldest surviving buildings in Melbourne. It is probably the oldest surviving shop row in the city and forms an important link to pre-gold rush Melbourne. The various businesses which occupied the four shops during the nineteenth and twentieth centuries reflect the residential nature of this part of Melbourne until the second half of the twentieth century, and the various businesses required to provide everyday goods and services to local residents. It also demonstrates the nineteenth and early twentieth century practice of people living in close proximity to the businesses which they ran. [Criterion A]

Job Warehouse is a rare surviving example of a pre-gold rush commercial building, and of an early shop row, a type which was once common in the city but has now almost completely disappeared. [Criterion B]

Job Warehouse is architecturally significant as an example of the small-scale austere Georgian style buildings typical of pre-gold rush Melbourne. This style was the basis for most architecture in Australia from the time of European settlement until at least the mid-nineteenth century, but is not common in Victoria, as after 1851 the wealth generated by gold soon led to the popularity of more ornate styles and the replacement of earlier buildings. [Criterion D]

One of the more quirky vestiges of old melbourne - so glad it still exists.

Jacob Zeimer died in 2005 aged 91, and his son David then took over the business. The shop closed in 2012, moving the best remaining fabrics to a warehouse / shop in North Coburg, but the family retained ownership (the Age 21 June 2012). In 2018 the interiors were cleaned out in preparation for occupation by a new lessee.