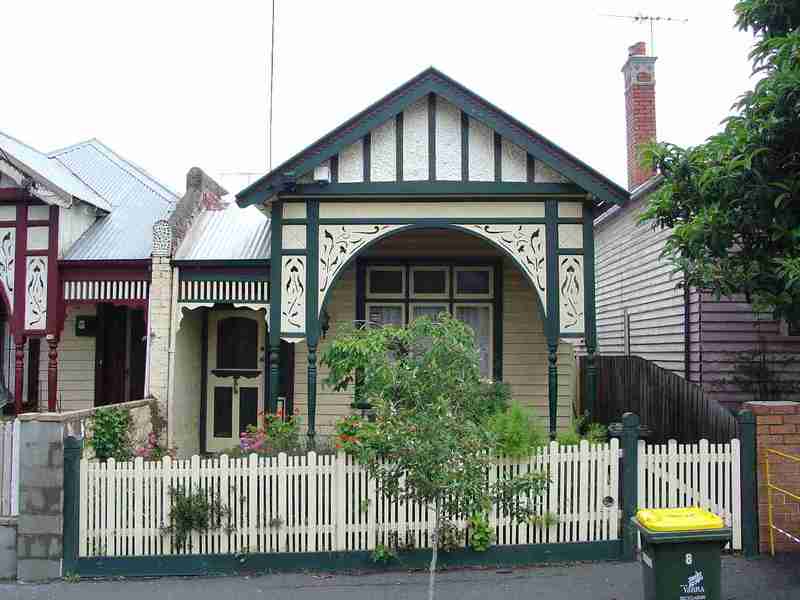 Elm Grove (originally known as Catherine Street), was created by a subdivision of auctioneer Charles William's Crown Allotment 20 in 1852. By 1855 it contained about 20 houses. The street held a number of distinguished Victorian-era architects, such as James Robertson and William Salway and noted builders like James Bonham and Richard Fitzgerald. Fitzgerald's house (3 Elm Grove, c.1868) is in the Gothic Revival style (48) and was reputedly designed by the celebrated architect William Wardell. The majority of this part of the portion was developed by the early 20th century.

By the late 19th century the street had a semi-mature avenue of elm trees, stone street channels and extensive timber picket fencing and picket tree guards protecting the street trees. The elms, which were planted for Fitzgerald, are said to have been the first suburban street avenue planted. They were replaced by plane trees in the 20th century.

The MMBW Detail Plan 1065 (1896) shows the Heritage Overlay Area as near fully developed with a mixture of masonry and timber, mainly detached houses with front verandahs. The street patterns are irregular, reflecting the many private subdivision that created them, and rear right-of-ways have been provided for service access. The Church Street perimeter (see Church Street Heritage Overlay Area) was lined with large houses that have since, in some cases, been redeveloped and their large land holdings subdivided (see McGrath Court, added onto the west end of Parker St). The Templeman Hotel (4A Charlotte St) was one of the few commercial buildings in the area (now a car park). Houses were set close to the street but are shown with fenced front gardens, footpaths were typically asphalt paved, street crossings were pitched with blue stone, but only Elm Grove was shown with street trees (planted in the footpath). Development in the area today is about 80% from the Victorian-era or Edwardian-eras, with a little over one third of those being from the Edwardian-era.

Later development evident in the Heritage Overlay Area includes an inter-war factory in Mary Street. Its good state of preservation allows expression of Richmond's rebirth as an industrial suburb in the 20th century, one of the key themes in the City.

. Well preserved buildings, including one storey houses and a one storey industrial building, from the pre Second War era;

. For its range of 19th and early 20th century housing, particularly a number of large Edwardian residences on elevated sites in the west of the Heritage Overlay Area, and smaller housing on flatter land to the east. Collectively they stand out from the surrounding area as a cohesive group of residential buildings which are of aesthetic and historical significance within the municipality;

. For the elevated siting of parts of the precinct on Richmond Hill, providing commanding views, access to sea breezes and an ideal siting for residences of influential persons until well into the 20thcentury. These included architects James Miller Robertson and William Salway and the Richmond builder and timber merchant Richard Fitzgerald;

. For the contribution from some well preserved inter-war buildings such as the factory in Mary Street as a significant reminder of the mix of industrial and residential development that was so common in Richmond by World War Two, and the individually significant places of all eras; and

. For the bluestone street elements as an enhancement to the historic character of the Heritage Overlay Area, as aided by mature street plantings (planes) in Elm Grove.