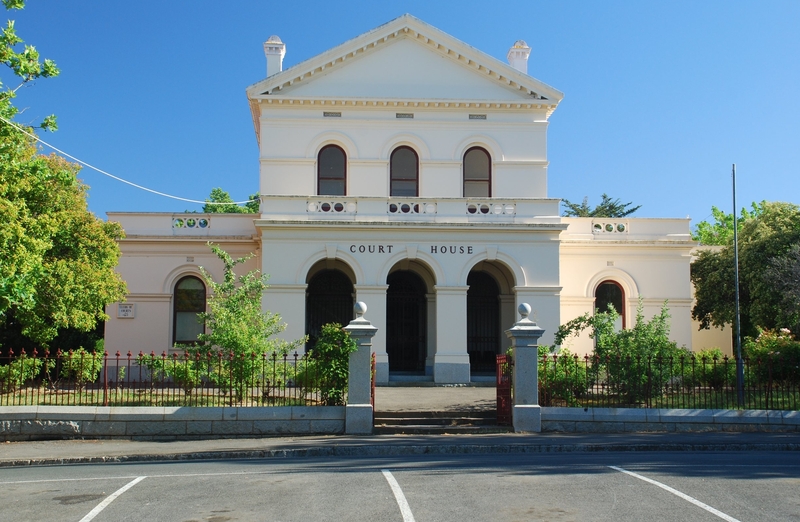 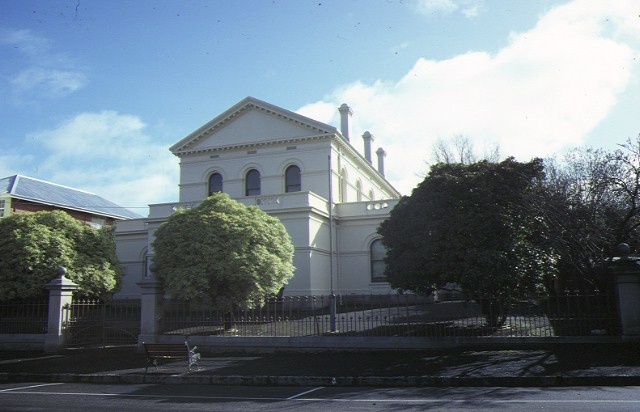 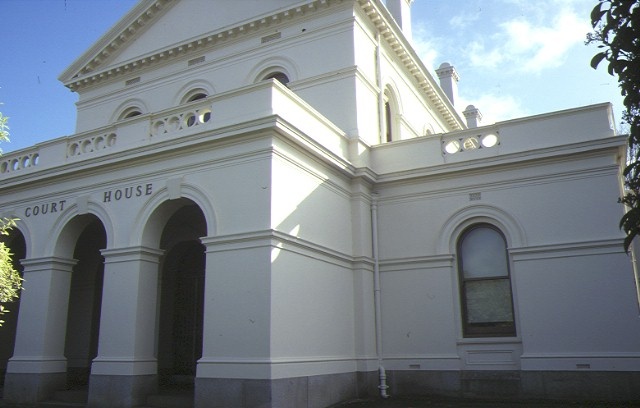 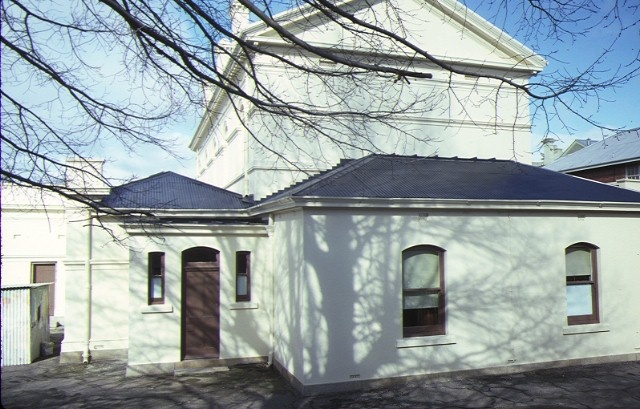 The first court building on this site was built in 1858. Previously courts had operated from the old Courthouse in the Commissioners Camp. This courthouse was similar to the courthouse at Beechworth, with a small front porch, a single side wing (and cell) on the east side, and stucco quoining and mouldings. A smaller police court stood to the west at the same time - this later became incorporated into the School of Mines in 1889. The new courthouse was designed by John Hudson Marsden, Public Works Department architect from 1872 till after 1900. It was completed in 1878-9, to provide services for the Supreme Court and County Court, including sufficient offices and facilities for juries, which were now required in the larger regional centres such as Castlemaine. The front porch and the palisade fence and granite gates were added in 1879. Other alterations including addition of a gallery over the south end of the courtroom, and a jury room and box on the west side, were made 1883-4. The courthouse is still in active use.

The Courthouse is situated in a precinct of government buildings dating from as early as the mid 1850s. William Wardell, who headed the Public Works Department during this era, was called upon to cut costs, and pursued a design policy of "the simpler the better -so long as proper architectural effect is preserved". In keeping with this policy, the design of the Castlemaine Courthouse is executed in a restrained Free Classical Style. Other projects of the period such as Maryborough Post Office and Courthouse, and St. Kilda Post Office, reflected a similar aesthetic. The painted stuccoed brick building rests on a base of massive blocks of finely tooled basalt. Plain horizontal mouldings encircle the building at imposte level of ground floor openings, and at sill and imposte levels of the clerestory windows which light the court room. Plain cornice mouldings adorn the front porch and the flanking wings, with circular penetrations in the parapet. The front gable of the court room features an austere triangular Roman pediment with dentil ornamentation.

The courthouse is entered via a triple arched porch, then through wrought iron gates in three similar arched openings to a lobby. Curved stairs lead from the lobby to a mezzanine and office above and from there to a timber seating gallery supported by timber columns in the back of the courtroom. The courtroom is similarly austere, with plain walls and ceiling, and furnished in light coloured timber with simple mouldings. The offices which flank the length of the court room have hip roofs hidden by parapets. A holding cell block in similar style extends out from the right wing. A half hip extension for the judges chambers projects from the rear.

The Castlemaine Courthouse is of architectural importance as a fine and intact example of the restrained Free Classical style civic architecture of the Victorian Public Works Department under William Wardell's leadership during the 1870s. The building is exemplary in its careful and classical composition combined with the use of a restricted palette of simple classical elements.

The Castlemaine Courthouse is of historical importance for its association with the maturing of a number of important goldfields towns in Victoria as regional centres. In Castlemaine this maturity was heralded by the establishment of a substantial civic precinct, of which these Supreme Court and County Court facilities were an important component. The facilities for juries and for Supreme Court hearings were indicative of Castlemaine becoming an established regional centre.